yeah thats what I’m doing at the moment since it works for this current case, but hopefully theres a fix, since 10.5" by 10.5 squares aren’t the largest things I cut…

Curious–does it do it with small shapes that you place in that corner? That will help confirm it’s a mechanical issue if repeatable regardless of file/image size.
(And with small shapes, you can test the motion just using small scraps, and not a whole board!)

And if it’s due to the door magnet, you should see it happen on the bottom left corner, too–or have you already tried that and it only happens on the right corner?

I honestly haven’t tried yet. Im on a little bit of a time crunch today and started cutting these squares and noticed it. I mean this square file is cutting fine now that its about an inch and a half from the far right. 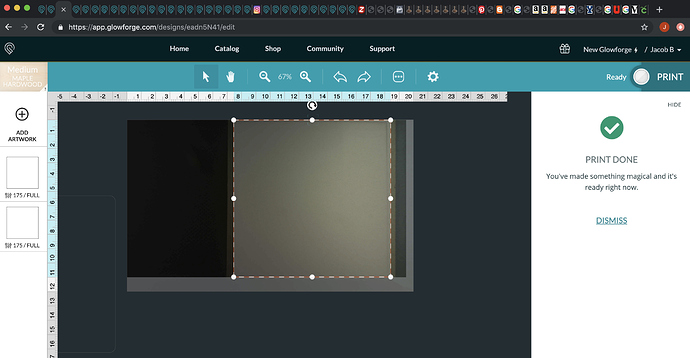 Have you ever done the camera calibration?

Theoretically, this should make things more accurate, I think - if your system is bumping due to a general positioning error.

I find it hard to believe the door magnet is strong enough to pull the entire gantry, especially while powered and driven by the steppers.

Still, I’ve been wrong before…

Several machines have had the front right bumping issue (I would agree it’s not magnet related). Not a lot, but it’s happened before. But, I don’t think I’ve heard of it since the camera calibration tool came out.

No I have not done a camera calibration as this is the first time I’ve noticed a strong, literal swerve in the cut.

this is the first time I’ve noticed a strong, literal swerve in the cut.

If it were that simple a design issue we all would be having that problem. If you are not using extra magnets then I would doubt some major design problem like that/

What would be my first suspicion is some loose piece of material causing a mechanical problem. If you turned off the machine and gently moved the head to that position you should be able to see it or at least feel it bump. If you can repeat the issue with the machine off and in the open it should be a lot easier to track down, and likely be an issue that would only be visible when the head was in that position.

How far off is your graphic overlay to your actual cut most of the time?

I’m not 100% sure if the camera calibration would fix it.

I would probably turn the unit off, back on, let it calibrate. Take a picture from overhead that shows where the head comes to rest after it’s done calibrating.

Here is the link for the camera calibration though (for later).

I moved the head both left and right, back and forward in the area the problem is being cause and felt no bump or saw any material in the way.

I mean its usually off maybe 1/2 an inch or so and yeah i will definitely calibrate the camera when I get a little free time, but I’m not quite sure how that would fix it. I’ll test out some smaller shapes in both corners, and most likely the gift of good measure for the support team at GF and see what happens 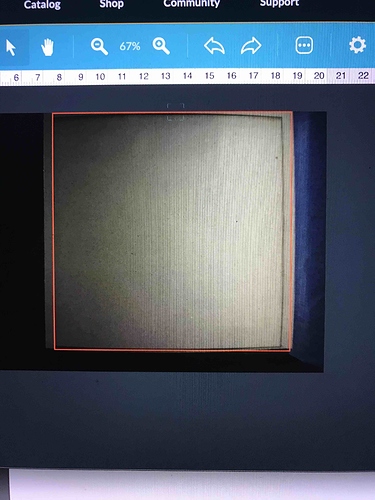 If you’re off a half inch, that could definitely be part of the problem, or indicating a problem. It’s simply sending the head too far forward.

Got a few things going on. That warp in your last picture is really odd.

See if you can grab that overhead picture of where the head parks after it has calibrated.

A close interior inspection is definitely in order as who knows what may be knocking about Where you cannot look yourself a phone camera or even a cheap endoscope sold for such inspections might be worth the effort.

I’m sorry you’re having an unexpected result in your prints in the bottom-right corner of the work area. It looks like you’ve already received some excellent advice from our other community members. Thanks folks! As others have mentioned, doing a very detailed check for any debris that could cause a bump in motion is a great idea.

Since your prints are landing more than ¼” away from where they were positioned in the preview, I agree that recalibrating the camera in your Glowforge would also be a good place to start.

To get started, click on this link: Launch the Camera Recalibration

Should you finish all of these steps, and find that you have an alignment error of more than 1/4", please measure the accuracy of the camera and send us a screenshot of the results.

Please let us know how it goes!

I see that I’m not the only one having the same problem. Mine started a while ago just for no reason and my only solution to the problem was to just stay away from that corner whenever I work on the laser.

sorry if akin of comment from patient to Dr that “it hurts when I do this”, and Dr responds “well, stop doing that”

As I tell my patients, it’s almost always the right answer… “or at least, stop complaining about it when you do do it!”

Oh, but complaining is so much fun! Many make it into an artform or their entertainment