Praise be to Sol… 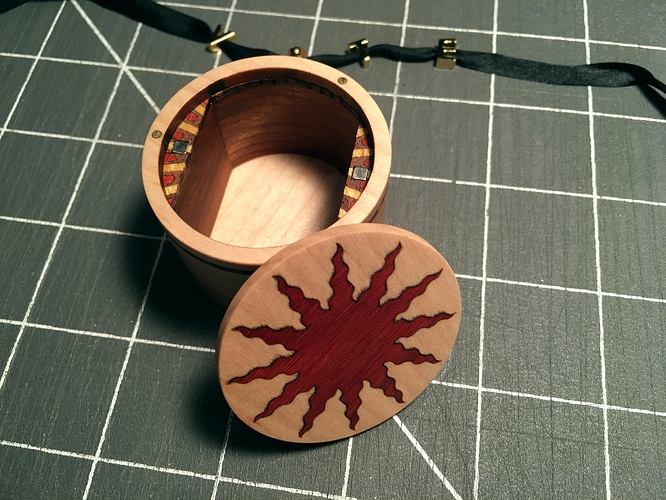 If you like sci fi and haven’t started Raised By Wolves on HBO, boy are you in for a treat.

The religious faction (The Mithraics) are a bunch of awful patriarchal zealots, but they sure have great brand identity. I wanted to do an inlaid box and the Mithraic sun was an easy decision.

It all started with this idea for a highly inlaid layer, I used a technique similar to the one I used in my heavily inlaid box, I inlaid the 1/16" accent layer first and then cut the shape out of the glued up inlaid piece. You need to be pretty solid on jigs and kerf correction techniques here, if you make it too tight, the 1/16" stuff will crack easily. Kerf gets thinner as material thickness decreases so your standard correction for 1/8" inch material will probably be too tight. Experiment first.

Ah, here we are at the entire point, I wanted this accent line to be tiny pips of colored woods. 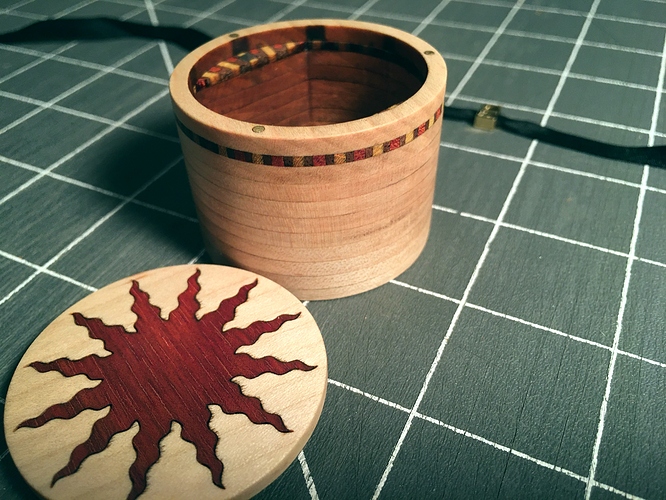 The lid with the mithraic sun is a little different from how I usually do things. I’m a fan of through-cut inlays, I don’t like to engrave pockets as it is usually too fiddly. I had some thin bloodwood, so I decided to try it as a pocket engrave. As you can see, the pocket has some dark fringing (wispy black discoloration near the rays of the sun), probably due to my efforts to clean the surface of the maple after engraving. Regardless of the cause, through-cut inlays never give me this problem, so I will likely go back to my standard methods next time. In reality you can’t really notice the fringing when you have it in your hand, it just looks like a crisp engrave… but I know. 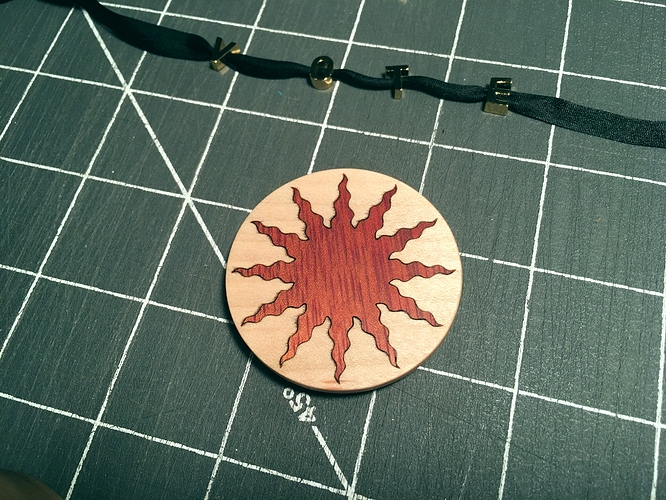 So yeah, that’s the box. Special shout out to @shogun for hooking me up with this nice piece of maple. And really, if you are info sci fi and aren’t watching Raised By Wolves, you are missing out.

Bonus (very tiny spoiler so blurring), here’s what the Mithraics look like. I mean COME ON, those outfits are outstanding. 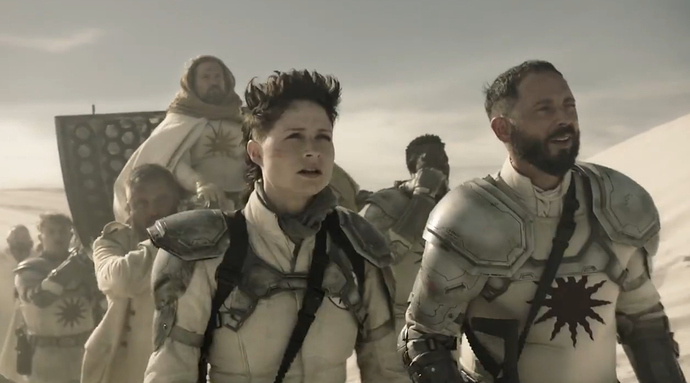 What a great little project. The inlay work is really nice. I’ve watched the first episode. Guess I need to get busy!

i’d watch RBW (even more interesting because that was my bass player’s old band’s name), but HBO and amazon can’t seem to agree on streaming being allowed on the FireTV. so maybe if they ever come to an agreement i’ll give it a shot.

Apparently the workaround for roku is to mirror your phone and stream hbo through the app. Might be a similar workaround wiht fire stick?

there seem to be some hoops out there, but i think on iOS it requires jailbreaking and i’m long past messing with that kind of stuff.

i’m long past tired of all the provider/streamer/hardware wars. “free” market doesn’t feel that open.

well, i was wrong, there’s a way to “side load” an android app on amazon fire. 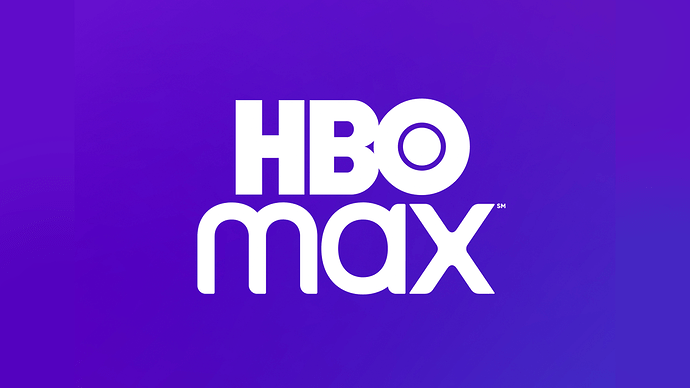 How to Install HBO Max on the Amazon Fire TV, Fire TV Stick, or 4k Streaming...

Amazon may be blocking HBO Max’s release, but that doesn’t mean you have to wait!

Love the feature ring on this. Very nice work and I will check out the series soon.

Ah that side view is lovely, the pips turned out great.

As always, eye candy for the wood lover. I agree with @shogun about the feature ring. Just enough pzazz.

Reminds me of this guy’s outfit. 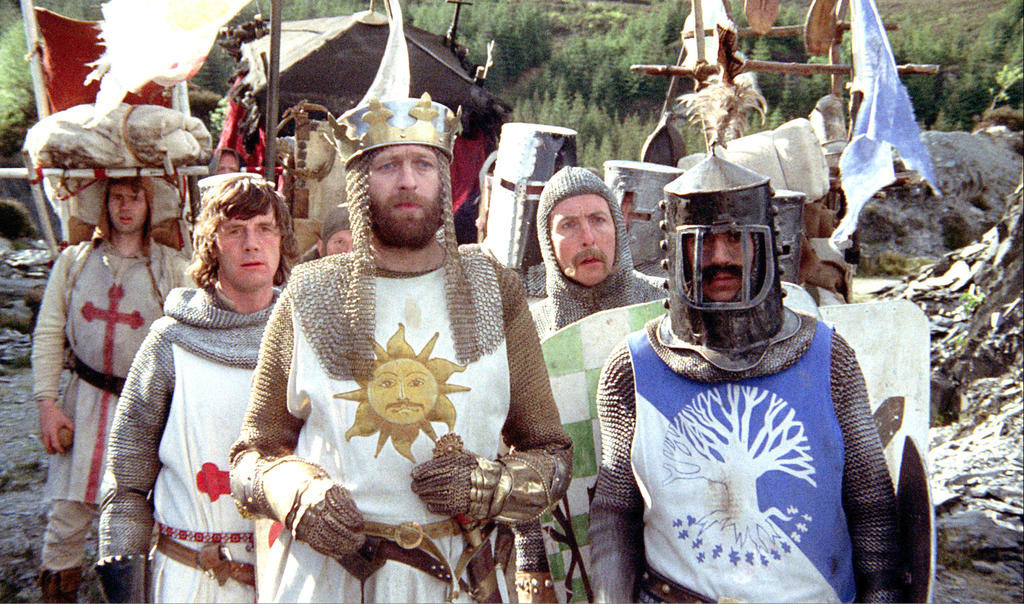 Great show. Has a bit of a Warhammer 40k vibe to it.

It’s a lovely box. A tiny bit disappointed it wasn’t filled with mithril though (I’m probably showing my age here, as I was not familiar with Mithraics).

Great work!
I wonder if running a vector outline around the engrave would produce a clean edge like a cut-through…

I wonder if running a vector outline

Yeah I considered that. I really do think I should have masked it first and avoided having to clean the surface. Fact is I knew that a through cut on a simple shape like this was the right thing to do but I really wanted to use that Bloodwood, so idk.

In the end I still really like the outcome, so I’m going to call it a success

I do believe I wore a purple jumpsuit like this in 1989.

Your inlay is fantastic . The detail inside the box is a neat surprise inside.

vector outline around the engrave

Would that require two separate operations? Such as, engrave and then score/cut as a separate run? I don’t know how I would have a line indicating score and another right on it indicating engrave. (Hey, I only just figured out the whole color thing for controlling actions.)

Would that require two separate operations?

Generally yes. I’d do them back to back. I find that if you overlay two paths and have them both doing things (engraving or cutting) the UI software does unexpected things. I’d just convert it to cut with a low power as a second action.