LED Acrylic Doesn't Lit/Glow All the way to the Top 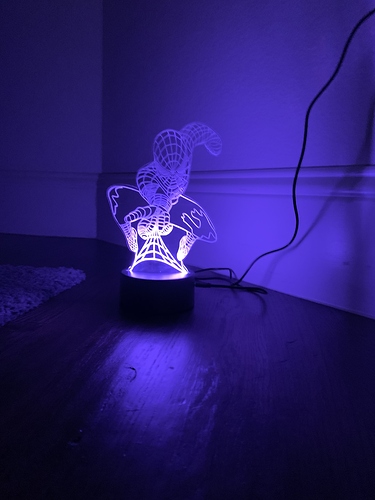 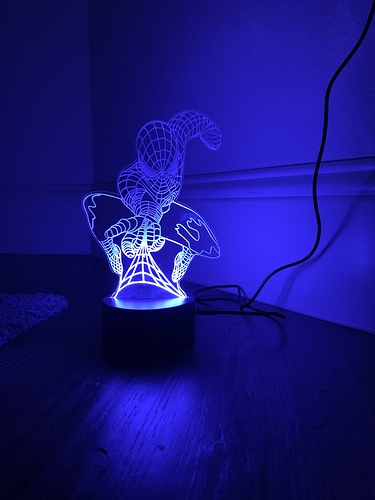 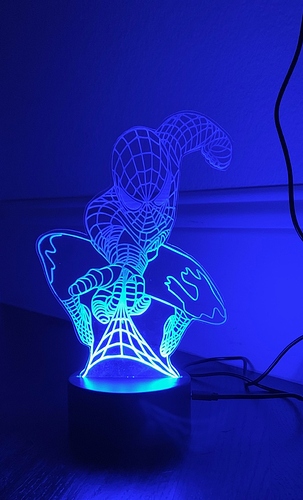 Issue # Made a flat base and it does touch the LED base , but does not lit clearly all the way up.The Image I made is about 6 inches.Engraved using SD graphic setting and the outcome of the engrave is good.Can any suggest what I could be missing ? If I flip or twist around the image , I can see the light passing through , but just doesn’t show the top half of the image clearly.Will attempt to upload pictures shortly.Any suggestion is greatly appreciated.

Pic? Maybe we can make some suggestions.

A lot of things come into play including the number and depths of engraves and the overall shape.

Thank you for the response.

Just added the pics.In pictures, I think they look OK

…but if you notice , the top half of the image is not as clearly lit as the bottom though they are visible.Let me know your thoughts.Thanks again!

It’s a depth of engrave issue. The lower portion of the engrave interrupts the light and doesn’t let it get to the top. More powerful LEDs might get there but then the bottom will be washed out.

The solution is to create a gradient engrave where it’s deepest at the top and shallowest at the bottom. That lets the light get to the top part of the design before it gets refracted.

You’ll need a gradient image and use a vary power engrave.

Thank you! That information is very helpful.So the engrave options you mentioned are only available for image/jpg artwork.The file format i used is .svg and used the default engrave settings from GF using SD graphic.Per your suggestion , making the same svg file to jpg and upload as an image to explore vary power options would do ? I will research on gradient image.

Specifically, black at the top fading to grey towards the bottom.

Thank you!!! Will try the gradient option with black (top) fading to gray (bottom) on the .svg file and see if that works.If otherwise, will switch to uploading an image file with a cut outline and use the vary power engrave.Will update the findings in the post.Thanks again for the swift responses.

Suggest you use some scraps to test the level of grey needed to make sure it looks right. Just a simple long, thin, rectangular grid, for example.

My first edge lit creation Made on a Glowforge

Nice job! Acrylic is so much fun! So I made 20 or so of these this Christmas for all of our nieces and nephews and some of their parents as well. Many of which I also purchased from 3 Bee Studio. To your point about making the bottom catch less light, I tinkered a bit and ended up applying a gradient of 159, 159, 159 through 255, 255, 255 then rasterizing that (since the the app can’t handle vector gradients at this time) and doing a Varied Power engrave at 1000/100/340. It definitely made …

Also, your cut will likely preclude light from getting to his left arm (on the right). Spidy’s face, sure. You can probably hit that with a gradient. But his left arm, I don’t think light’s going to transmit there because you’ve got a break between the arm and the leg. I’d probably end up doing some sort of lava lamp shape for the cut to get the entire Spiderman in it… Connecting the edge of the base, to the knee, to his head on the left. Connecting the right edge of the base to the knee, to the wrist on the right. Something like that.

Thank you !! still new to this

trying to understand your comments in regards to the gradient settings of 159,159,159 thru 255,255,255 ( is that in the software like illustrator or photoshop) applied on the image file ? - I will be researching into gradient options.I attempted to apply the gradient to .svg file , but now hesitating to print it out with the comment of since the app can’t handle vector gradients…Will attempt to convert that into an image- apply vary power and check it. 1000 is speed , 100 is precision power and 340 is lines per inch ? Vary power is set at maximize quality.I am going to attempt to test it out tomorrow on the same image to study this better for future projects. 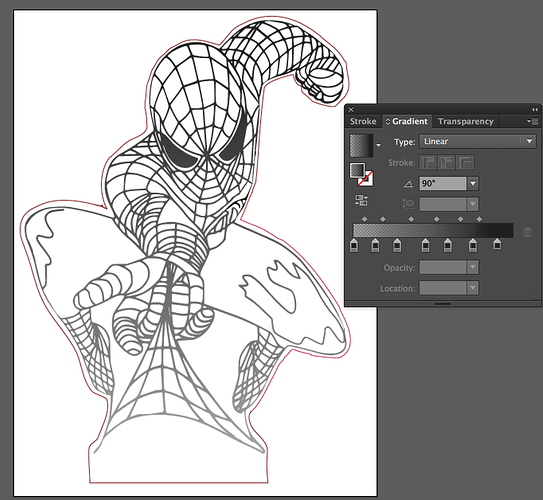 In Illustrator , I was able to apply the gradient as in the picture attached…do you think this vector will work ? or make it an image and do the vary power is the only option. 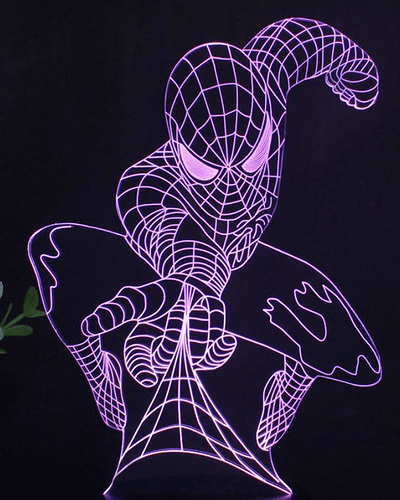 Original from the Internet - trying to replicate the light travel from end to end.

Well also you can’t rule out photoshop in that pic.

But yes making your acrylic actually touch the led will also make a difference.

You’re on the right track with all of this. You do need to convert to a raster image, vector gradients don’t work.

I moved this topic to beyond the manual so we can freely discuss non-PG settings.

If it were me I might drop the speed down from 1000 to get more consistent results with those thin lines. Something like 600speed/50power/270lpi/vary power/1x should give you a good consistent result. Sometimes high speeds don’t render vertical lines very well, slowing things down reduces that issue.

Thank you!!! Did a morning read on the gradients! Good learning curve.

Yep. In my case I used Illustrator. But since you’re already dealing with rasterized images, either should get the job done.

do you think this vector will work ? or make it an image and do the vary power is the only option

Unfortunately, at this time Glowforge cannot work with gradient vectors, so you have to rasterize it. But you’ve definitely got the right idea.

Still, I don’t think your cut will work. I mean, I guess it’s possible. I just don’t see how light could possibly get to the upper-right without contiguous material from the light source to the destination. I’d cut as I described earlier. Feel free to give it a shot as-is though!

Original from the Internet

I’m gonna go ahead and call balderdash! (But, kids… I didn’t say “balderdash.”)

There’s no frickin’ way that’s an actual image of what’s possible with a normal LED base. That’s either a special light source, a great photographer, a great post-production editor, or all three. Expect something pretty damn good. I mean, you’ll be happy with the result and all. But don’t expect that.

Looking forward to seeing your result!

It could also in theory be special acrylic. There is light-channeling and light/scattering acrylic that is designed for this sort of application. Also we don’t know how large that is in the photo nor do we know if it has a contour cut or if it’s just printed in a solid piece of acrylic.

I’ve not seen great difference between types of acrylics, there are a couple of dude by side tests out there that I’ve looked at but it’s hard to tell a difference.

I agree with you, I still think photoshop is most likely.

I was growing for some ideas and found it in pinterest …so could be some special designed LED.Sharing the link below. 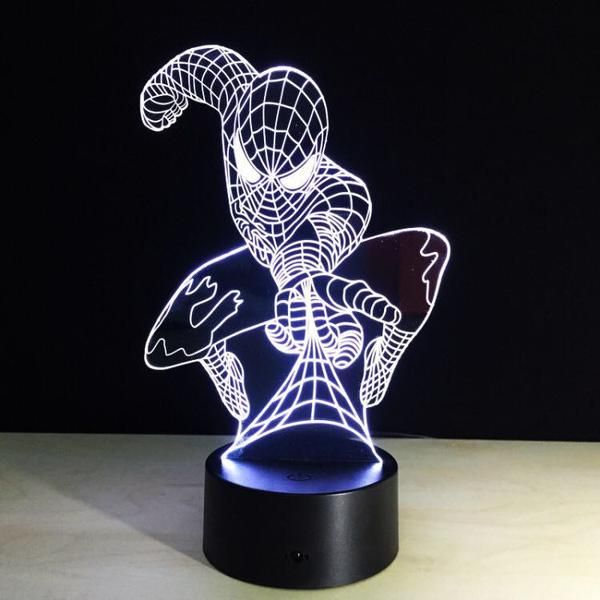 Our energy efficient 2D LED lamps are designed to trick your eyes and make you and your guests see a 3D figure. Our beautiful design will be a centerpiece in your home. We guarantee your friends and family will be impressed. The lamps are...

I didn’t do any post design , for any of the new readers…I simply did a screenshot of the image , loaded it in Inkscape , converted to vector by tracing the bitmap and moved it to illustrator to do cutline and some clean-up.With the help of the all the above suggestions from great minds, I am going to reverse the process by taking the final vector to back to jpg / raster image after applying the gradients and give it a try.Will keep you all posted on the progress.Thanks again!! Right in time to say - Happy Thanksgiving !!! to you and your families.

I didn’t do any post design , for any of the new readers

No I was saying that I think the image on pinterest may have been photoshopped. You may be trying to reproduce something that never looked that way in the first place. There are some physical limits to edge-lighting and how light works in general that makes truly uniform lighting of a side-lit acrylic sign almost impossible. You can combat it a bit with some clever gradient work, but there will always be some level of drop off just because of light dispersion over distance.

I can only assume that his led was on brightest option and, his leds are stronger and or it’s a picture filter that gave it’s “illusion” of being the entire image lit!

In other hand, for the light to travel through the acrylic, I would recommend you to do something similar to this one! 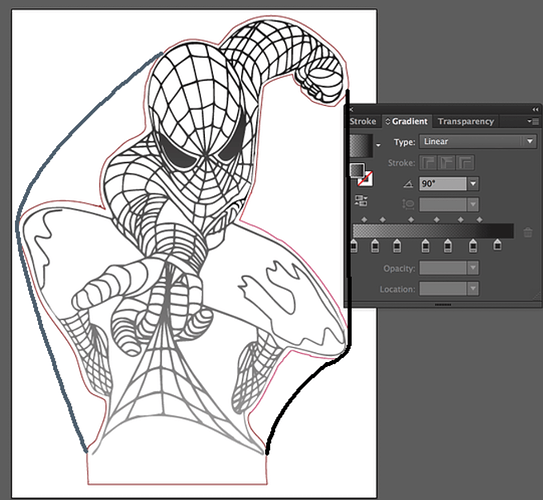