Loaded as wrong size & PDF loaded as all etch vs. including vectors to cut

So today I was cutting out some leather bracelets for demos for a meeting I have this evening.

Problem 1: I use Illustrator and save my files as PDF. When I first started using my Glowforge it suggested SVG but every time I used SVG saved from Illustrator I had problems, so I use PDF. Today the PDF (which had both vector and raster elements, which is common for me) loaded as just an etching file all on one layer instead of with my various layers.

Problem 2: To compensate for Problem 1, I saved the file as an SVG. This did load with the layers. I lined up the image on the top right of my material utilizing the camera as always. The image was completely on the material when I did this. When the image printed, and I opened the glowforge, I found that the image had been shifted to the right and the right-most edge of the image had gone off the edge of the material.

On top of this, I later realized that the file had been shrunk! It was 2 inches too short! Yes I suppose I should have caught this if I had looked at the ruler and saw that the design was two inches too short. But even if I had caught it, I would had had to drag the file to its actual size???! That would render all of the precise measurements I had taken useless because they would no longer be exact.

This day I am very disappointed in my Glowforge. These are all very basic functions that are essential for use of the machine. Today my Glowforge has let me down and I have wasted material and time because of it.

If we’re going to save the file as an SVG, we have to make sure that we have the correct settings checked (and not checked) in the SVG popup.

To avoid the problem in the future, just setup your Save conditions like the ones shown below: 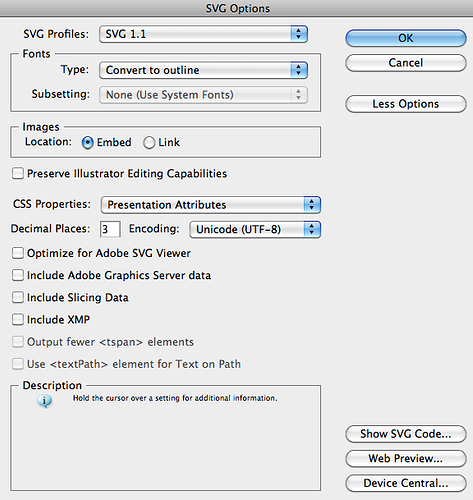 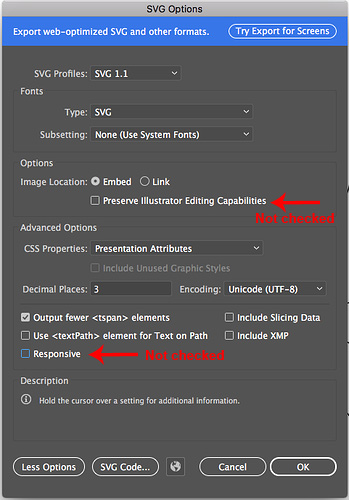 loaded as just an etching file all on one layer instead of with my various layers.

You may already know this, but just in case…

The GFUI doesn’t actually recognize the layers in your files – it has its own logic for determining how to break up the file into the steps (or “layers”) that are thumbnailed down the left side of the GFUI.

Here are the things I know of (so far) that influence how it separates things out:

I think that’s all of it – or at least all that I’ve gotten figured out, so far!

One last thing. You can also just copy and past the design into the GFUi home screen. I don’t make SVG/PDF any more from illustrator. Just copy and paste in. Saves a step and a pile of extra files.

yup. the only negative is that it pastes in as “pasted design.” but easily renamable.

Yes that is why I make the different vectors that should cut at the same time the same color. Which is why I am frustrated that in this case GFUI did not accept the files in the same way as previously.

Yeah, sometimes it just decides to do something totally unexpected… keeps us on our toes, I guess!

Sorry for the frustration. If you feel like uploading your files, there are some gurus here who might be able to figure out what’s making it do what it’s doing.

Thanks for the help in this thread, everyone.

@jessica, if possible, I’d like to take a look at the PDF you originally uploaded. If you don’t want to share that file on the forum, you can email it to us at support@glowforge.com. With that, I’ll be happy to look into what may have caused the problem with the separate print steps not being recognized, as well as the change in scale once the artwork loaded into the Glowforge app. If the scale difference only happened when you uploaded the SVG, could you please provide that file as well? Thanks.

Regarding the print shifting from its intended placement, I have a few questions that will help us investigate this for you: