Forgive the terrible photo, it’s raining and good light is hard to come by

I was wondering if the B3.0 was gonna make it just look like hole cut out of the fabric of the universe - and yes, yes it does

Wow!!! thanks for sharing.

Um… mind if I make it parametric?

that was an amazing little project. im 43 and had a blast front start to finish. gonna do some sanding and the spray it black. would love to find more like this. awesome job to the creator.

nice. i have black 2.0 I definitely have to make this.

Thanks @evansd2 for beta testing and for sharing some ideas privately! I’d like to share some insights and some of my design thinking and process for this model. I figure some of this might help someone hoping to build models like this.

Background
This model was not my first Fusion360 model, but it is among the first 10 things I’ve done in Fusion. This is the most obvious revelation, but for me seeing my idea in 3D radically changed how I think about how everything around me is constructed. CAD really opened my mind up to the vast scope of spacial design that was previously out of reach.

So now I’m going around in the world wondering how I would build everything with a laser cutter. I now see forms that I know I can build and some that I can’t, and my mind starts to search for something that only appears like it can’t be done with a laser cutter. At that time I stumbled across JackCarter’s Tanks on Instructables and it blew my mind what he was doing. He was going so far beyond what I wanted to that I actually thought that my goal wasn’t so crazy anymore, I just needed a form. I honestly don’t remember how the F117 came to me but I remember the feeling I got when I decided to build it - pure raw anticipation and excitement.

I set off on the model and it took me over 3 days - I’d guess about 8 - 10 hours spent in design. As a new Fusion user - I probably made every mistake in the book but I did a lot right too and it came together! I couldn’t really believe it when the model was done and I really didn’t believe it when the first print came out. The scale was fantastic - large but not huge, and the overall shape was really spot on. I really liked how it turned out but there were lots of problems - the fingers were hammer tight, assembling was hard without labeling because many supports were easy to confuse, the tail supports were ugly and fragile, and there were build order challenges. A second pass and some tweaks made V2 much more pleasant and the improved tail just looked a lot better to me. I added labels to help with construction and set my wife to work building it with minimal directions to see what would happen. She got it done and the feedback from that build made it into the version that I posted here. Two coats of matte black paint and her build become the model that you see in the previous pictures I’ve posted. 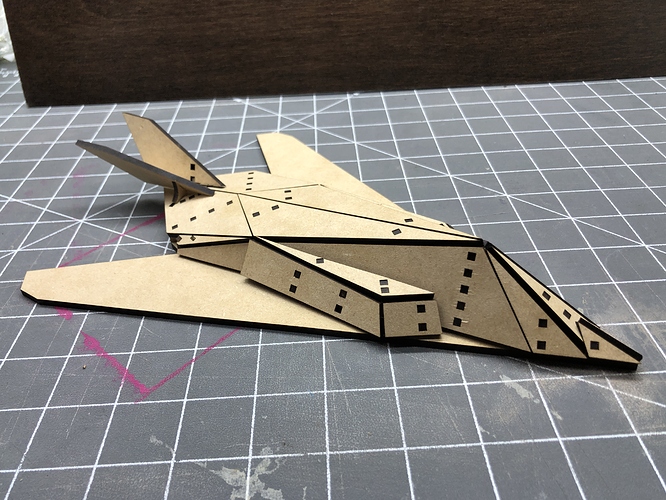 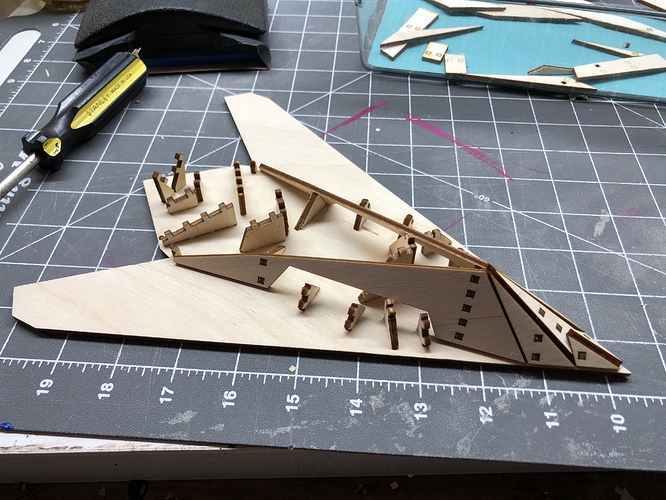 I showed the prototypes to some family and friends and got a lot of positive feedback. Most people don’t know what they’re looking at but still appreciated the craftsmanship.

Design Thinking
I set out with a design intent- this was going to be a tradeoff between a pretty desktop model and a heavy-duty tactile toy. I didn’t make up my mind then but knowing that there was a dichotomy between these two intents was helpful for making decisions as I went along. I kept coming back to this balance and in retrospect in nearly every piece I started with the strong-toy intent and made concessions towards the just-for-looks model. This ended up making for a pretty strange construction. You’ll see parts like O and F that are minimally attached with little regard for strength and parts like D that are hilariously overbuilt. I didn’t quite strike the balance that I wanted and ended up with a frankenstein. The worst one is the tail- which I opted to go for pure looks and stability be damned. Sorry :[ It all does come together nicely, and I did achieve a separate goal of being a glue-free construction. I just personally hate gluing up and I’m ok with the finger joint look so I always try to build stuff that you can assemble securely with just your hands.

The modeling process I took went something like this.

Next?
Some things I put off, maybe for a future model were landing gear and/or a stand. Also I am contemplating building another separate scoring layer for exterior details. This would make it possible for builders to choose between the labels or the details during their print. 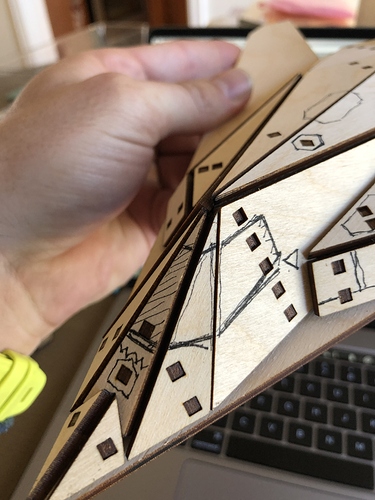 Happy to answer any questions about this build!

Man, that’s quite a writeup. As for the surface details, scan your hand drawn ones and use those. They look so cool!

Thank you for sharing the write up, photos, the file and your expertise.

Really appreciate the blow-by-blow. It’s an amazing piece of work.

This is amazing, really love it, and plan to print one. Also plan to show it to my 16 year old son in hopes to inspire him to learn how to use Fusion 360 and help with some design for me. Thank you so much for sharing.

Thank you so much for sharing this awesome design!

Definitely like the idea of scoring details before cutting. Amazing work!

There’s a Kickstarter out there for adding motors/props to just about anything and making it fly from your phone. I think we are going to do one of these out of lightweight foam once our Kick order arrives this summer.

Wow! Very amazing work! Looks like you’ve gotten a grasp on Fusion 360. Thank you so much for sharing your file and doing such a nice write-up on your process!

I cut this out with 1/8" proof grade material but the pegs won’t fit into the holes?
The thickness of the material is the size of the peg holes but none of my pegs would fit?
I just uploaded the whole template into glowforage app and cut
Did I do something wrong?

You probably did not do anything wrong. Sometimes even with

there is some variation in the thickness.

If you want to salvage what you cut you can always take a needle file to the parts.

Until recently if this happened with someone else’s file there was not much you could do with it without a major rework but now the GFUI supports scaling and you could take two parts and play with the scale until you get a fit that you like and then cut the whole thing at that scale.

Thank you for the reply and the help Brother!

Wow!! My son is going to love this! My husband is a mechanic on the b2, so all things aircraft is his obsession! Thank you so much for sharing this!