The Glowforge has surpassed my expectations on what I bought it for! Here is a handcrafted guitar with a custom, wood inlay cut on the Glowforge!! 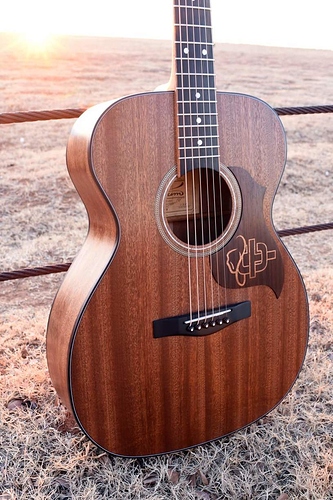 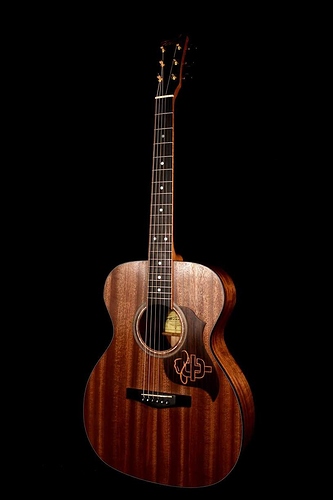 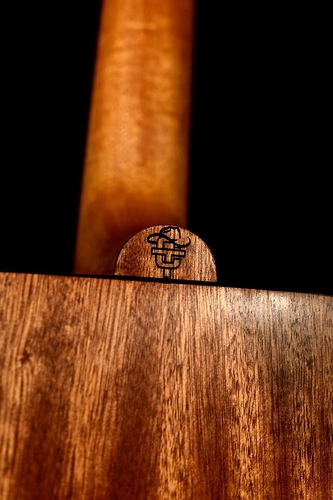 Wow! Can you explain what you did here?

Fantastic! The custom pick guard is so distinctive.

Did you laser the neck before assembly? Very nice work.

Yes I did. The small logo on the back was engraved and cut out of one small piece, then glued as an end cap. I later carved the neck and assembled.

I used Indian rosewood for the pickguard and mahagony for the logo inlay. I thinned the 8"x4" Indian rosewood down to 1/8" in my drum sander. I used Adobe illustrator to design the pickguard shape and logo design. I engraved the logo for the space the inlay would fit and then cut out the pickguard. I had scrap left over from the guitar body that was already thin enough for the inlay piece. The inlay piece was very snug but with a small rubber mallet and some gentle coaxing the inlay fit perfectly! I then flooded the inlay area with thin CA glue and let it soak in. I did this two or three times until the glue wouldn’t soak in any more. After the glue dried I ran the full pickguard through my drum sander until the desired thickness was met. I final sanded by hand to 320 and applied a thin coat of true oil for the finish. For application I used a sheet of the same 3m adhesive transfer tape that the proof grade vaneers have on them. I used the Glowforge to cut the pickguard design a hair smaller than the actual pickguard out of the adhesive tape and carefully placed it on the guitar. I hope this helps. I have plans to put a video together on the process.

pickguards are on my list, as is etching a telecaster body. this looks great and i’m looking forward to watching your video.

i think that’s where i snagged the Tele pickguard pattern (it shows as a visited link). but a good reminder for me of where because I’m sure i’ll do some for other people later. i think some of the thin, two-color acrylic i have could make for interesting pickguards.

edit: now i remember the issue with their templates. when i open up the PDF in Illustrator and release all the clipping masks, the actual outline of the pickguard is an image, not a vector.

still useful, i can redraw on top of it, but kind of a bummer it wasn’t a vector line. 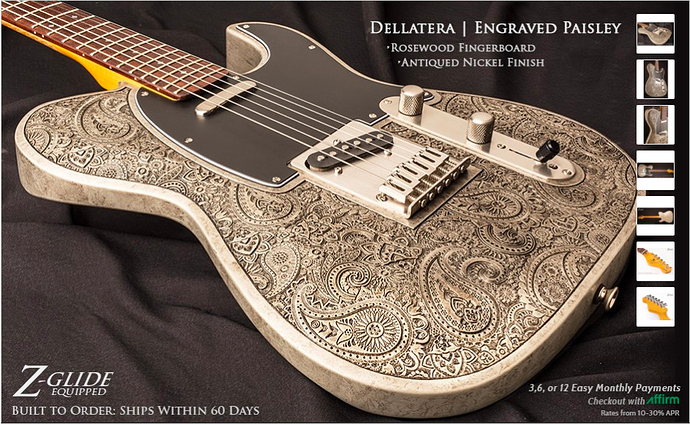 Pretty sure Dean Zelinsky is doing a lot of lasering; I know for certain his Z-glide necks are lasered. I think just about every piece on the body can be ordered with his Paisley pattern-work…

This is really beautiful. If you make the video, I’ll definitely watch it. I seem to spend a lot of time watching people make custom guitars on youtube… probably because I once tried to make a guitar in about 1987 and got almost nowhere at the time.

Thank you!! I have a youtube channel called Tatum handcrafted guitars. I haven’t had time to load much content but have big plans for the future. That is if procrastination doesn’t have bigger plans!

Great resource!!! Im actually in the process of building my own version of a Tele! Thank you!

Great detail. I’d love to see more of this, please!

I’ll try and make a complete tutorial of the process in the next few days!

Great job! Definitely right up my alley! Have you tried any custom inlays on a fret board? I have the pro version and was going to use the pass-thru slot to do some

I haven’t inlayed a fretboard yet but have plans to try in the near future. I need to figure out a way to make sure the accuracy is spot on.

Completely agree … something I’ve ran into as well. I did speak to support and they are working on improving accuracy via software updates.