So I’m kicking around some ideas and certainly not spending the time I need to on it but wondering what others think.

If I use the name “Three 33 Designs” I wanted to also have a stamp I can use that is visually distinctive while still tying into the brand. I was thinking something with just “Three 33” or even “Thr33” as the 33 plays for both the ee and 33.

That line of thinking progressed to this:

Does anybody have any thoughts? It would still need some work but is it too abstract or silly?

I think it looks cool, but to be honest I wouldn’t have read that as “Thr33” if you hadn’t told me.

That was more the seed of the idea. For a logo it doesn’t have to be literal but I like that it derived from the name. The full Three 33 Designs will likely be stamped on the inside. I just want something for the outside that can be identified.

Gotcha. I think it’s very clean looking and would look great engraved or stamped into leather.

i agree with @rhenley that i didn’t read it as you intended. and it’s not abstract enough to not be taken literally by someone who doesn’t know what it means.

the weights are very light. if you scale it down smaller, the ends of those 3s could be an issue.

I may be way off in my thinking but at least want something for a first test run this week so I can see how they are received. It is going faster than intended but I just got the GF and this is the last First Friday before Christmas so I want to get something out there. Things may change after the holidays.

I’m currently looking at fonts but the thin lines work surprisingly well. The test I did Sunday was really thin an actually stamped better than I expected.

i was trying to figure out what “t3h3r” meant.

Yeah “LV” to me would be Las Vegas not Louis Vuitton and DKNY I had no clue when I first saw it.

Edit: I was thinking of adding a couple of bullets but thought it was unnecessarily busy.

I assume you were going for symmetry with that design, but I think it would look better and read as intended if you went with THR33. For more of a “stamp” look, I’d have the letters and numbers follow the curve of the oval, like this picture I stole from a quick Google search. 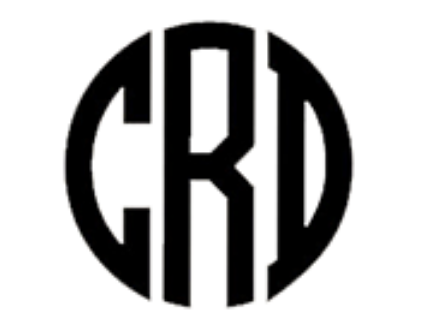 Add an oval outline around a curved version of THR33 and you have a winner in my eyes.

I assume you were going for symmetry with that design, but I think it would look better and read as intended if you went with THR33. For more of a “stamp” look, I’d have the letters and numbers follow the curve of the oval, like this picture I stole from a quick Google search.

I get where you are coming from but five letters would be a bit much for that design - too much variation between the outer and center characters. Also the R would be the dominant element.

I spent a little time with it last night and decided to go for T33D for now.

I also decided to invert the logo so I did a quick test to see if the letters would hold their shape. It worked well but I had two issues.

If I’m not careful the edges of the stamp can get embossed in the leather. Even more troublesome is how do you accurately line up the stamp?

I decided to cut a piece of acrylic the width of the flap that I could line up on two corners. 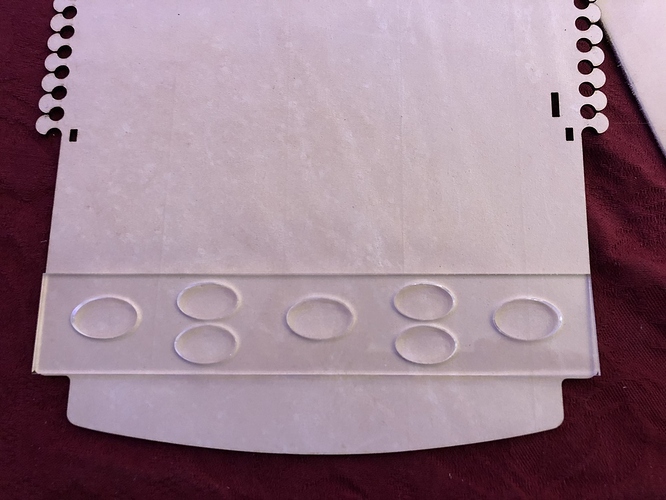 I then cut an oval out where I wanted the stamp to go. 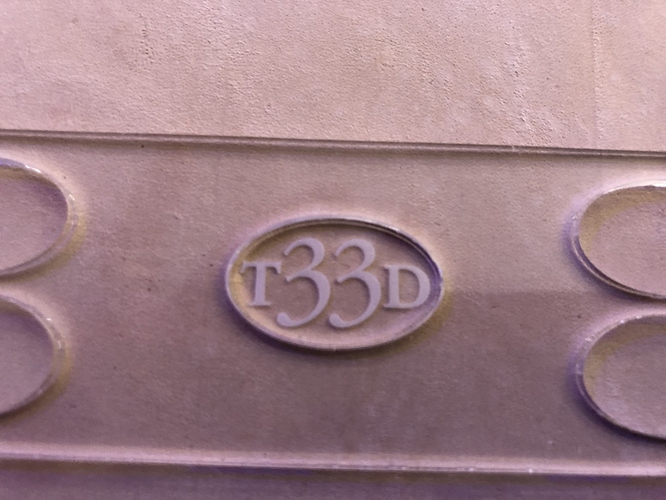 I can drop in the stamp and the. Use a slightly smaller oval on top of it to apply pressure with the clamp. 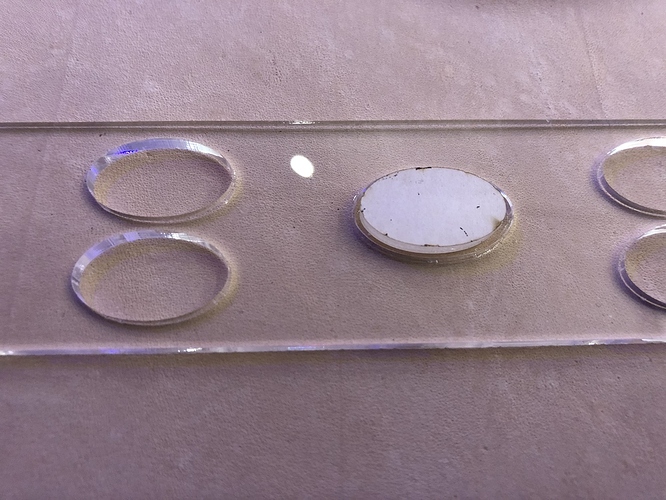 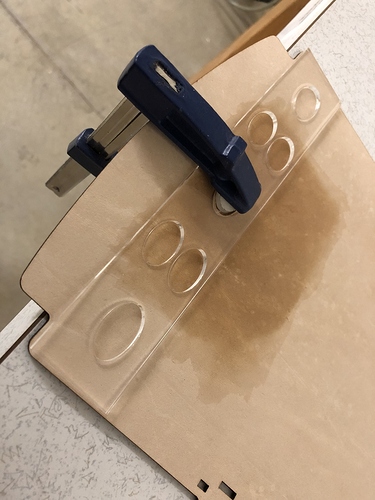 This way only the stamp is being pressed down so I don’t have to worry about the edges. I didn’t bother removing the masking from the press disk.

After embossing and staining. 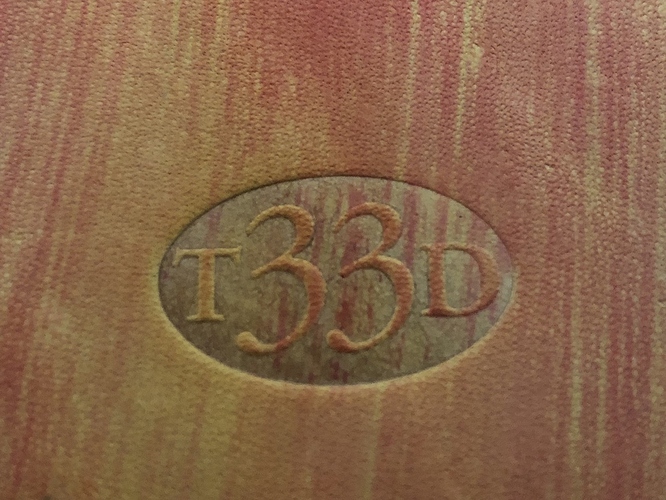 I then slid it into a finished clutch to get an idea of the final result. 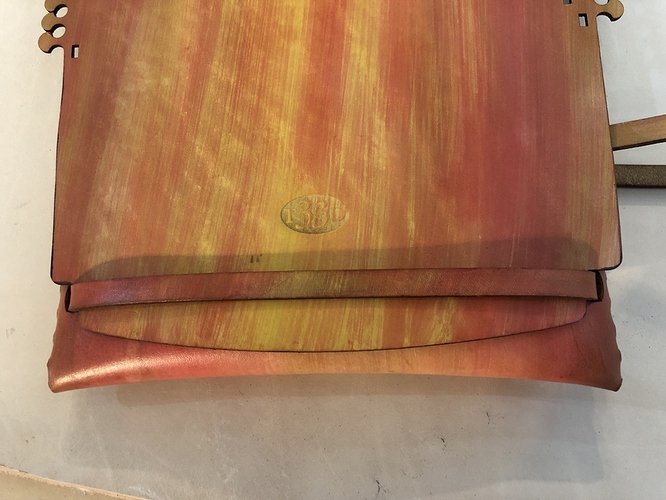 Fun stuff. Now to get better at the whole process.

Thank you. On the next one I’m going to try the emboss after the dye step. While you can see the color continue through the logo the compressed leather didn’t take up the dye the same way.

I’m not worried about wetting the leather after the dye as I won’t mind a little bleeding of the colors. It will help them blend together a little more.

It was interesting to see how different the dye on the second one came out. It has a much more pronounced grain. I still like it but I have a lot to learn.

I bought some dyes but haven’t tried them yet - might have to wait till after the holiday season because I am so behind on everything that is not Glowforge related that I need to spend some time catching up, or my family is gonna disown me.

This is what I’m using: https://www.tandyleather.com/en/product/eco-flo-leather-dye-pack

Very easy to work with and can be diluted with water. I placed my order with Tandy Leather on Sunday night then when I got the order confirmation I saw that it was coming from here in Las Vegas. I didn’t even look to see if they had a local store.

So I went down on Monday and picked up the package directly and asked them a ton of questions. The first clutch came out so well I ordered more of the leather before it went off sale and picked that up on Tuesday.

Both trips they were extremely helpful and I bought another bunch of supplies while I was in the store. If you have any leather related questions let me know and I’ll pass on what I’ve learned or ask them directly if I’m by the store.

For the most part I’ve been making it up as I go along but it has really been easy since the GF does all the hard work. My next project will likely involve some stitching. I haven’t tried that yet.