Yeah. I guess there are times it might look good but I haven’t run across any. I did a project that I thought it would look like the etch was floating but it just has that awkward distracting reflected look. Maybe if it were really thick or I could sandwich a clear layer on top but I haven’t tried inch or two thick acrylic.

Have you ever put the mirror coating on the back yourself? I was wondering how that works out. I’ve some projects where if the engrave was mirrored but the rest was colored might be cool.

It would take ages… but couldn’t you just reverse the engrave, so that it rasters everywhere except where you would have done?

Frosts and glitters do not

Stupid glitter! You were supposed to be awesome!

I want the 3D engrave mirrored. Rastering the silvering off everything but my design would only work for a flat design.

It seems like that would really depend on how smooth (and transparent) the engraving is, but it seems like you could do it using a liquid chrome.paint.

*unless I’m totally misunderstanding your intent.

I wonder if there is any spray on mirror backing… Though that is likely what @likeablejerk is talking about.

I Googled and both Krylon and Rustoleum make mirror backing paint. YouTube videos make it look like they work pretty good. Now I’m gonna give it a shot

I’ll have to run to town tomorrow night and get some.

I saw a few Youtube videos of spray on chrome. In each case it appeared to be 2 different material applications, and buffing.

This would make it something you cannot use as mirror backing. So pay attention to the steps on whatever you find, and remember you cannot access the surface you want to be reflective.

The rustoleum one I found just now is meant for second surface. So you are probably set.

Yeah I thought about the chrome sprays but that’s different than mirror. I found that same one you linked to. The difference is which paint surface is the shiny one - the exterior exposed to air or the interior surface side. The mirror spray is apparently formulated so the side adhering to the surface of the work is the shiny/mirrored surface. The effect is enhanced by the application of a second layer of matte or black on the back to make it 100% opaque and prevent light ghosting.

OK so here is what I came up with on the weekend. Only tools I used were a chop saw, table saw and palm sander. Right now the LED strip I’m using is just balled up and thrown in to demonstrate what I’m doing but I’m going to separate the individual 3 LED pieces of the strip and solder them back together so I can attach 3 LEDs to the top and sides of each acrylic sheet. 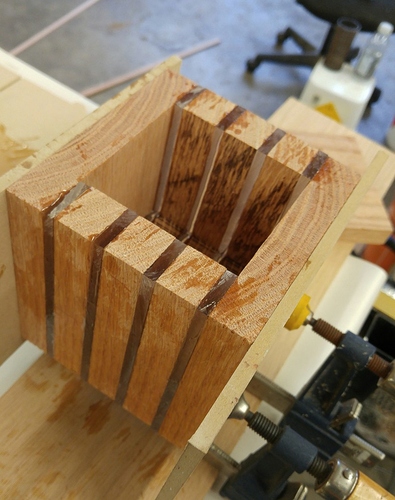 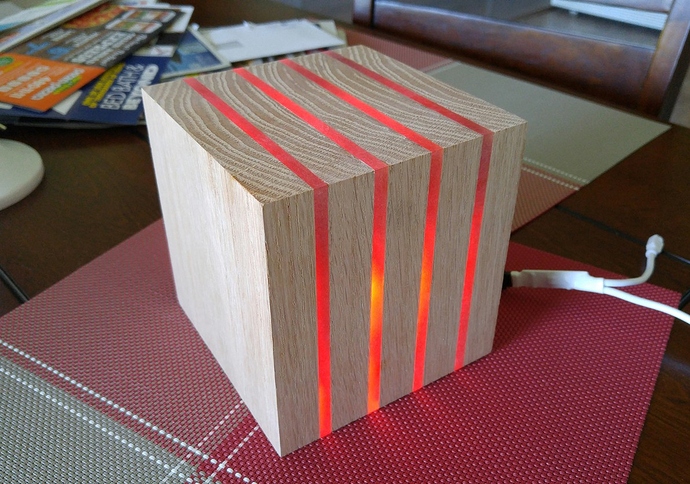 Beautiful.
GlowForge insignia on the front and back with a laser.
Thinking out loud !

I love this! I’m a ‘light freak’ so will be saving your idea for December. Thanks for sharing it.

Corners dim quite a bit. And I can tell where your ball is, so the frosting on the edges is probably not enough to hide where the LEDs are when directly attached.

You want a cube, right? No desire to round the edges out (would make the light diffusion a little easier to get evenly lit on edges then)?

Corners dim quite a bit. And I can tell where your ball is, so the frosting on the edges is probably not enough to hide where the LEDs are when directly attached.

When he splits the LEDs and attached them to the top, bottom and sides that should even out the light.

Yep, that is exactly my thoughts.

I’ll also be masking the wood (which now has a few coats of mineral oil on it) and sanding the acrylic so I can get a good frost to it.

I had a really hard time sanding the inside so I actually took one of those mini hobby sand blasters with the aerosol can attached and tried to give the inside a good roughing up. Couldn’t notice any difference though

On the flat faces of the inside, have you considered either painting them white or using a reflective or metallic tape? No sense losing light on those big wood faces that can’t be seen, and a reflective surface should help to diffuse the direction of the light source.

I’ve got some aluminum tape kicking around! maybe I’ll give that a try!

Plus you can stick it in there and see what sort of effect you get before actually adhering it to the surface. You could do the same for the white paint just using a heavy opaque white paper.

White will diffuse better than a reflective surface. A white room with a single lightbulb will be brighter than a room of mirror.

That’s true of basic white paint vs. mirrors (note I didn’t suggest putting mirrors in there), but they make reflective tapes and paints that reflect far more light evenly across their surface than their common counterparts. Likewise, you could brush the surface of aluminum tape to help diffuse the light without dramatically affecting its reflectivity.

Which is all just a good reason to try different methods and see what you like best.