Has anyone experienced an issue where Glowforge is showing that the Glowforge and accessory box have both shipped, but UPS is saying it has not received the package?

My Glowforge had an estimated delivery on the 20th. We got the shipping email from Glowforge saying it was shipped and provided the tracking number on the 16th. I was super excited it was shipping on time or perhaps even a bit early.

The smaller package’s tracking number was regularly updated and was delivered yesterday. The larger package (the Glowforge) is still showing as “Label Created”.

I’ve reached out to UPS- they are saying it never was picked up.

I’ve contacted Glowforge and they say that it shows as shipped.

Glowforge has created a ticket, but I’ve been waiting for over 24 hours for a response.

Has anyone experienced this? I’m just trying to make sure that someone is home to sign for it when it arrives, so I’m curious if it has ever happened that UPS just didn’t scan it? Or if it was never shipped and is sitting somewhere and will be coming later?

Thanks for your help!
Cassie

Didn’t have an issue with the Glowforge but have had many, many packages from other companies show up as shipped when nothing has left the warehouse or been picked up. Support looks in their system updated by a separate shipping organization in another state. Once the box has a label it is marked as shipped. Support has no other info. Technically they can track it down by calling the assembly group but I’m betting that is a different company that GF just contracts with.

When a company or person sells something, they purchase the shipping label online & it shows automatically with tracking number that it has shipped before the shippers pick it up. Once the shippers pick up the package it will show they have procession of that package. This is common practice. Hopefully this helps.

Yes this just happened to me. I got a shipped notification from Glowforge 2 days ago with a tracking number for my replacement Pro. Up until this morning all the tracking said was label created and that the package has not been received yet by UPS. This morning around 9am all of a sudden it showed “out for delivery”. So hopefully that is the same case with yours and the tracking will update soon.

Thank you! This gives me hope. No such luck on the tracking changing yet, but maybe for tomorrow? I will keep hoping.

There is a lot of weirdness in shipping these days, I have had stuff from Amazon marked as delivered when it was not delivered here. Amazon just wanted me to find it and get them to give it me. When my most recent Glowforge arrived it was my going outside and yelling kept it from being delivered across the street. This has happened frequently.

Shipping is awful right now. My trucker clients are working non-stop. My fedex driver told me that he used to have about 100 commercial delivery addresses per day and that was considered a full schedule… now he has 160. The Glowforge is a pretty big box, I would think it would be pretty hard to lose, but also pretty easy to set aside for the next truck.

I’m in unit 104 of my complex. the next complex also has a unit 104; it had a kid/teen aerobics studio that closed in early 2020. The postal carriers have decided that I shall now receive all of the cheerleading and ballerina supply catalogs. Before they closed, a misplaced google-maps pin that was directly on my shop used to mean that I would find groups of tiny little girls in tutus standing in my gallery, utterly confused. Chasing down negligent parents to inform them they had left children with a total stranger. I even laser-engraved a map that I could use to direct them to the correct location. Glad that stopped; some of the art on the walls that is not particularly child-friendly! 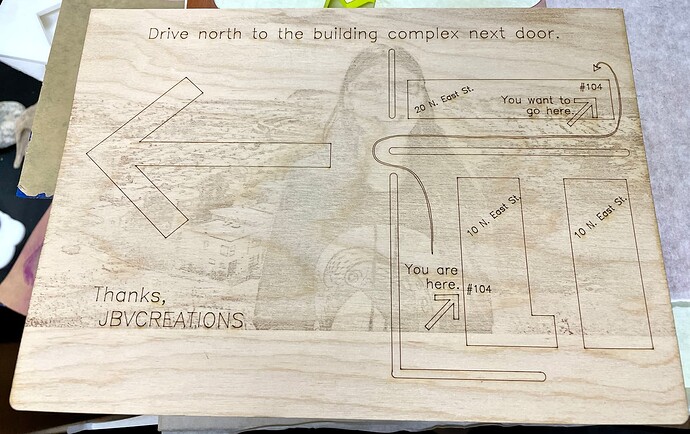 “Back in the day” (just a couple of years ago) the shipping status used to mean something. Now it’s all made up. I have screenshots of fake shipping status. Expensive stuff that had not even been handed over, yet showing “in transit”. Fake delivery reports. It’s just awful.

I have one set of screenshots showing how UPS changed their delivery tracking. Showed it in one place then was suddenly changed and no record of that can be found.

I purchase and ship enough to know it means nothing these days. The best/most accurate, which it pains me to say, is USPS.

The best/most accurate, which it pains me to say, is USPS.

The amount of internal info USPS logs on a package is crazy. I had a problem with one package… I asked about it when I went in - the online tracking had 4-5 scans. The handout that she gave to me was 3 pages of transit info that even showed them trying to deliver to the wrong address 3 separate times.

I had a rather expensive item shipped via Priority Mail (2-day delivery, although they no longer guarantee that) from AL to me in GA. I could have driven to the seller in an hour. It showed up in the main Atlanta sorting office, then vanished. A couple of days later, it was in CA. Took a week to make it back to the same Atlanta sorting office, and was delivered a couple of days after that. The entire debacle was on their web site.

That’s just one of many.

The entire debacle was on their web site.

I just had one for a package I sent to my son in SF. UPS was ground & a week. Priority mail goes by air between major transshipment points and was supposed to be 3 days.

Two weeks later it arrived back at my house. Their automatic address correction app (used by Pirateship) had changed the zip code from what I entered.

The transit logging showed it visiting nearly every post office in SF except the correct one before they sent it back.

Someone had handwritten the correct zip on the label though. Instead of trying that one they sent it back. $18 for a two week cross-country vacation.

I resent it via UPS.

What’s interesting is that when I bring a package for the same address to the post office they create a label that has the proper zip (& they add the +4).

That’s actually a cool feature they’ve offered for a couple of years. No need to make a label yourself. Create online, they email a bar-code, which when scanned at the PO, they print out one of their nice sticky labels.

Oh, how I remember the days of printing, glueing, and taping over my own labels at home!

I am no fan of USPS. I think I’ve shared my experiences being part of the independent “mail quality” team for over 5 years. Choose your poison.

That’s actually a cool feature they’ve offered for a couple of years. No need to make a label yourself. Create online, they email a bar-code, which when scanned at the PO, they print out one of their nice sticky labels.

Yep. Before I started using Pirateship I used the USPS online service. Didn’t have the Zip change issue with that either. Wondering if they’ve got a newly introduced error in their app or if they have a different app/database for commercial partners vs. USPS services.

I am no fan of USPS. I think I’ve shared my experiences being part of the independent “mail quality” team for over 5 years.

I think the drop in quality has been deliberate, first by causing a huge expense, no corporation would have and the past few years, deliberately maiming the service to be worse yet. A few years back in the grids when talking to folk in Europe they would used mail, phone, and internet interchangeably, when we would hear it as three different things. We were told that for them the government Post Office was the same source for all three so those in the boonies got the same service as in the city. Only within the past weeks has there been even a hope for good inexpensive internet beyond the city not yet implemented, and at the time this was happening it was a long distance call from one side to the other in the same city.

Managed as it was for 200 years, and adding in phone and internet as those were implemented (as they are just a technological improvement of what the mail was in 1800, and the same reason for being universal) USPS would be more financially stable(making up in internet service and email what was lost in snail mail) but the forces trying to kill the USPS would never let it expand services, and trying harder than ever to kill it now. Allowing real competition in everything, would allow the in city cream to be siphoned off, but be a blessing in the countryside that now gets abused.

I know it wasn’t meant to be funny, but your descriptions were hilarious.

That mess would make one go nuts…I’m glad it resolved itself.

Exactly… and my curiousity is piqued but steering clear of this one:

Glad that stopped; some of the art on the walls that is not particularly child-friendly!

but no client of mine has ever complained about nude imagery in the gallery.

I don’t think the front room has anything NC-17. It has plenty of PG-13, and certainly a bit of R

Thanks for all of the positive thoughts. Unfortunately, the UPS shipping is still showing that the package has never been received and Glowforge is not responding to any emails. I’ve tried their support phone number too and been on hold more times than I can count, but then it says to leave a voicemail and hangs up on me.

I’m not really sure where to go from here. I’ve been charged…Glowforge email says it is shipped. UPS is saying they have never received it.

I would contact support today via phone and see if you can get through.

I’ve tried calling 6 times so far today. Each time I am on hold until I get a recording to leave a message and then it hangs up on me.