Magic the Gathering Card for EDH!

Here’s my first post ever - and will have many more to come.

My GF Pro came in earlier this week, but have been super busy with work.
But here’s the weekend! So without further ado, I present to you my first (real) print:

A Magic the Gathering card!

There’s a format that my buddy plays - EDH - that requires a card to (almost) forever be on the playing field (we call it battlefield). And his current “commander” is the below: 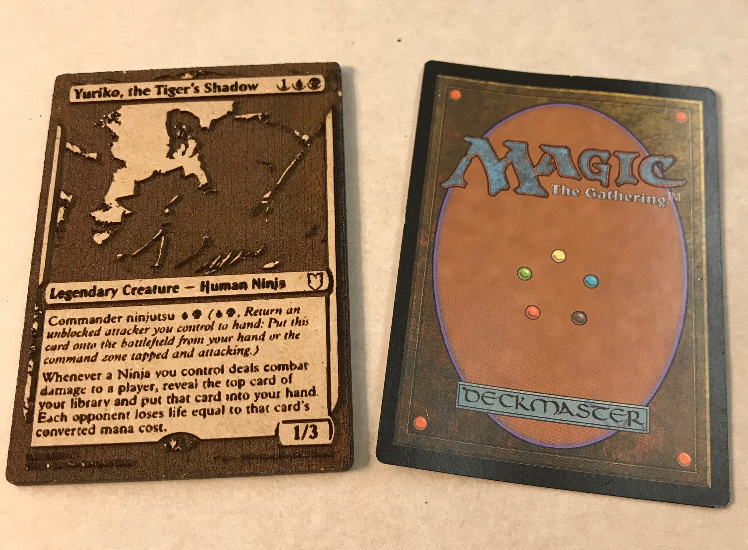 Also got the alignment okay (GF camera, you’re the best!), and was able to engrave the back without much fuss: 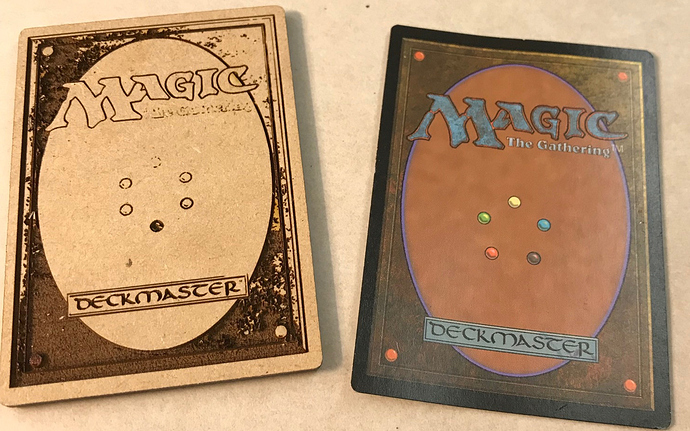 Things I learned:
1) It takes forEVER to peel off the masking. What did I expect??
2) This gets REALLY sticky. Better to not put it near your expensive cards, even if they’re sleeved.
3) Could have spent a bit more time on getting the svg to have a better contrast (“The Gathering” part on the back didn’t show up

)
3.5) Same goes for the front picture of the character. Oh well!
4) The laser cut card is smaller than the playing card by 0.5mm for height and width. This is due to kerf that I didn’t account for in my svg!

Overall, very happy with the result. And will have a surprise for my buddy tomorrow.

Welcome! Great way to jump in!

You’re having fun already! Poke around in the Glowforge Tips and Tricks section (the first post links to the individual tutorials) and you’ll find lots of suggestions for mitigating the stickiness as well as tons of other useful info.

No way! And I thought the stickiness was a must for these prints… thanks for the tip! I’ll look it up now!

I did something similar, but for a token creature, not my Commander.

Magic: the Gathering - Custom Token Made on a Glowforge

[image] One of my favorite Magic artists is Richard Kane-Ferguson. One of my favorite cards of his is Hazezon Tamar, a creature that makes “Sand Warrior” tokens. [image] One problem though is that the card is old enough that Wizards of the Coast never printed these tokens. I attended a giant tournament for the game in Las Vegas a few of years ago, Grand Prix Las Vegas, and Richard Kane-Ferguson would be there as one of the guest artists! This was my chance! I waited for him to show up (he w…

Nice! And you got an artist proof token!! Jelly!

I was super-excited to hear that Richard Kane Ferguson was going to be at GPVegas, so I splurged. I haven’t seen him at a GP since then, and I go to probably 2-3 per year if they are within a couple hours drive.