Hands down the greatest and most useful thing posted on this message board! Thank you! You have also inspired me to learn about gears so that I can learn to make something this darn cool!

I printed it all out and it looks great but I am having trouble getting it to work. I am wondering if I assembled it incorrectly. Could you give a brief description of how to put it together?

I’ve tried the inset/outset command but in my experience they end up distorting the path (simplifying it, I think?). Which is unfortunate because they’re a lot more straightforward than the Stroke to Path technique.

It does, indeed, especially sharp corners. For those, I usually directly manipulate. However a small distortion of .0025 or so in more organic shapes never seems to matter.

Thank you so much for your kind words, @daniemhermes! And you’re right, it’s a bit fiddly to assemble. Here’s a breakdown that I hope folks will be able to follow. I did this just in draftboard for the pictures, but the ones I made above are in Proofgrade plywood.

I used Krazy Glue to affix everything together. You could probably use a slower-drying glue especially for the rings and top piece, so you’ll be able to more easily line them up flush, but you will need something strong for the pointer assembly because it’s dealing with some lever-enhanced rotational force.

For starters, cut everything out. The six gears are exactly the same, so pick any five to be the “planets” to engrave on. You can also engrave on the big circle, then flip it over so that you have a logo or something on the back.

Note that the faces of the ring gear are completely covered in the final product, and the edges are burned, so if you’re doing this in two tones like my pictures it’s fine if it’s the same color as the gears, rather than whatever color you’re using for the top and back. (This is the way the file is laid out, with four gears inside the ring already.) 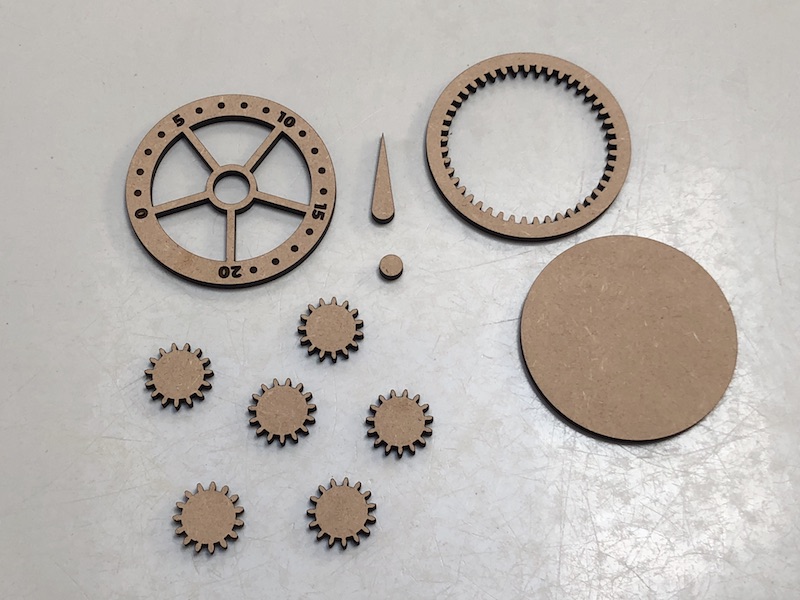 The next step is to glue the ring gear on to the backing piece, and glue the tiny circle on to the center of the middle, “sun” gear. 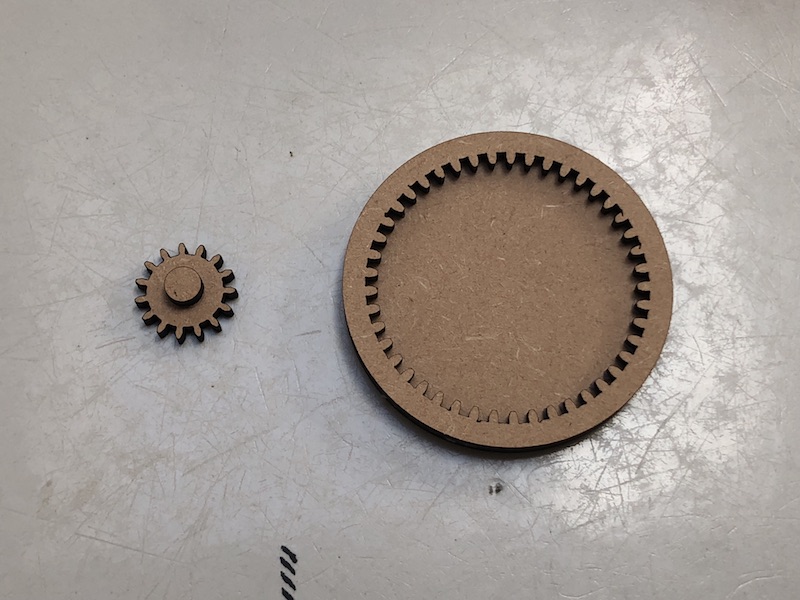 Now, fitting the gears together. The small gears each have 15 teeth, and the outer ring has 45 (this is the 2 * P + S calculation from the planetary gears formula). That means that everything nicely divides by five (the number of planets) so as you spin it the planets will rotate in sync with one another and line up every so often.

I’m just realizing now that, since the ring faces will be hidden, you can actually use a marker and draw right on top of it, which should make the assembly much easier. Just mark every 9th gap. I put mine together by eyeballing it which, as you can see from my markers, takes a bit of trial and error. (Don’t draw on the center gear, which will be visible, but it’s pretty easy to just see “every third tooth.”)

If you’ve engraved the back and want the design to line up with the front when you flip it over, make sure that your ring marks line up at this point. 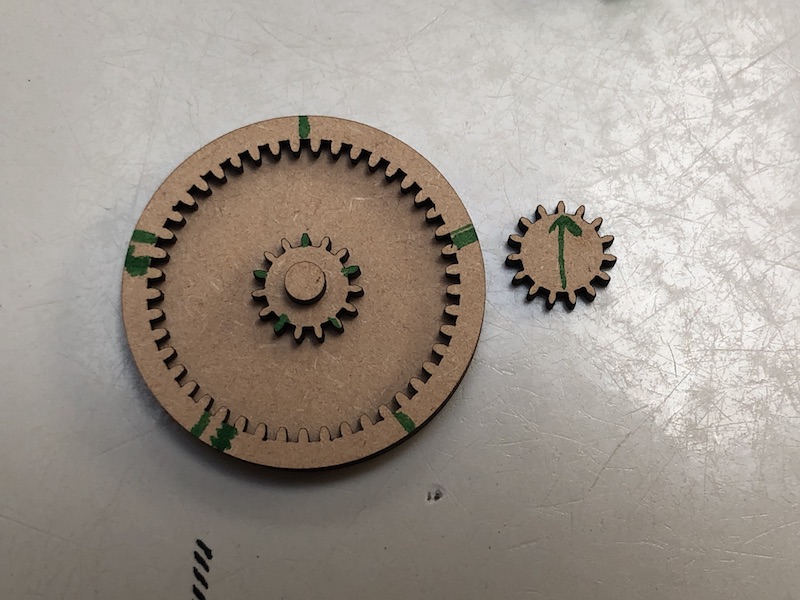 Next, start putting the planets in, taking care to make sure the engravings are the right way up. Keep imagining the arrows going from the sun to the ring. 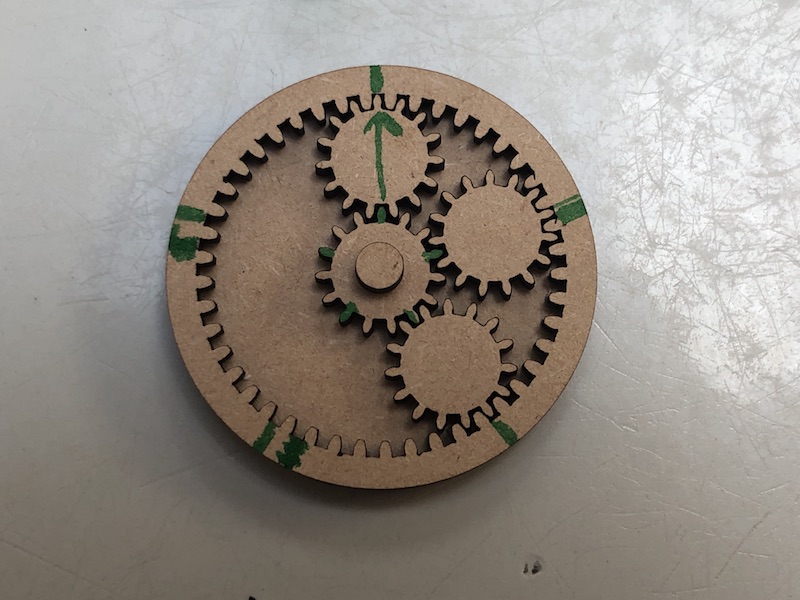 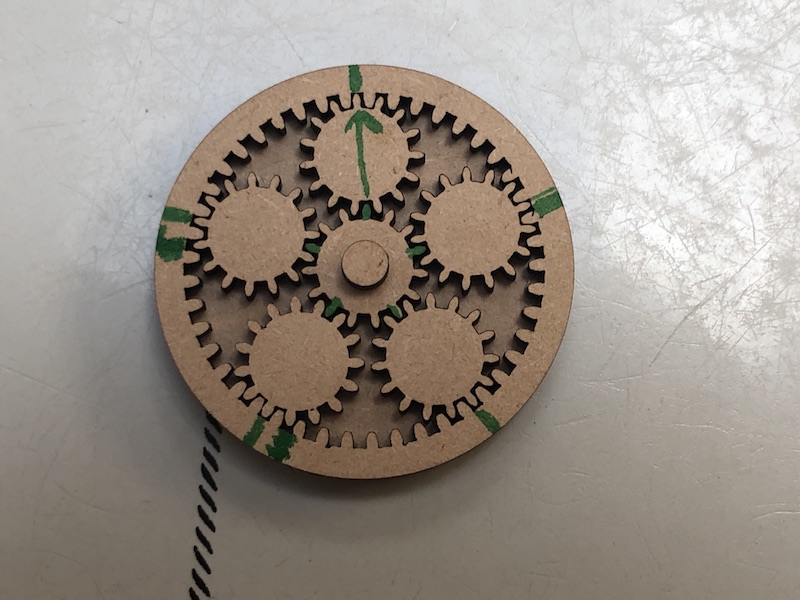 Now, gently turn the center gear back and forth, starting small, until it starts rotating smoothly. Check and make sure that it rotates all the way around, and then spin it until the planet engravings are back at their starting locations. 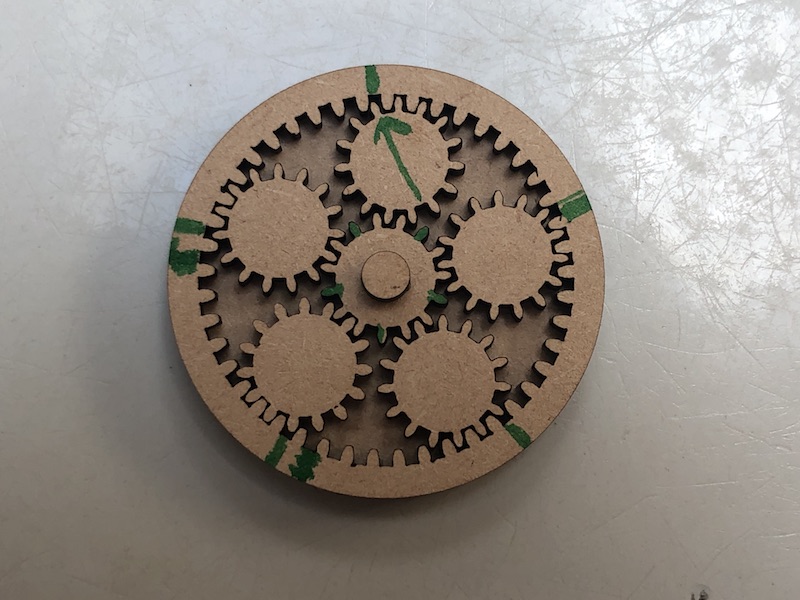 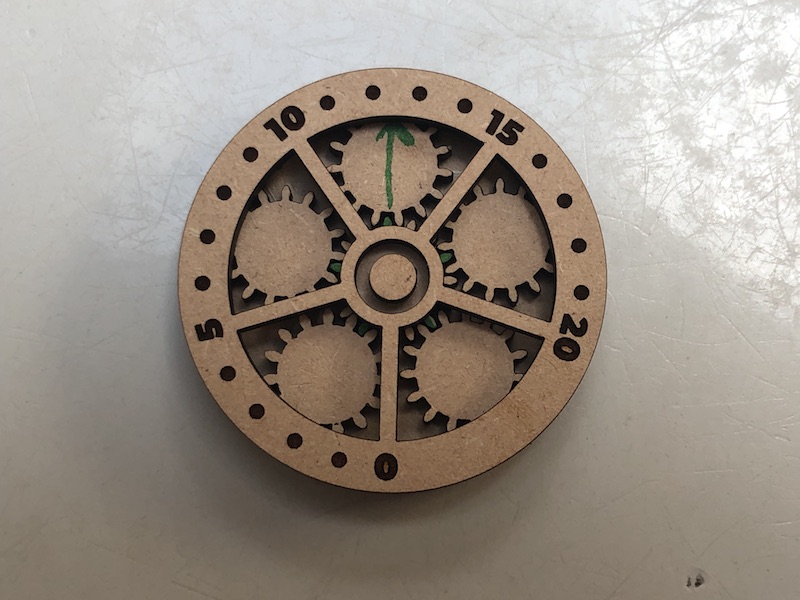 After that, just glue the pointer to its starting location. 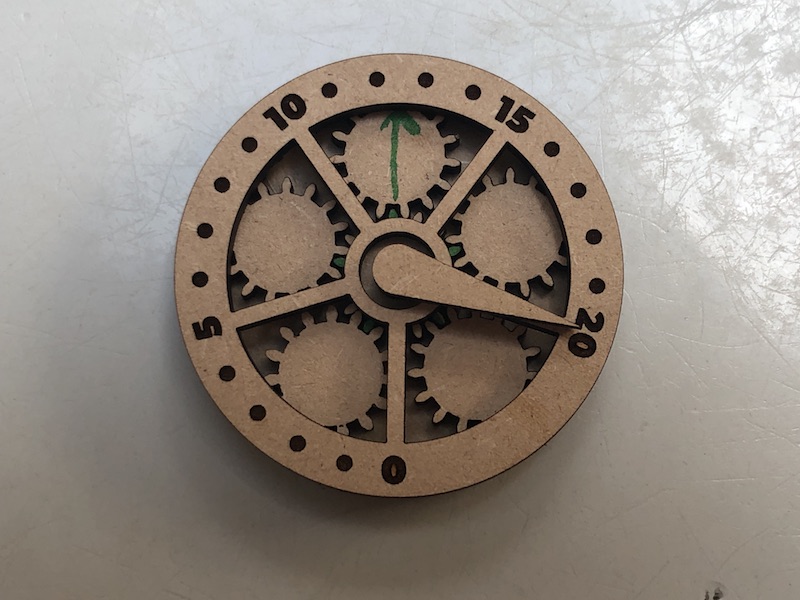 Once everything dries, it should spin around! It will likely be stiff at first but then loosen up.

Enjoy! And let me know if any of the above steps aren’t clear and I’ll provide more description.

just another suggestion based on things Ive made where I glue them together; I would add a scored circle to the center gear to help align that perfectly with the riser. I noticed it was slightly off center in your video so that might help

Thanks so much for taking the time to walk us through this process.

Thank you this is so helpful!!!

@finh You’re awesome and a great addition to the forum.

made one of these and brought it to work. My MTG friends FREAKED. OUT. haha! such a cool gadget, great job!

This is gorgeous. Thanks for sharing your design.

Just to share, I made two versions of your design, using acrylic and wood. 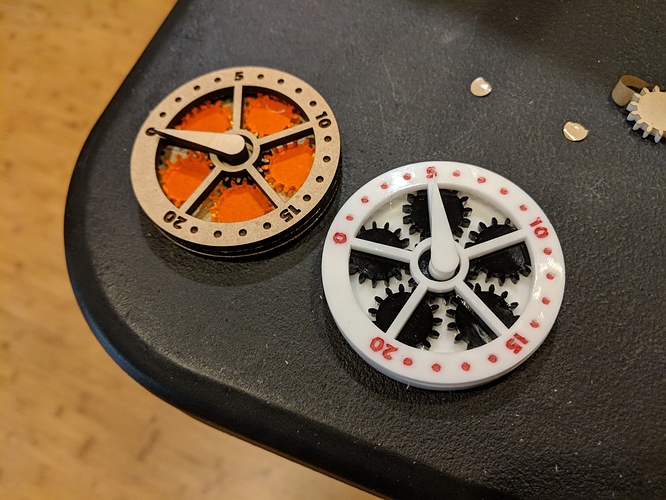 Also, what technique did you use for the red numbers?

Thanks for sharing pics! It’s been so great to see people excited about this design.

The acrylic works really nicely. The rotation is a bit smoother than the wood, since the wood edges get a little gummy.

The red is just sharpie. Heh.

I just tried filling in the etch with acrylic paint, and that worked pretty well, too. I’ll clean it up a little more once the paint has dried. 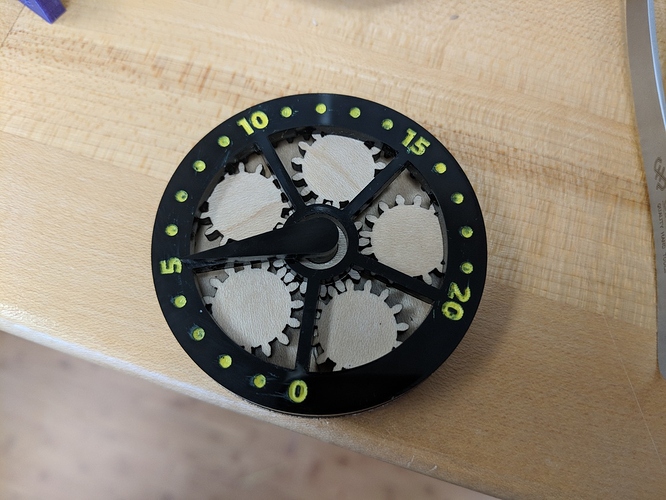 This is awesome! Thank you for the files too!

Brilliant! Couldn’t help myself and made one—with a small improvement, adding an “axle” made from a round tapered wooden toothpick. I added toothpick sized press-fit holes that went all the way through the “crank” and through the back piece, with the toothpick tapered slightly to allow free movement of the center gear in the back piece hole. Made from Glowforge medium draftboard and Gorilla wood glue.

…and here are two assembly photos plus the final product: 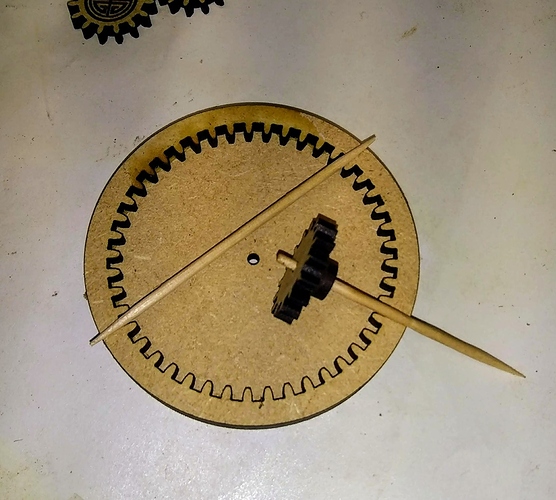 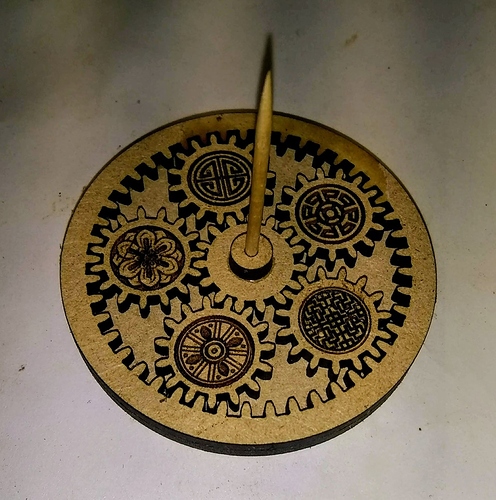 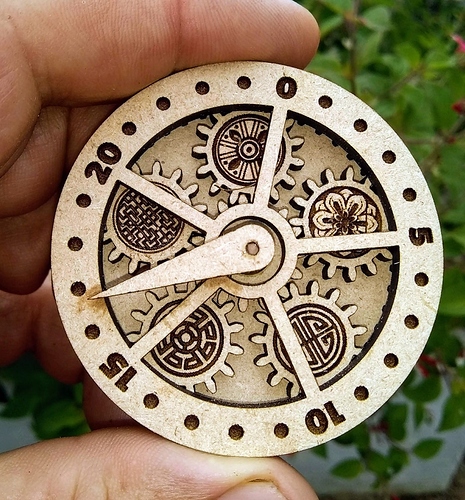 Looks great! The icons you chose are very nice.

Do you use wax or anything on the toothpick to keep it turning smoothly or is the tapering enough?

I haven’t done any axles yet in my designs so I’m curious about people’s techniques.

I tapered the wooden toothpick with fine sand paper until the center gear spun freely in the back piece. Wax is an interesting thought. I’m amazed how perfectly the Glowforge laser cuts tiny holes!