Hi all. There have even plenty of posts about using magnets to hold stuff down (and the alternatives to using magnets at all). I’m going to use the “just enough for the job” approach, and so haven’t yet needed to use the super powerful neo-mags yet.

I was wondering though, for any of you who have logged more cutting time (ie, most of you), has anyone noticed the really strong magnets actually impacting the cut? Like pulling at the head or anything like that? I’m super paranoid that these tiny blackholes will somehow yank at the Forge guts, or even just warp the cut itself if it gets too close.

Anyone want to set my mind at ease?

I stopped worrying and just printed these honeycomb pins with my scraps. They work perfectly.

Magnets work pretty well in a lot of cases, but you do have to be careful that they don’t hit the air assist or gantry.

Most people (me too) wrap the magnets in duct tape to make a small tab to grab them by. You have to mind where those tabs are so they also don’t hit any moving parts or accidentally get lased. It’s surprisingly easy to accidentally leave the tab facing the wrong way and block the laser, I’ve learned that lesson 5 or 6 Times now.

That being said magnets are simple and easy, kind of hard to imagine any system that’s easier to use.

For severely warped pieces, people rave about the tabs, I haven’t had to use them yet, myself.

I stopped worrying and just printed these honeycomb pins with my scraps.

That is one of my next cuts. Thanks!!

wrap the magnets in duct tape

Yup! I did a few that way already, but haven’t yet needed to use them. Good tip!

So you’re not seeing any “pulling” of the magnet on the head as it’s cutting nearby? That’s my current worry.

Nope but there have been posts where people theorize it as a possibility. My take on it has been that I feel it’s more likely that the air assist shroud is hitting the magnets, but it’s just a gut feeling based a bit on unquantified experience re:how magnets work.

99% of the time magnets are great, but occasionally they get pulled up off the material by the magnets holding the laser head to the gantry, so they get dragged around by the head. I love the pins; they hold down stronger than magnets, and are smaller so are less likely to interfere with cuts/engraves. The only time i still use magnets is when material needs to be held down in the middle (since the pins only work on edges) or for very thin material (paper) where magnets work better.

I suppose the possibility of magnets jumping up is a function of material thickness,(as in distance from the honeycomb) and magnet strength. If your magnet is far from the comb it’ll be closer to and this have more pull to the head. It’ll jump if pull to gantry > pull to comb plus weight of magnets.

I don’t know how the strength of magnetic pull is related to distance mathematically but my gut says it’s possibly by the cube of distance, maybe the square. 1/8” material works well. Much more than that? I’d be looking at pins or some sort of offset bracket with magnets.

Most people (me too) wrap the magnets in duct tape to make a small tab to grab them by. You have to mind where those tabs are so they also don’t hit any moving parts or accidentally get lased.

I don’t because of that issue. A friend always wraps them and they end up looking like Hershey Kisses (vs flat with flaps) with bits that have gotten trapped in his gantry.

If I use them on the body of the material then when I slide them off, I tilt them toward the bed as I hit the material edge. That provides enough grip surface to pick them off with my fingers. If it’s thin stuff where I don’t get tilting as it goes off the edge I use my little stainless hook (@jules) to pull it up from under a honeycomb hole at the magnet’s edge.

I double stack my magnets and set my tabs to they lay flat. I’ve never gotten caught by the gantry but if I’m moving too quickly and being too cheap on materials I’ve had the laser hit my magnet. 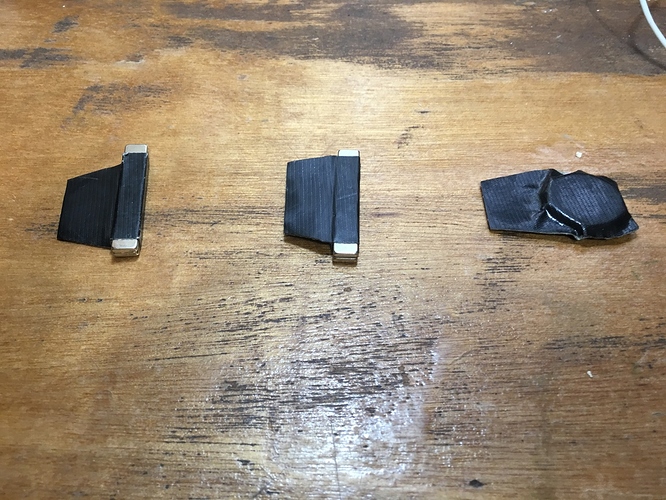 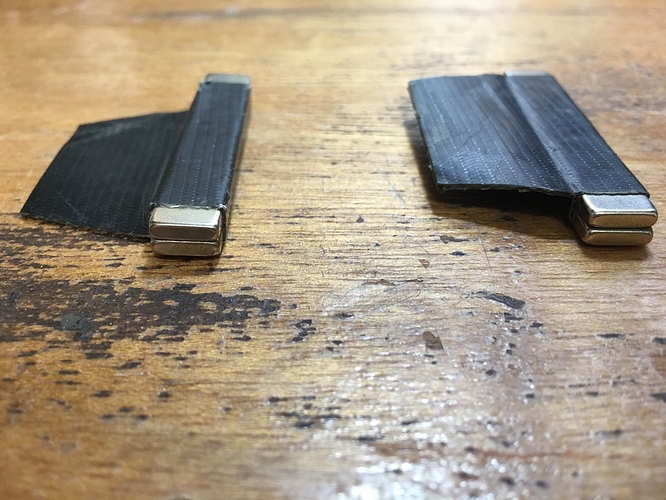 I think inverse square looks closer, but there’s some trig thrown in because hey why not, lets make a system that is really hard to wrap human heads around

The formulae here are sorta painful to visualize. 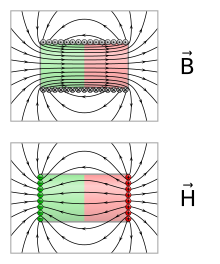 The mechanical force between two nearby magnetized surfaces can be calculated with the following equation. The equation is valid only for cases in which the effect of fringing is negligible and the volume of the air gap is much smaller than that of the magnetized material, the force for each magnetized surface is:

Edit: why are the bards ICP rolling around in my head now? Miracles, man.

No wonder I failed A-level physics !
I would have thought the force at any point would have been proportional to the surface area of a sphere with its centre at the origin of the field.
Double the radius of the sphere, and you quadruple the surface area of the sphere. Same force, but now spread over a surface bigger by a figure proportional to the square of the radius.
But like I said, I failed Physics.

As you point out the physics of dipole interactions quickly involves trig and hard to visualize. But monopole fields drop off as inverse square, but there are no magnetic monopoles, at best dipoles, and the charges tend to cancel out, so the field drops off as inverse cube. If you look at the bottom of that Wikipedia page you’ll see the force dropping off as inverse fourth.

But of course the magnets are very close and the radius is larger than the thickness and the calculations can get weirder either way.

As I don’t want my headache to get worse, I’ll just throw in that the wiki only mentions the forces between magnets, rather than between a magnet and a magnetisable material(if that’s the right description of the crumb tray - there, I knew my head would get worse !)
I retire.

It might also be worth mentioning that the tape on your magnets also serves to protect them and you. Neodymium magnets are prone to shattering, a bunch of magnetic bits in your GF doesn’t seem good. The tape holds them together if they break (which mine have) when they snap together unexpectedly.

The tape also seems to add a little cushion in case you get pinched, though I haven’t tested this yet and hope I never do.

To the best of my knowledge no one has ever demonstrated an issue with hold-down magnets causing problems for our machines. There has been conjecture every time someone has a bad cut with a magnet in the picture, but no proof.

If anyone can reproduce an issue we’d all love to see it, and then we can figure out how much magnet is too much magnet.

I made these nifty (IMO) acrylic holders for magnets, which protect the magnets from getting shattered - they are very strong, and smack together quite forcefully, and aren’t that physically strong. Those magnets haven’t ‘jumped’ to the head yet. The little magnet in the front (with the ‘handle’ sticking up) has ‘jumped’ to the head a few times. No damage, as the magnet on the head isn’t in front of the laser, but it is pretty disconcerting to see a magnet getting carried around by the laser head as it cuts. So for cutting paper I use the wider magnets in cases, and no problems so far. 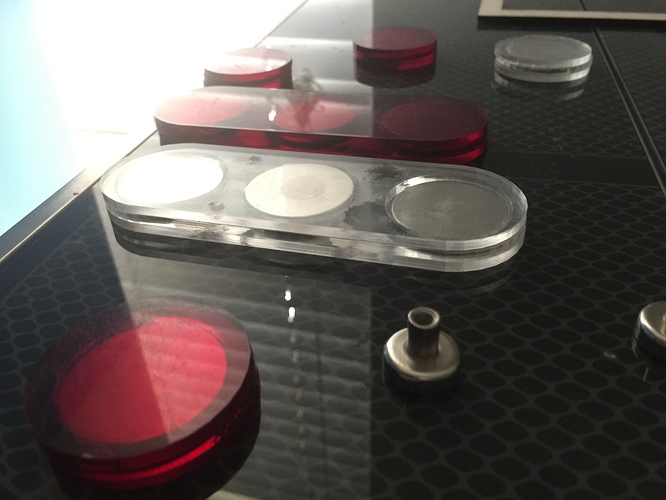 They are, indeed, quite nifty.