I just use packaging tape to hold very warped stuff down. Because it was sitting by my glowforge when I first needed something. It’s probably terribly toxic or something, but it has the added benefit of not getting in the way of the laser. I’ve etched over it and cut over it accidentally with no problem.

But if I’m cutting anything thin that might blow around, I just use a diy sticky mat (made with a 12 x 12 square of baltic birch plywood, acrylic paint for prettiness, and tack-it over & over). I recommend the baltic birch, I do not recommend the paint (some things end up with a teal tinge on the back of it), and I recommend tack-it over & over, which is a (terribly named) repositionable, temporary adhesive. It’s a but too adhesivey at first, so I stick it to my shirt a couple of times. I’ve made one and used it a bunch of times so far (for paper, wood veneer, and even hardwood when I wanted to keep the tiny cut outs).

But all that is primarily born out of laziness. Because I already had all of that stuff. And I didn’t have magnets.

Neat, though anything between your magnet and the tray will reduce your effective pull. If we’re right above about the inverse square law applying here, if that’s 1/8" acrylic and you’re using 1/8" material, you’re only seeing about 25% the pulling power you would see otherwise. If it’s 1/16" acrylic, then you’ll see… uh… 44% or so.

The ideal magnet holder would let the magnet sit off the material as close to the surface as possible, and have like a lip or something to grab and pull down on your material. I haven’t worked out how the lever arm of the magnet itself would decrease the pull on the material, but my gut says that (again thanks inverse square) that you’ll be able to design a clampy (yes that is now a word) holder that will actually increase the pull power by a good bit.

Anyone want to check my back of napkin math here? Let’s say you manage to get your magnet to be 1/32" off the crumb tray, it should represent a 16x increase in pull force as opposed to it sitting on top of 1/8" material. Assume your clamp is laterally symmetrical, that should mean that your lever arm has the load centered on the lever, so we should be able to say half of the force would be supported on each end, yielding an idealized end result of 8x the force being lost by being applied directly to the tray, and the other 8x pulling down on your material?

Been a long time since statics, but this feels right. I need to test this out, it’s been in the back of my head for ages.

Tack Mats are great and little chunks of paper etc are not all over the place. They scrape off fine when done and new sticky applied for nest job…
What got me to respond though, is Glitter Paper. If used, be prepared to toss the tack mat or save it just for the glitter jobs since it is not removable.

This stuff is another Tribbles issue. Glitter all through the forge. Glitter all over the work bench. Glitter under finger nails. Glitter tracked into the house. Glitter on the glitter.

Takes a week or so to sort of absorb into the environment. Other than being a total PITA, it can be seen as funny I reckon…

Magnets though? No issues that I have seen. Just verify they are not too high and not in the cutting zone.

edit: Best ones I have… 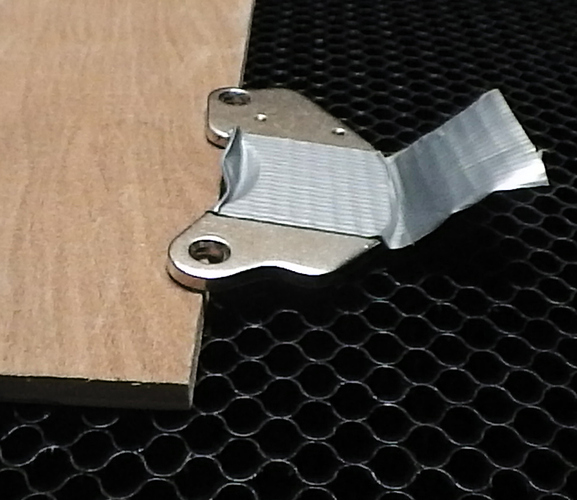 I have never wrapped my magnets either, and have never had an issue removing them. I simply take a magnet in my hand and hold it over each magnet on the bed and it joins the stack in my hand.

I stack the magnets as much as 2 high and have never had an issue with them interfering with the laser activity.

I would have thought the force at any point would have been proportional to the surface area of a sphere with its centre at the origin of the field.

Double the radius of the sphere, and you quadruple the surface area of the sphere. Same force, but now spread over a surface bigger by a figure proportional to the square of the radius.

This would be the case if you had a magnetic monopole.† But in a dipole magnet you must sum the contributions of the two poles, which largely cancel each other out when viewed from a distance. So the field falls off faster than you’d expect.

† If you do have a magnetic monopole please forward it to the Nobel Prize committee for examination.

Yes, the little magnet with the handle has no material on the ‘face’ of the magnet, so it’s much stronger when on the crumb tray.

Yes, adding 1/8" acrylic would double the distance to the crumb tray, reducing the ‘pull’ to 1/4th as much. But the case makes the magnet much easier to handle, and less likely to break - these magnets are quite fragile. So I can live with less pull.

Eee, when I were a lad there were monopoles all over the place, you couldn’t move for ‘em !
Never met a dipole except in a bar -they were aw’ reet. Kept 'emselves to 'emselves, if yer no what I meen…

To the best of my knowledge no one has ever demonstrated an issue with hold-down magnets causing problems for our machines.

I think there was one early PRU user who reported a magnet that jumped to the head but I don’t recall who it was and don’t think I’ve ever seen it reported since (except for @laird above).

Yeah, I believe that was @karaelena .