Special thanks to @rebecca for helping manning (woman’ning?) our booth.

Got an email from @bailey asking if we wanted go to MF:BA a couple months back. We gladly excepted. Thou we’ve been to many Makerfaire’s- This will be our first one running a booth.

There were a couple things going on just before out trip to San Mateo. One of which is a Tech. Faire happening at my wife work. Every year she makes something to share with her co-workers. Since this year we had a PRU Glowforge she made this. 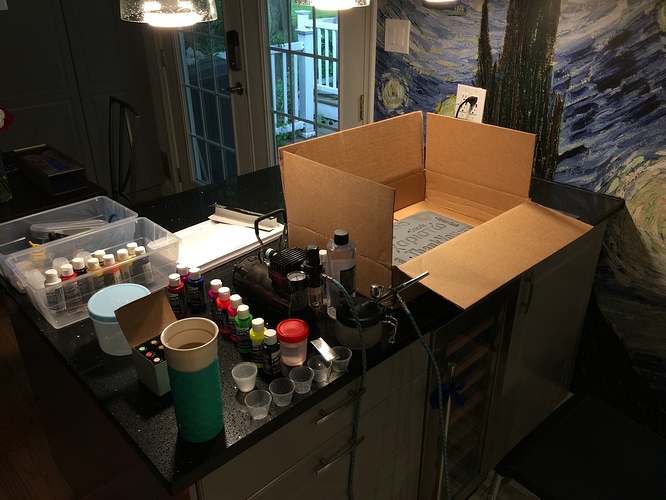 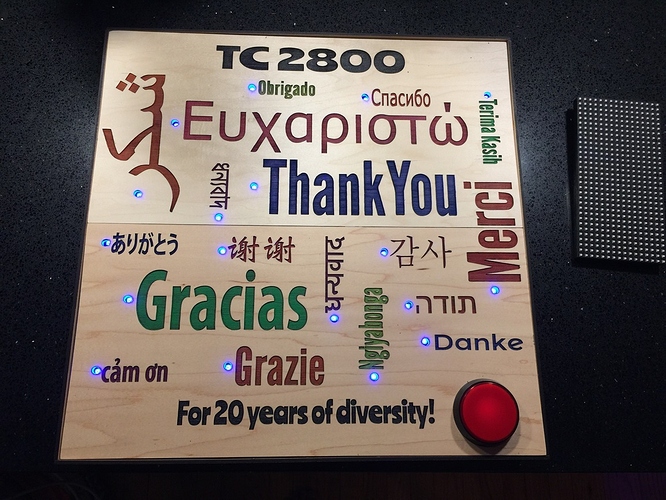 (Sorry the TV was on in the background)

A simple game that has all languages (will the most popular ones) at her place of work. It simply picks a random one when you press the button and you guess what language it is.

The other project I was working on for the fair was a dual 32x32 RGB matrix powered by a RPi with the frame made on a Glowforge. 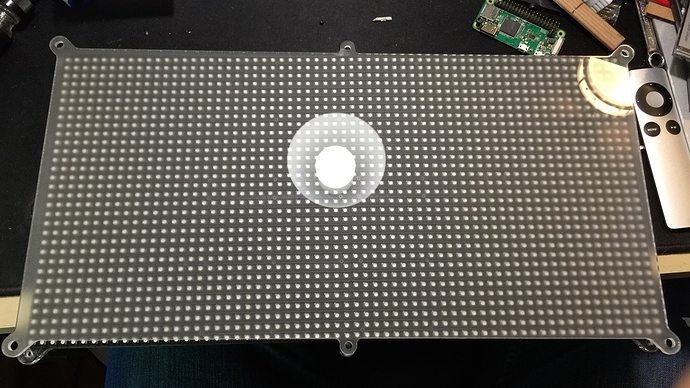 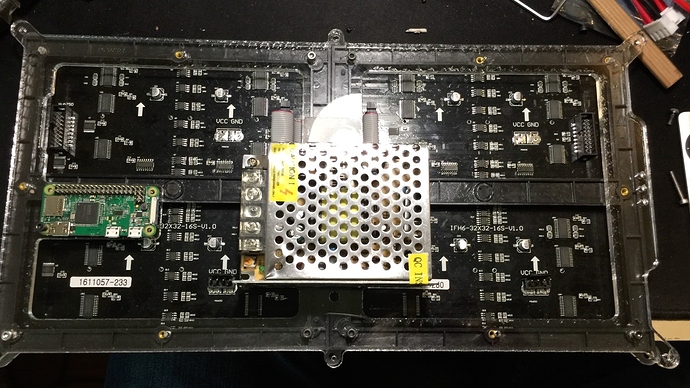 But for some reason, it had stage fright and decided not to work. Which most likely confused the folks that came to our booth. But here is a video of one of the things it was supposed to do.


(Sorry again for the TV running in the background)

And at the last second, we decided to make these. 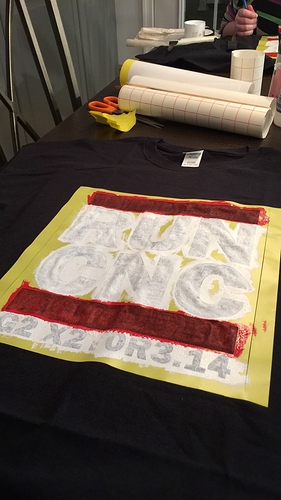 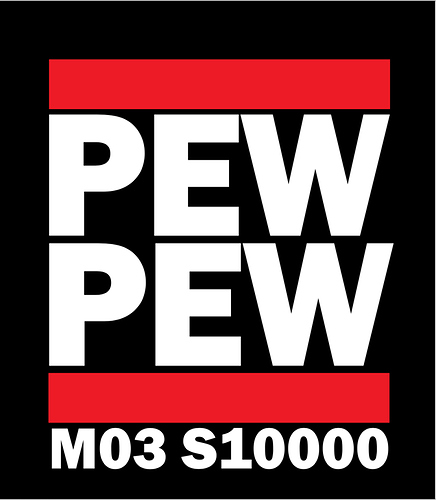 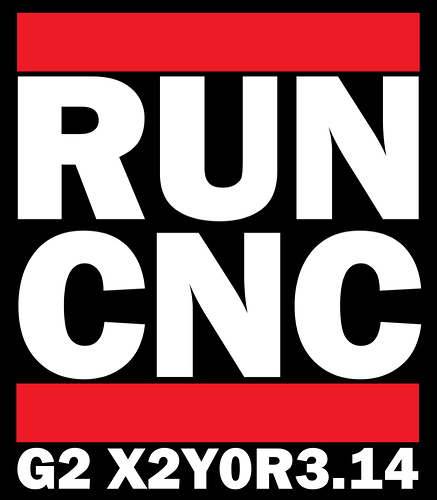 Then we flew out for makerfaire. We arrived Wednesday afternoon and set up early Thursday morning.

There are many like it, but this one is ours. 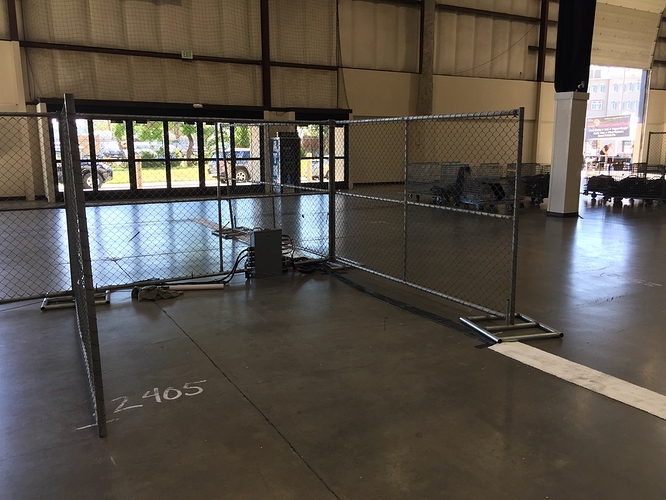 I ran into @bailey, @dannyc & @ricky later that afternoon. I helped them moved our SPU (Shipping Production Unit) and the Purex filter to our booth and I had it configured and cutting a test cut in about 10 mins or so. Continued setting up the booth.

Then I slap these on to match the PRU back at home. 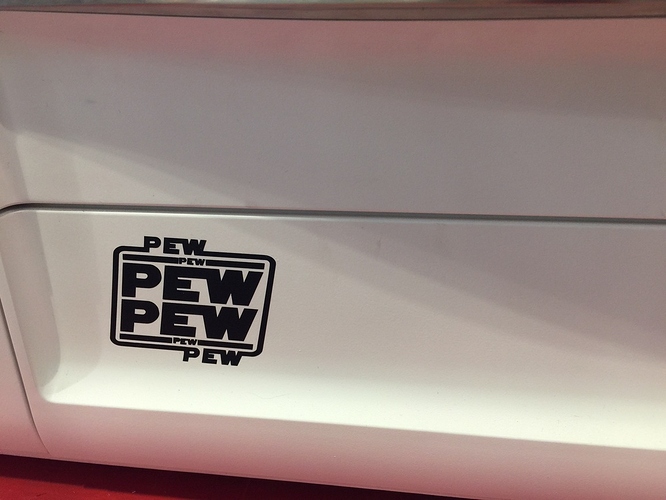 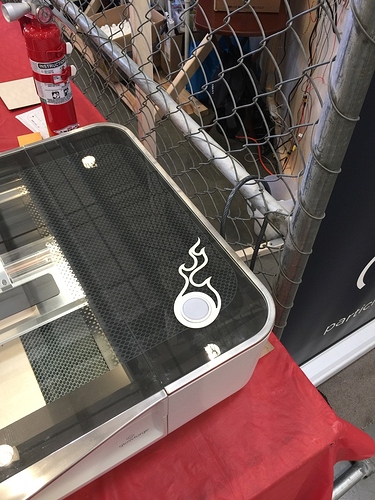 Around this time Caleb came by and asked a couple questions about the Glowforge and what we were doing.

Then we continued setting up the booth. 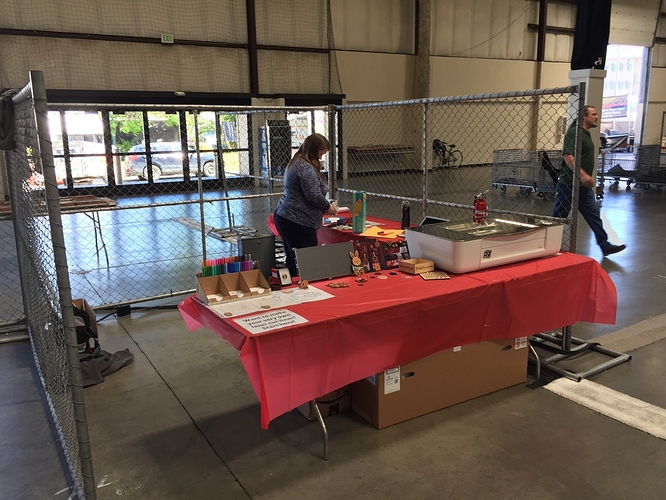 One for the cool things of having a laser cutter is you can make parts for something on the spot.
i.e. brackets to hold up our banner. A couple mins in F360 I was able to whip these up. 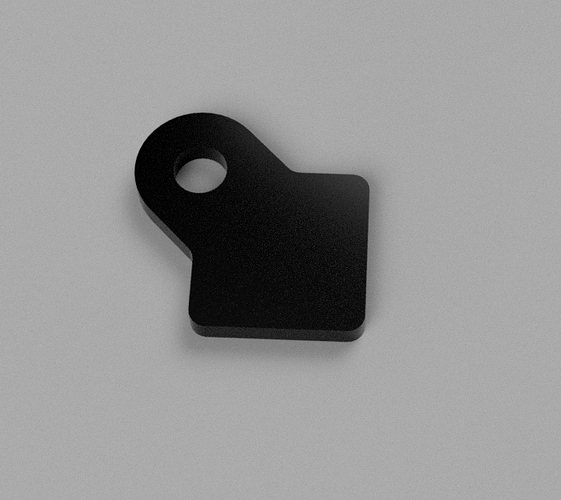 And a couple mins later I was able to cut theses out. 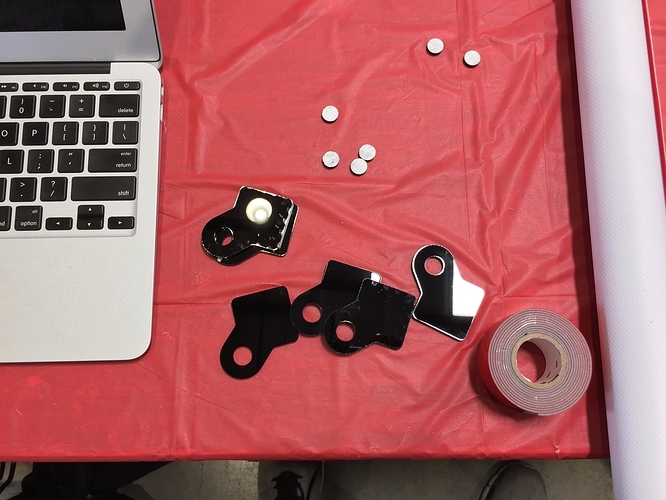 The idea for the booth was to showcase all the things my wife has made since owning a PRU. 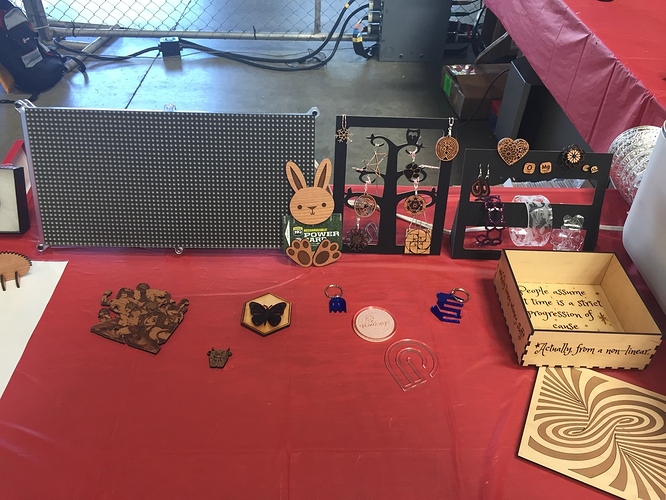 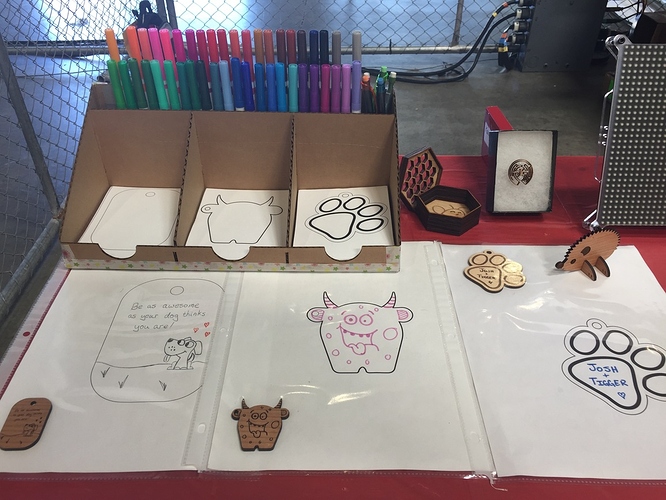 And also to have a fun interactive thing that the kids could do. 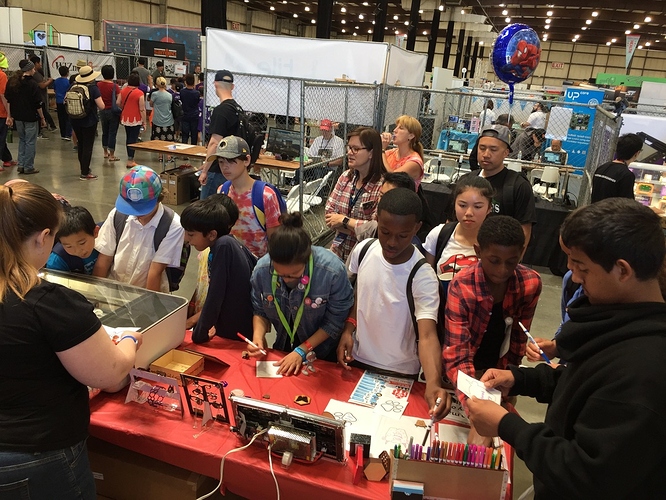 While the show was going on I had a small easter egg going. If anyone from the forums came to the booth and ID themselves being on the forums without me asking they got one of these. 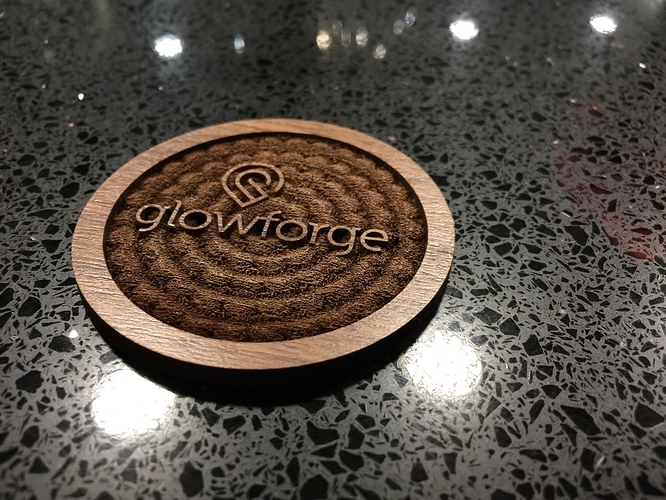 If they said they were a forum regular they got one of these. 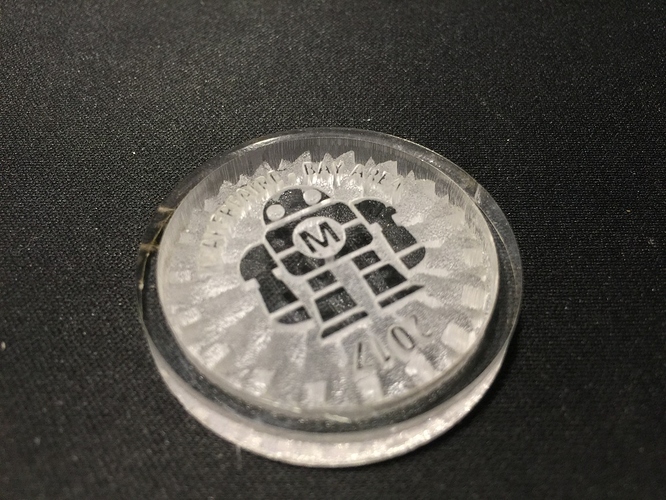 (Heres another image for clarity) 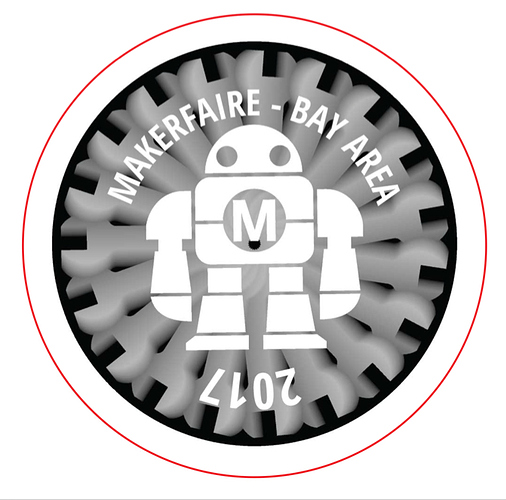 Overall it was pretty fun. On the first (or second? honestly the whole event was a blur) @dan came by and showed me his phone with a thread saying they’ve started shipping! That was pretty damn cool. It’s pretty rare to interact with a founder/CEO like that and see his genuine excitement about that.

The following day he brought by Bob from @iliketomakestuff (One of my favorite youtube channels) and we chatted for a bit.

Later in the day a guy from https://www.acemonstertoys.org/box-bots/ came by our booth and asked if we could help him out. They brought in an 80W laser so they can cut out cardboard parts for robots but it died. They need some ‘wheels’ to get cut out. They gave me 3~4 sheets of cardboard and I got to work. 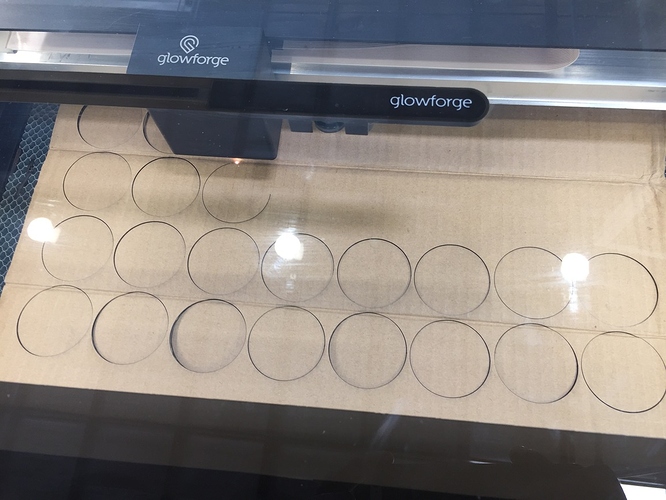 One of the highlights for me was Ben Heck stopping by our booth. Love that show. 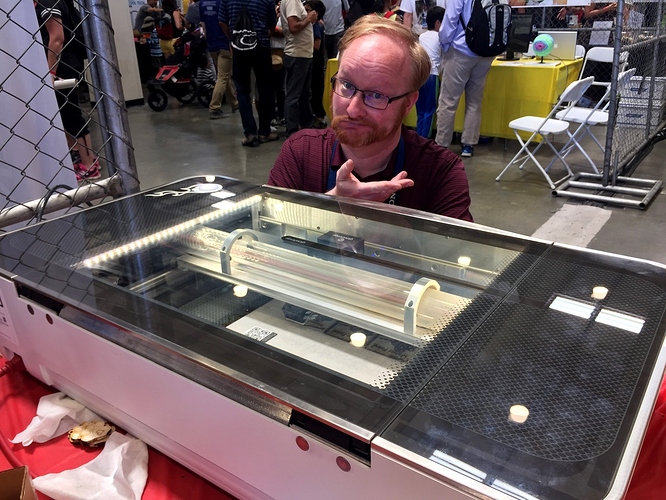 The whole experience was sensory overload for me. I wanted to see everything but there isn’t enough time to really do so. The event should be longer- But after ACTUALLY doing the event (as in having a booth)
3 days is long enough. 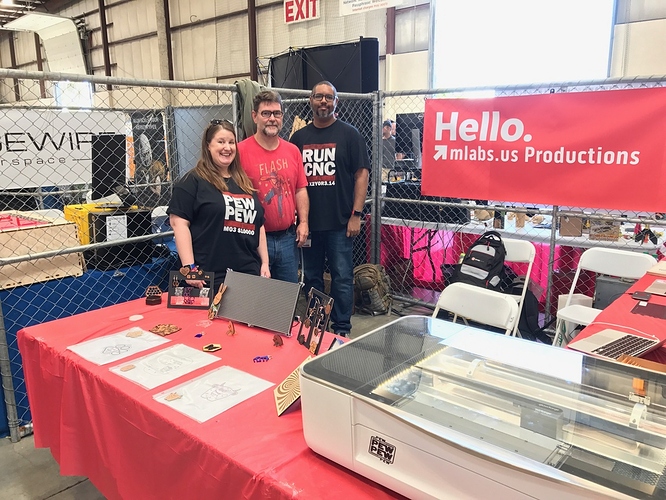 Thanks to those that stopped by our booth. It was nice to place faces to forum handles.

Aside from the head the SPU and the PRU were virtually identical (visually).

We did have some minor issues for the first couple days, but Team Glowforge Mobile Response Unit ™ handled it pretty quickly.

Sidenote to the folks that plan on using their unit on the road.

If you plan on doing things like Makerfaires or a CES sized event where there will be ALOT of RF or Wireless everything. Don’t. Thou it worked. It was a pain in the ass. Smaller craft shows are your best bet.

Also, If you are not using the Glowforge external filter and plan on using your own (i.e. a Purex or anything that pulls from the 4" outlet) make sure you place something that is solid on the bottom right-hand side of the machine. The intake will eat your table cloth.

The SPU was quieter than out PRU? But I am not sure. There was so much white noise it was hard to gauge.

I think that was it. I’ll add more when I remember more.

Special thanks to team Glowforge for making this happen. Congrats on shipping!

Oh Ha. I gave a couple of these to the folks at Glowforge that we dealt with directly during the fair. 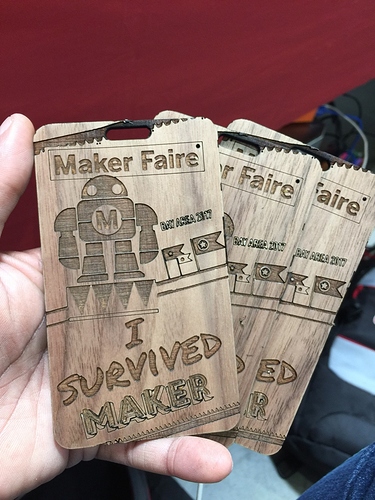 Great trip report! Thanks for the Easter egg, and for letting us take your last hedgehog…the nieces are going to flip out when they get them!

Thanks for sharing! I’m truly regretting not making this my first year after reading all these great posts.

If you print some of those RUN CNC shirts, I’d buy one.

Looks like the kids were really enjoying that one! Great job! (Cute hedgie.)

Yves & Kara it was SO COOL to have you with us last weekend! We’d met before at WMFNY but it was extra special to have ya’ll “behind the scenes” and surviving the madness that is a Maker Faire from a maker/exhibitor perspective. By madness I mean awesomeness…and sleep deprivation, lost voices, tired feet, etc.

I LOVE the badge you made me, thank you! Just one suggestion… 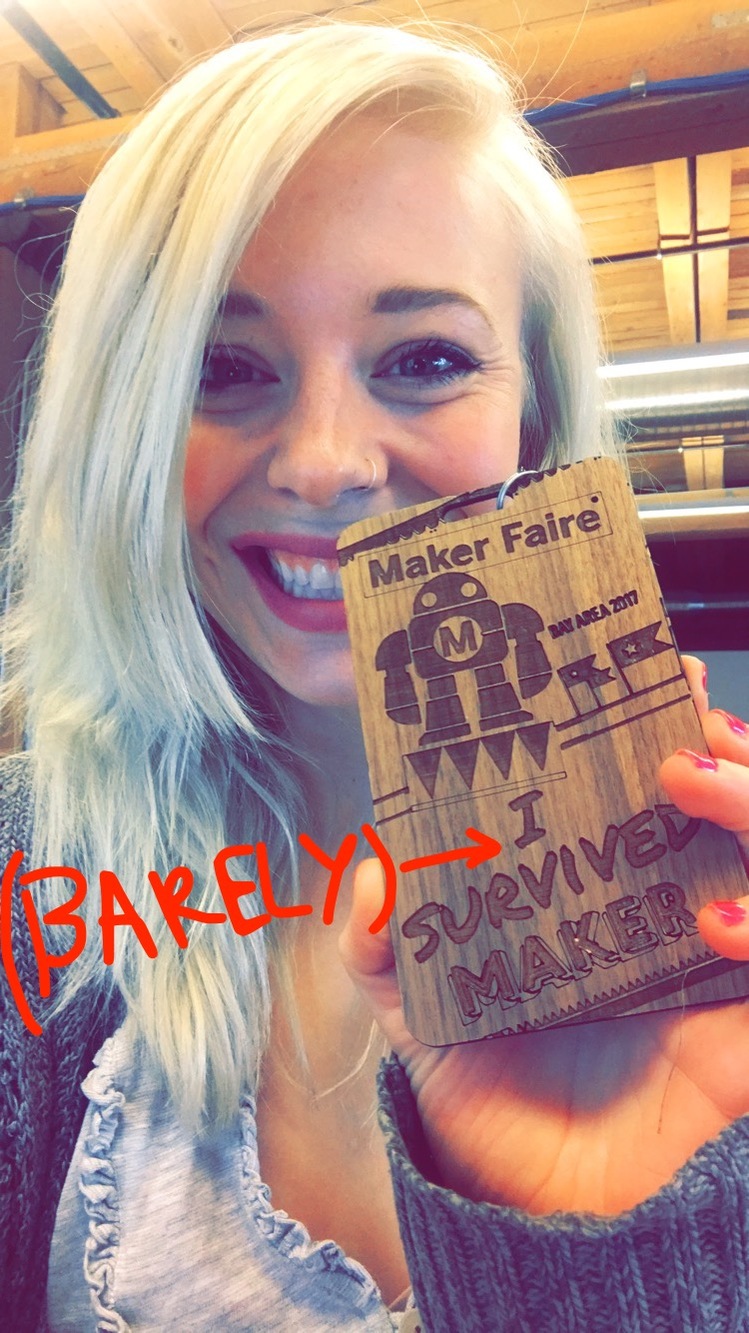 Aside from the head the SPU and the PRU were virtually identical (visually).

What is different about the head?

Later in the day a guy from https://www.acemonstertoys.org/box-bots/ came by our booth and asked if we could help him out. They brought in an 80W laser so they can cut out cardboard parts for robots but it died. They need some ‘wheels’ to get cut out. They gave me 3~4 sheets of cardboard and I got to work.

AHH! I also am a very thankful survivor. Still surreal that I finally met you both and was blown away at the passion and generosity you displayed. 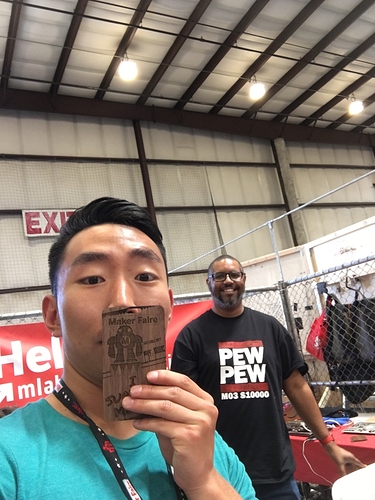 Well thought out display. Great job to you both. Love the detailed writeup.
Thanks

Awesome report and information, thanks for taking the time to document all of that. I always appreciate your attention to detail and willingness to 'Forge ahead into unknown territory.

Great trip report! Wish I could have come, just to get the Easter egg!

Great report. You had an awesome fair. Glad you were able to keep your Glowforge humming. That guy went through a lot of wheels. I did a few sheets for him Saturday morning and Sunday morning! It was fun to help out fellow makers. The Glowforge is just so versatile for these little things, like your banner clips!

Yeah… Look… I know there was a lot of cool info in this post and all. But I’ll be damned if my only takeaway from this is “That RUN CNC t-shirt is awesome.”

“That RUN CNC t-shirt is awesome.”

Yeah it is! My jaw dropped when I saw it. I want one so badly!

Ditto on the shirts, but my main takeaway that I forgot to mention is this:

One for the cool things of having a laser cutter is you can make parts for something on the spot.
i.e. brackets to hold up our banner. A couple mins in F360 I was able to whip these up.

That comment says alot for the Glowforge but more about the minds of @karaelena and his wife. Very impressive.

Ok I’ll be the ignorant one. Love the shirts but don’t understand what the number and letter combinations on the bottom signify? How did you make them, screenprint?

I didn’t even realize the shirts were laser-made! That’s so very cool!

It was absolutely lovely meeting you there, and I loved what you made. We’ve also got some ideas in the hopper for RF congestion. That drove us nuts too!