Okay, so everybody here is already aware of the generous Glowforge sharing that @marmak3261 has been engaging in. Turns out he does that in person, too. My husband and I were invited to lunch and demo at MakForge headquarters and we took him up on the offer yesterday. What a wonderful experience it was!

First order of the day, after the tour of all the ‘forged samples you have already seen (although there is no substitute for in-person observation–the quality of the engraving on his matchbox holder was just stunning), was Glowlunch: 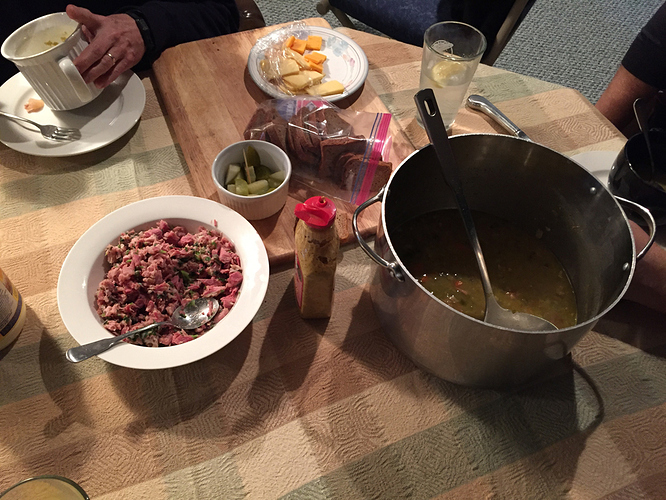 We got down to business pretty soon after that. I had brought a bunch of the cat stampings that I do for my cards, as I’m very interested in Glowforge’s performance with paper laminated to craft foam as well as its performance on multiple images at once. I also supplied Marion with Illustrator outlines of the images so we could compare auto tracing with cut files.

And let me apologize in advance for the vertically oriented video—I wasn’t thinking clearly at the time even though I knew better. Please don’t throw tomatoes! I also didn’t document the visit very thoroughly, I was just too excited and in the moment!

First we tried auto tracing one cat of a group printed on plain card stock: 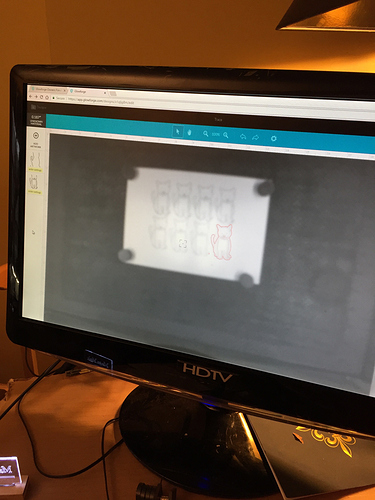 Holy smokes! The accuracy is amazing! 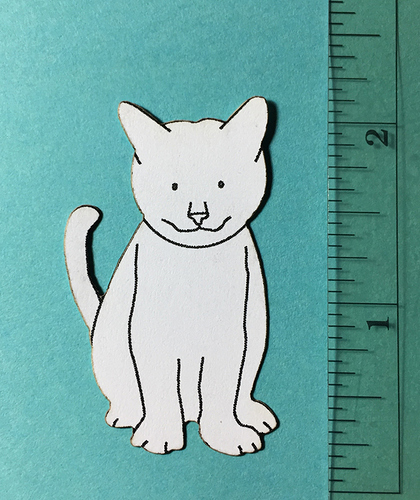 Then for grins we decided to try autotracing three separate figures at once. I don’t believe this is an advertised capability of the Glowforge but it might be in the hopper. 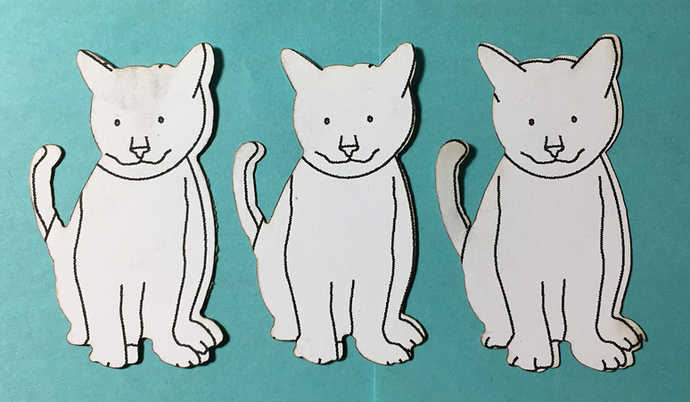 Results: oops, unusable. Okay, no problem, we have an outline cutfile. 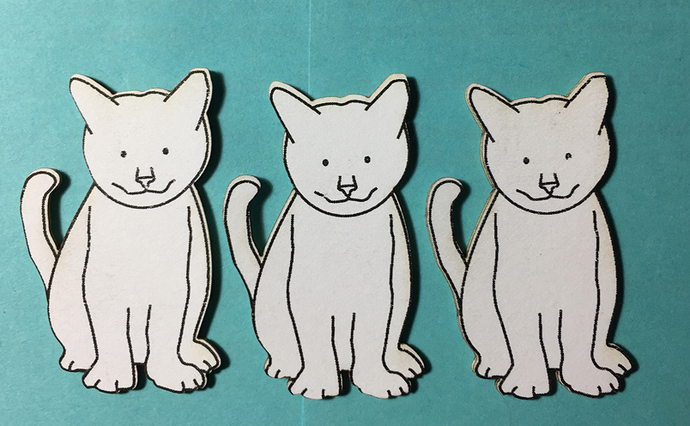 Oh yeah. WAY better. Still a tiny bit off but improvements are no doubt on the way. I can see a consistency in the discrepancy, and that should make it easy to fix either in the software, or in my placement of the files over the bed scan. These three cats were cut out of card stock that had 1mm thick craft foam laminated to it to make 3D stickers.

After that we cut out 3D stickers from a sheet that I had previously colored with Copic markers. 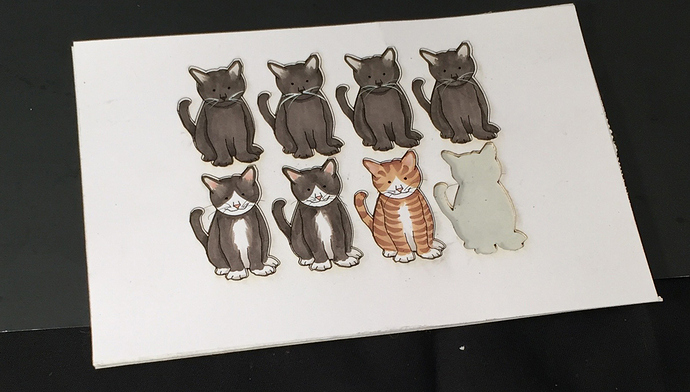 The cool thing is that it didn’t cut quite all the way through the base carrier sheet, effectively resulting in a kiss cut (yes, you CAN do it!). So the individual stickers can be peeled off the sheet leaving the others attached until needed. Woot!

Eventually we moved on to other materials: solid walnut that had been cut and planed by Marion, a piece of leather donated by @drea (thanks!), and an acrylic name plate for edge lighting, cut from Proofgrade 1/8.” Here’s a group photo: 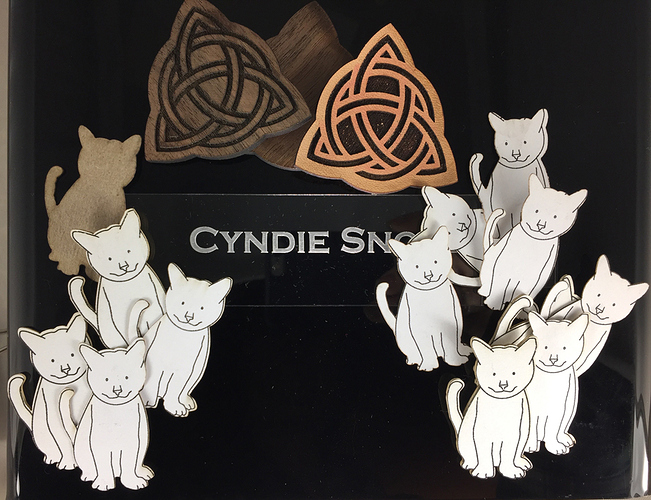 We also cut a cube out of 1/4" thick craft foam, which I failed to get a photo of.

Oh by the way, our operations were supervised by one of the most dignified yet laid-back cats I’ve ever met, Cole (no, he is not plugged in despite the appearance in this photo): 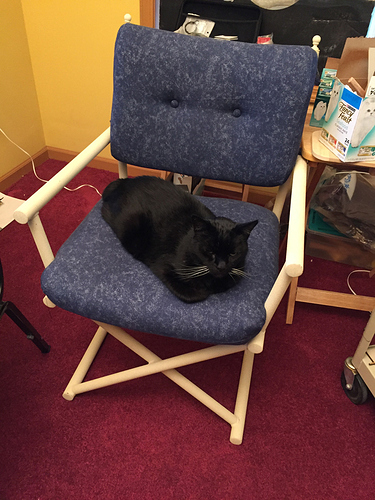 Before we left, Marion presented us with a parting gift, a bottle of his Private Vintage red wine vinegar. Awesome, and hard to top! 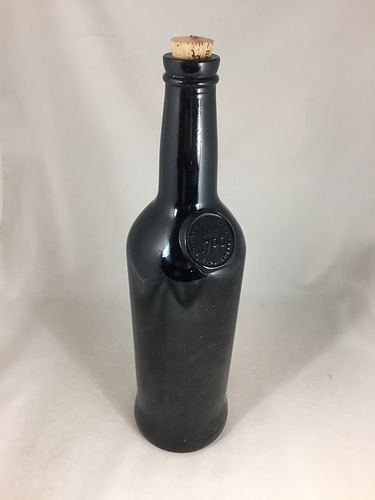 All in all a delightful day, with the nicest person (and cat) imaginable! The Glowforge access only whetted my thirst a unit of my own, pre-Release or otherwise. Soon!

Great report and so nice to see glowfriends being made in real life!

(Looks like a great time, great company and great food!)

Wow, that just sounds great all the way around. I particularly liked the flying cats in the video.

This is great!! Thank you for sharing!

So neat to forum (as a verb) in real life! @marmak3261 strikes me more and more as a renaissance gentleman!

Not surprised as everything I’ve seen from Marion is so personal and shows how much he truly cares about others.

Thank you for sharing you incredible adventure with us.

This was so much fun to read, though I’m sure not as much fun as it was for you three gathered there. The lunch sounded and looked wonderful, and I enjoyed hearing about your forging tests and cuts. Thanks!

Wow, what a fantastic trip!! Very cool. Thanks for posting.

This brings me joy - thank you!

Oh good! And, lest I’ve given the impression that I can drop in and see the MakForge anytime, it was a three hour drive each way. I wouldn’t want to get crossed off the list of Pre-Release eligibles prematurely.

What an amazing trip! Thanks so much for sharing.

Yes @marmak3261 seems like a very kind and generous soul. What a lovely experience for you all😃

For many reasons I’ve thought how lovely it would be to be neighbors with more of you, and this post just points out why. Thanks so much for “sharing” this lovely visit–@marmak3261 was the perfect First Pre-Release for so many good reasons.

Such a great thing to hear. This forum is amazing.
So glad you got to meet each other.

The cool thing is that it didn’t cut quite all the way through the base carrier sheet, effectively resulting in a kiss cut (yes, you CAN do it!). So the individual stickers can be peeled off the sheet leaving the others attached until needed. Woot!

I need a line item like and confetti to underscore my delight with that.
WOW

Cole and I had such a delightful afternoon. They are a wonderful couple. I first of all welcomed the occasion to do a cleanup of the basement work area. The Glowforge room was getting a bit littered with all the off cuts and masking and materials and prints were strewn everywhere. Lunch was a pleasure to visit and make connections. Lots of resonance in the sharing. I have been thinking of it as a play date! I somehow missed out on those growing up. I’m glad they are cat people because Cole felt right at home sitting in his chair at the table. His manners were pretty good, once we chased him off the table before we sat down. He loves company.

They came bearing gifts both Glowforge related and otherwise. 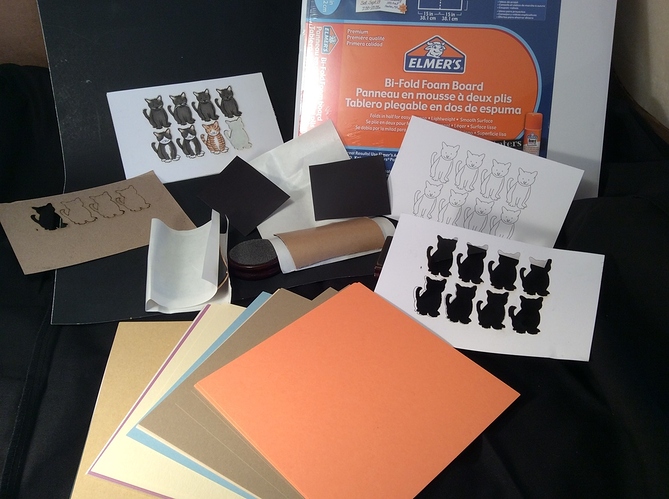 Cyndie does stamps and she brought some nice, sturdy stamp bodies (holders?) for me to use, plus the backing material that lies between the holder and the engraved rubber surface. I had cut some leather for the stamps I made, but this backing material is sturdy yet has the right amount of give. I really appreciated having her expertise to query. I had gone to Hobby Lobby last week and looked at stamping inks and was bewildered by the array of choices. She explained the difference between alcohol and pigment inks, which was great. She had brought some of her won ink pads to show and we inked up the two stamps I had made.

They brought a bunch of different colored cardstock that I much appreciate.I was getting tired of cutting the grey catfood carton chipboard. They also brought some foam core, project board to test out and some 1/4 craft foam.

I gave them the tour of the pool table where I have all the materials and a few finished prints laying around. Then we went into the office to check out the Glowforge and get to work on testing her use case. It was neat to experience the Glowforge again through their eyes and notice things I hadn’t thought of before.

Cyndie was prepared with several different versions of her artwork. Very cute cats! We began by trying to trace around one of the eight cats arrayed on white heavy paper. It was a challenge to isolate a cat because the tail of one was almost aligned with paw of another. We managed well enough to snag an outline to cut without getting something that would interfere. What got captured along with the outline was minimal. I haven’t done much tracing from the bed for cut and engrave, so this is a good thing to learn about more. 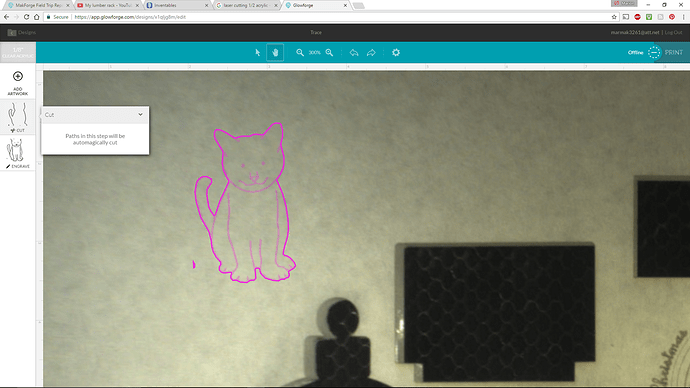 So this illustrates a good design tip to think ahead about when doing multiple items: make sure there is an area of white space a box can fit around to isolate the design you need an outline of or want to image for engraving.

Once we got that outline, we ignored the engrave and aligned it around one of the paper cats. As pointed out in the top post, we progressed to multiples. What I learned was that you can do multiples but need to place the cutting outline over each object individually, at least for right now.

So we progressed through different iteration of the cat pictures, eventually opening up the PDF from Illustrator that she had available.

In processing the PDF through Inkscape to tranform it into an svg to import, we ran into an error message I had encountered before. I post another topic about the issues we encountered transfering the file. It all worked out ok.

So we continued to the full foam backed cat stickers. Cyndie explained to me about Copic markers and how she colors the blank cat coutlines. I got to keep the set! Here is a closeup of the color work. Very nice! 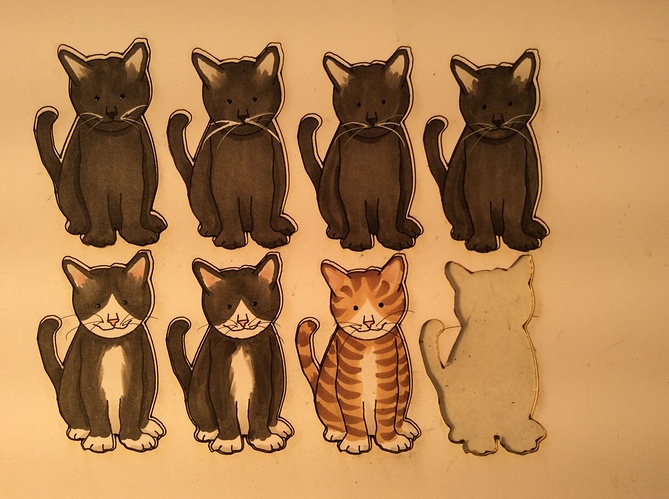 I tried to do an outset of the design, but Inkscape wasn’t able to do it with that design. I know why and I’ll address that in another post. Sometimes a single path is not a single path, even though it sure looks like one and processes like one. 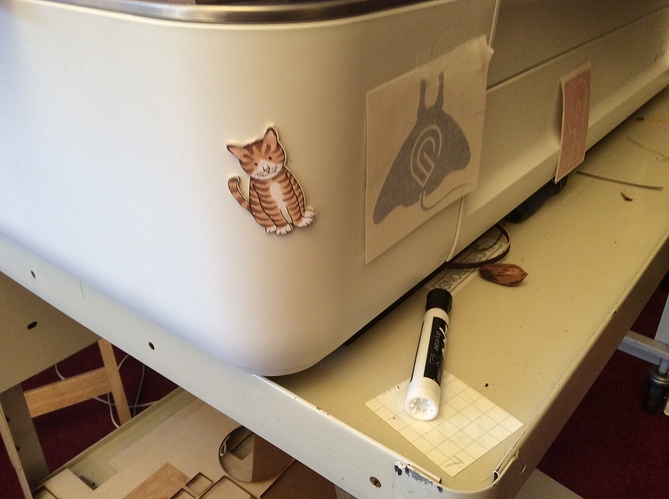 Cyndie’s husband does some jewelry and I would have liked to pick his brain about some of the techniques for assembly with the little bits and pieces of jewelry wire and rings I have. He gave me a few good tips though.

We then worked on processing a few other bits of material, going through leather and solid wood. I got a plus 1/4" thick piece of white cedar and we cut right through it one pass.

We engraved some leather so they got to smell what happens there. It’s not as bad as the rubber, but we didn’t process any of that.

I wasn’t sure what to do with the black craft foam, but she suggested a box. Great idea. We went to makercase for this box since it outputs directly an svg to simplify things and did a 3" inside dimensioned foam box. Behold the Borg Cube: 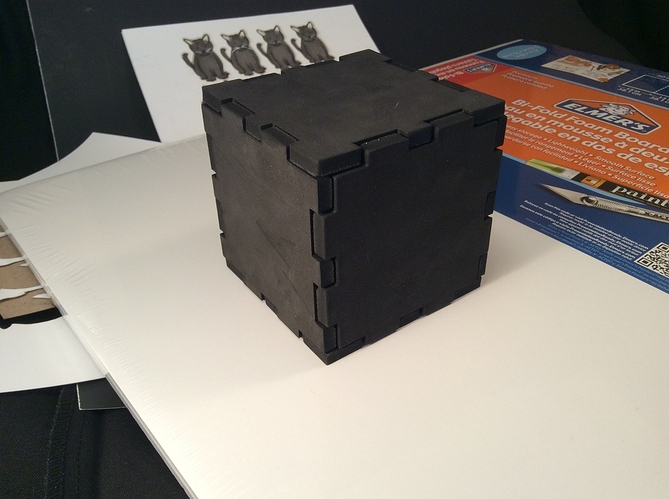 I didn’t put any kerf allowance in the file, nevertheless it took all three of us to hold the sides together to assemble the box. I’ll have to play with some settings for the foam, both in the box makers and in the Glowforge.

The final piece was the acrylic name plate. That was a quick five minute drawn in Inkscape to get the outline and the lettering. She has some LEDs to play with and can use this for the sign. It is so cool to peel back the masking on the acrylic and reveal the smooth perfection underneath. We had engraved the name in reverse so as to emphasize the depth of the acrylic. I hadn’t done that yet and it really worked out well.

So that about wraps things up.

I got a parting gift of some St. Louis libation, my favorite brew, Shafly Kolsch. They needn’t have brought anything but their curiousity, enthusiasm, experiences and artistic skills and I still would have come out ahead in the exchange.

Thanks for a lovely day!

The cat made the whole post that much better. Cats are the best.