Making a lot of hanging things, earrings, pendants, light catchers, and other decorations, that might be hanging on jump rings but would like to have bails of the same material. I had played with wooden chain that was not a spectacular success but it suggested a way that such a bail might be made.

This design is a bit extreme and every case might not survive, and the trick to making it work is in making it spiral rather than opening the gap in the same plane but it does work as seen here… 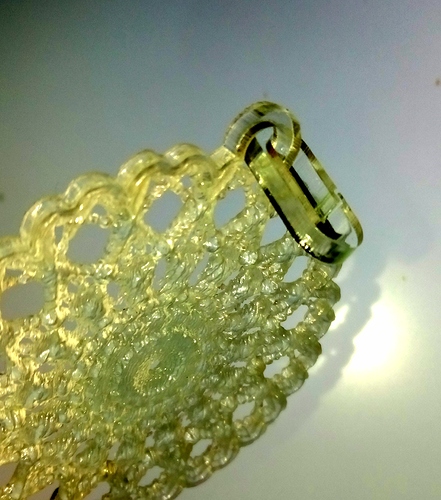 And the SVG is here…

26 Likes
Chain link file?
How small does scrap have to be before you cannot make something?
What's the smallest project you've done?
Attn Leather Work Yodas
bansai8creations June 18, 2020, 10:53pm #2

Cool idea–I’ve tried the idea of this with cut loops welded to the earring/pendant–but the acrylic is so brittle, it can actually break when stressed… (it’s possible the “weld” liquid added more internal stress vs. laser cut alone, so might not happen to these…).

it can actually break when stressed…

I made two and broke one (bending out instead of spiral) but once attached it is plenty strong and never has to be stressed like that again.

Nice! Now go make a long chain of them.

a long chain of them.

I did that with the wood ones. Even made a necklace. Only every other one needs to even open,

The Svg is now available to anyone who wants to give it a go, Lets see folks post their chains here.