Okay, so I occasionally engrave these boxes for a buddy of mine doing legacy videos for older people to leave for the younger ones.

This is what happens when the box isn’t held in place. 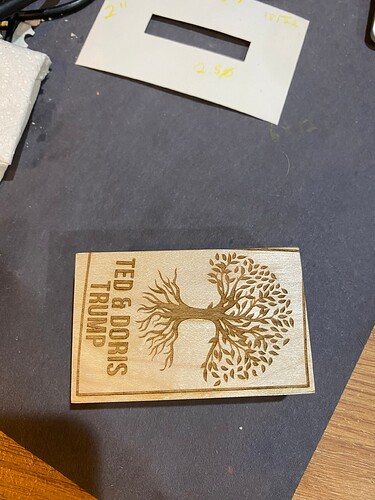 image1920×2560 434 KB
As you can see, that bottom line was eyeballed perfectly. Then as the head went back and forth, the fans slid the boxes left side just a hair on every single pass.

and I’ll simply cover the bad burn up.

My question is this:
What does an engrave on maple veneer look like at pg settings? Could I engrave the same image onto the veneer without burning through it, with similar darkness or should I just cut a piece to fit, cover it, and call it a day?

The guy has already seen it and is willing to just give it to the family and apologize for the mishap with it. He even said that we’re it not for the border, he’d have just tried to pass it off without saying anything.

Most veneer is thick enough that you could just engrave it again.

That said, could you not just use another piece of the original stock?

While it may look like it, that’s actually a completed box. The angle looks like a flat piece of wood. Also, he buys from Amazon and has them delivered to me. They come with usb drives embedded in matching wood. I then just engrave the tops, the bottom of the boxes(as seen above) and the usb wood enclosure.

I’ve got another thread around here somewhere ….

A new USB Legacy Box job Everything Else

A key point in saving time that newer people may not realize is the rasterize repetitive images trick and line it all up horizontally. The first part, 1 by 1, took an hour. Flipped over and did a single rasterized back, only 40 min. [Sept Legacy print]

In that case, veneer should work fine.

Looks like I never posted finals of these…I need to remedy that.

Business Venture with videographer buddy Made on a Glowforge

So, in an effort to expand his self made business, a buddy of mine is getting into doing legacy videos. You sit down with an older person, they go through a list of questions, pick out a few that have interesting answers, and then he films it. He wants to put together packages that make the prices he charges feel worth it(and really he’s literally charging roughly half of what established people are doing). So my role in this is he’s doing wooden encased usb thumb drives in wooden boxes and wa…

Okay. So if anyone needs an aid in finding leftover masking….take a picture at an angle. But I’m happy with how this cover up has worked. 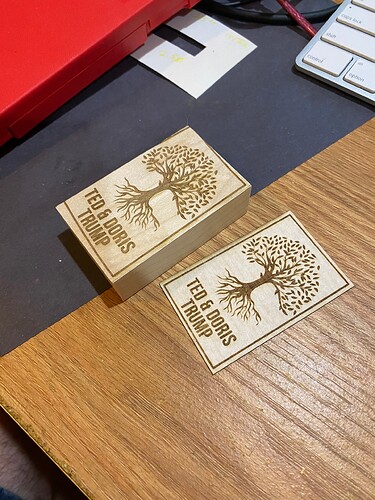 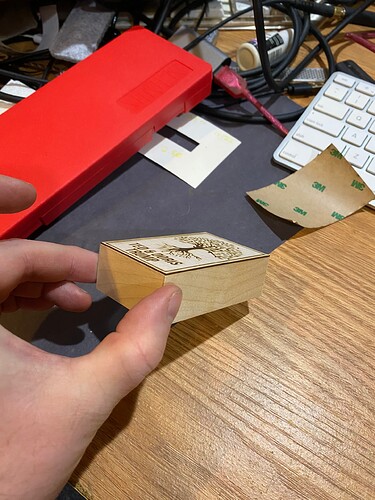 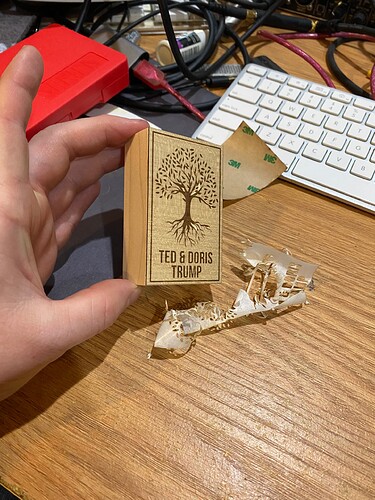 I purposely left the root and two branches spots to see if he can spot them, but I missed the D, &, both Rs, and the P. But you can clearly see the masking in the picture.

Plastic razor scrapers are perfect for removing fine masking bits. Just gently slide it across the area a few times, it snags all the strays.

I’m glad you redid the box… I can’t imagine selling the crooked one to anyone.

I don’t think the fan is doing that, my guess is the air assist is just barely brushing the top of the box as it moves across. I’d try it without the crumb tray next time – just boost the box up so the top is within 1/2" of the head and use the Set Focus tool to set the height.

The box is roughly 1" in height. Tray was out and it was sitting on top of three white tiles to bring it back into range. It sits pretty low in the 1/2" range. Tiles seem to be fairly slick. Didn’t think the box was that light but it apparently is. If i have to do another single like this, I’ll probably use the masking tape to two surfaces and glue them to each other trick.

Also, I showed up this morning at church and handed it to him and he loved it…but also had just handed the other 5 to a family member who was headed somewhere else about 2 min before I got there. Ah well…he still would have needed to copy all the files onto the usb stick anyway.

This turned out great! I couldn’t have given the crooked one to anyone…

I’ve used veneer quite a few times to cover some happy little accidents.