So, in an effort to expand his self made business, a buddy of mine is getting into doing legacy videos. You sit down with an older person, they go through a list of questions, pick out a few that have interesting answers, and then he films it.

He wants to put together packages that make the prices he charges feel worth it(and really he’s literally charging roughly half of what established people are doing).

So my role in this is he’s doing wooden encased usb thumb drives in wooden boxes and wanted to put the name, and other information and decorations on it.

These are some of the things we tried: 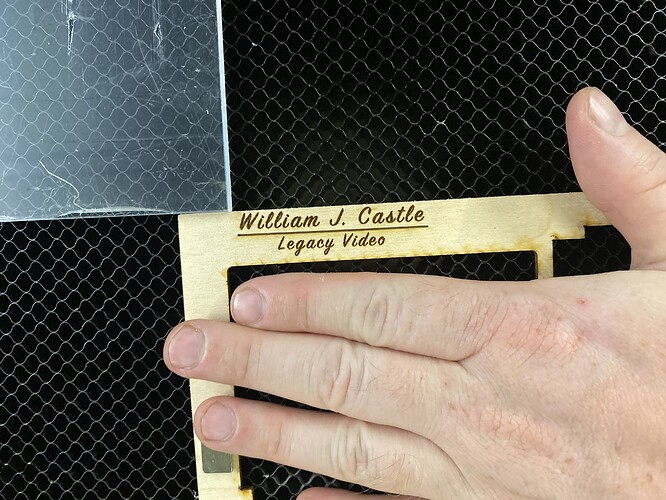 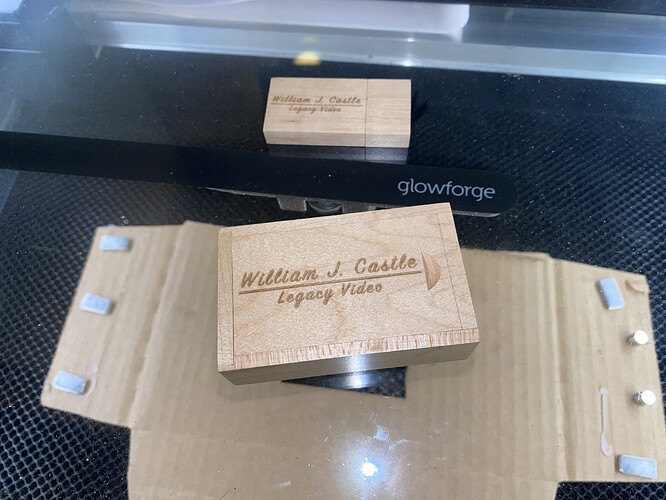 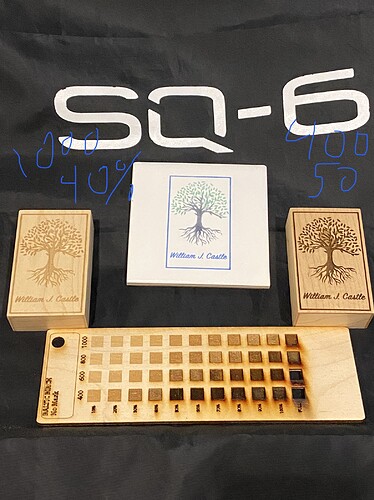 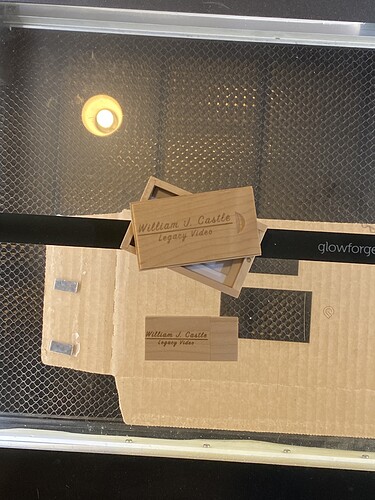 His name and business information are going to go on the underside of the slide lid. I tossed in the tile as a bonus idea. Thank you tile people here for that knowledge.

Another buddy suggested a hollow book to put the box in as a value add for higher tiers but he didn’t like that idea much. We think I’ll be aiming for just a tad lighter than the darkest burn for the images.

I really like the one to the right of the tile.

And I like your material test sample. Is that in the forum somewhere?

Very nice, my favorite is the 3rd pic…

It is, it’s just buried way way back in maybe 2017, 2018. It’s really just a bunch of squares all different colors that is a pain to set up the cut/speed values for each one but once set shouldn’t need to be done again.
I don’t have mine anymore as one of the early betas of the file previewed crashed or was reset and I lost it and haven’t been motivated to make a new one as I haven’t used the machine nearly enough. There are other ones around too. This was just one of the earliest.

Here is one I’ve used. Looking for that one.

If part of the demographic audience might be folks who only have a DVD player, perhaps a combo box that holds a disc and thumb drive? Target the size to match an Amaray case so that it’s capable of storing congruently with a disc library.

I tried Googling to see if anyone manufactured just the disc spindle button, but closest I got was an insert tray.

Here’s a version of the multi setting, just not the square one.

This will take you about 20 minutes or so to put in all 100+ settings in the GFUI but once you do you can apply to all materials. Just make sure to shrink it down or the operation will be really long and if it’s too long GF won’t accept it. [Glowforege Engrave Test]Glowforge Engrave Template 3.zip (1.6 MB) [Engrave Template Glowforge]d I would suggest ignoring many of the lower left operations!

An interesting idea. I’ll shot that past my buddy. I’m going to guess he says something about how usb thumb drives are already old tech that are fading out. Most all TVs in the past decade or longer have had USB ports on them.

Can’t imagine there are too many more CRT TVs out there these days. But, bonus, it is a value add to a customer’s perspective even if as a seller it seems not very good.

Bonus item: many PCs dont even coming with cd/dvd drives anymore to make the disks with. And blue-ray burners weren’t a big thing I don’t believe? Disks are certainly old tech.

It’s both a beautiful idea and a lovely presentation. I would suggest a box where the lid stays attached, or at least has a string or something, otherwise very very shortly it’ll be an open box with no lid.

It might be far too much, but take a look at this incredibly cool book box - it might be a nice mix of “these are stories” and “books contain stories”

Both the box lid and the usb cap are held in place by tiny magnets. 1 of which may or may not have escaped its bonds while 2 40+ year old men played with said magnets like 4 year olds.

Love this! Years ago I almost started a similar business. I think it would be so gratifying to help preserve life stories.

I also like the engraving to the right of the tile. Nice work! And good luck.

This is really nice. Etsy has a number of files for USB holders for wedding videos. You might find inspiration there.

Loving your work, what a great collaboration between you, I wish you every success! I think your customers will be wowed when they receive this.

I also like the ‘book box’ idea, but would take it one step further by making it a memory box with a section to one side designed to hold the USB drive with video and another section for very special pictures and the rest of the book box for small special trinkets (3D) type memories.

I did one of these for a friend’s new baby - called it Oscar’s Story (baby’s name) and it was an enormous hit with the family.

I love them all—your finished edges are especially nice.

Thanks. I think I did download that one earlier, but it seemed it used a really large part of the board, and I was afraid if I made it smaller, it would make the holes and squares the wrong sizes. Am I wrong in that?

I’ll try this too, and see which one works best for me. Thanks again.

I believe you’re right. But we still use DVDs. I guess because I haven’t heard that Blue-ray is that much better, so it wasn’t worth the cost to us. I do have an external CD/DVD player/burner that I hook up to my computer via USB. It works for what I need.

If you take the file into whatever you use to make your files, you can delete the entirety of the bigger cut portion and only run the engrave patterns. While the only picture in that post is of the cuts, the zip has the functioning test sample.

Great idea! I recorded my Mother answering questions a couple of years before she died in 2009. We all cherish the video.