First up, the lovely city of Portland, Oregon and the Willamette river running through it. The map is walnut veneer mounted on a mirror, then set into a walnut frame. I had to break the engrave up into four parts (a different color in NE, SE, NW, SW) and run each separately without moving the veneer so that the system could handle it. 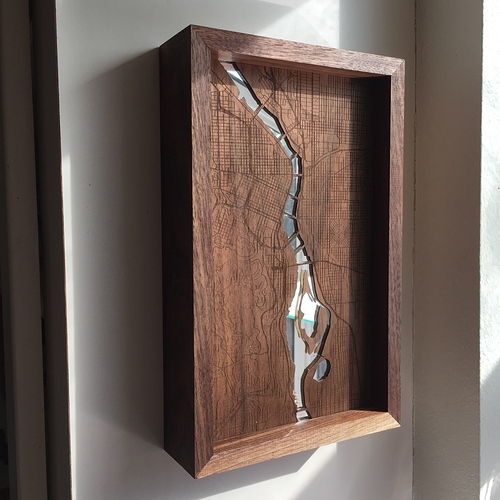 Next, a US map for my partner and I to track our travels—where we’ve been and where we’re going next. The cork is 1/4" thick and was scored with the beam focused below the surface so that the line would be a little wider. The outline of the country is 1/8" walnut I resawed and planed down from a scrap of 1x12. It’s a little thicker than Proofgrade walnut, so I slowed the speed just a bit and it barely made it though. Finally, I sprayed adhesive on the back of the walnut and stuck it tight to the cork. 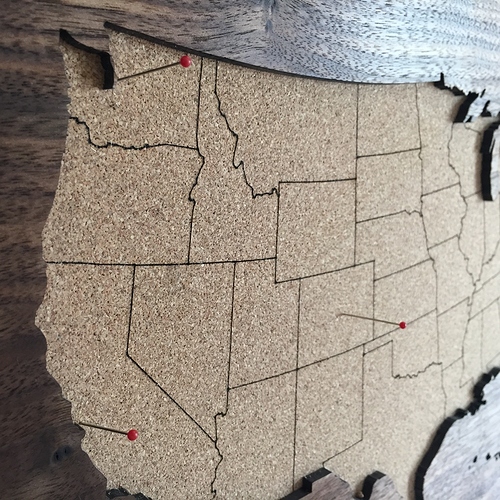 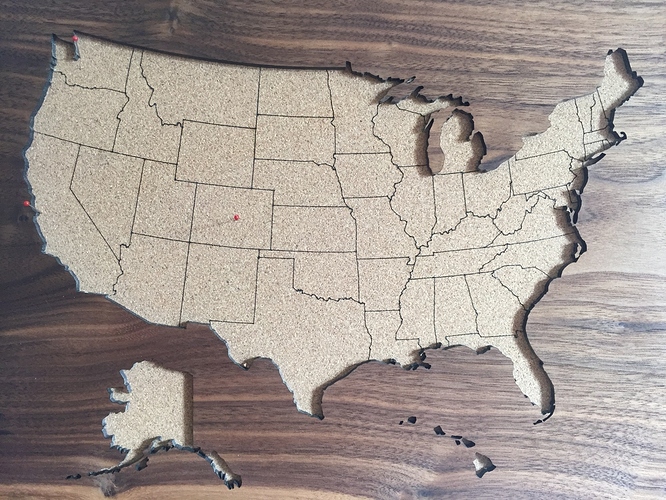 Oh gosh, these are fantastic projects! Love the idea of the cork USA. Now you need a cork world.

That map is a cool idea…I need to do a world map for my brother…there aren’t many places he hasn’t been for either work or vacay.

Cork world is in the works!

I love the travel map, would you mind if I steal this idea for a gift for my husband?

And the use of mirror in the Portland map is brilliant. Seriously.

Very nice! Can you be a little more verbose about what you mean when you say

[quote=“nathan_p, post:1, topic:12199”]
I had to break the engrave up into four parts (a different color in NE, SE, NW, SW) and run each separately without moving the veneer so that the system could handle it.
[/quote] It does look that large. Any thoughts as to why the "system couldn’t handle it? Were the files particularly large? I am interested in doing some maps when I get my zapper so I am curious about this. Thanks for any insight you can give!

I really love that cork map! That’s a great idea.

These are stunning! You, obviously, are a skilled and very artistic person. Thank you!

I love both of these, despite the fact that my neighborhood didn’t make it into your frame (I’m a bit further east). It’s also great to know there’s a real live

One area that I want to go that I haven’t been, yet…nice map engraves.

The Portland map was 1.9MB. When I clicked “Print” it would sit on the “Preparing your design” stage for a long time, then error.

The Glowforge interface treats different colors as different operations in the interface, and lets you specify what it does with each. So instead of the roads all being black for engraving and the river being green to cut, I had to break the engrave into four separate colors. Then I would mark all but one as “Ignore,” engrave it, mark it as “Ignore” and engrave the next, and so on. Finally ending by setting the green to “Cut” and ignoring the rest.

Here’s a little screenshot of the file in Illustrator: 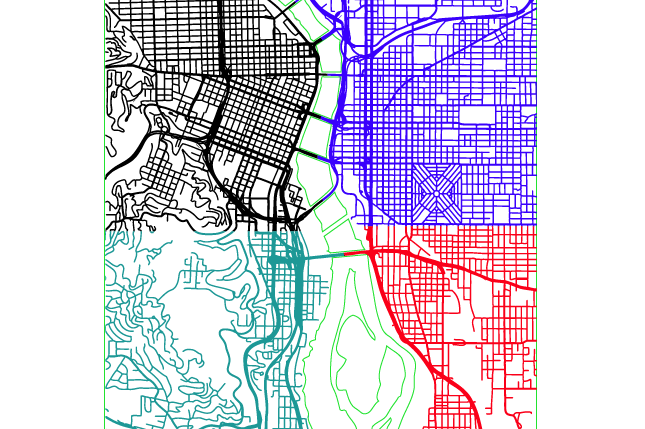 And here’s how it would be in the interface (I’ve got cork in there, not veneer, but the idea is the same): 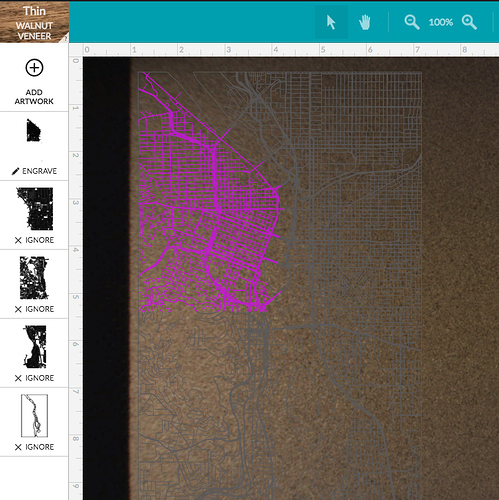 Even if there weren’t the error, the long engrave time is a lot nicer when it’s broken into chunks so I don’t have to babysit it for so long in one stretch. Engrave one part, go eat dinner, come back and engrave the next, and so on.

There’s the tiniest line visible on roads that span the sections, but with more careful slicing I could put it where it’s not noticeable.

that makes total sense to me. as does the idea of figuring out the slicing in a way that might hide any issues w/four separate engraves. thanks for the explanation.

Thanks for the insight! I would have guessed 1.9MB would be handle-able, but what do I know. That does not seem that big. I see the benefits of slicing it, too. Again, thanks!

Thanks for the insight! I would have guessed 1.9MB would be handle-able, but what do I know. That does not seem that big.

Yeah, who knows. Maybe the server was having a bad night that night. And the way the system is updated, what works one time may not the next, and vice versa.

Oh my gosh. This is fabulous!

Awesome! How did you get your vector city map?

These are amazing. Doing maps like this is one of the biggest reasons I wanted a Glowforge. I want to do a small map of every place I’ve lived. I can’t wait.