Sorry if this has been covered before. I’m trying to do a double-sided acrylic image, but am having a margin inconsistency which is quite annoying. I ran a first pass with the front graphics, ending with a cut of the outside. Then, I flipped over the cut to do the back etching, but for some reason, the margins appear to have changed?

I haven’t moved the acrylic piece, so it seems like it should be able to engrave in this area… Note in the image the gray artwork, which won’t seem to etch.

The particularly annoying thing is I can’t just rotate the piece, as it’s close enough to the upper left edge that it would just be in the lower right edge if flipped, and still out of the print area…

Any ideas? I suppose I could use GF to cut the acrylic smaller, but that seems like a waste of materials. 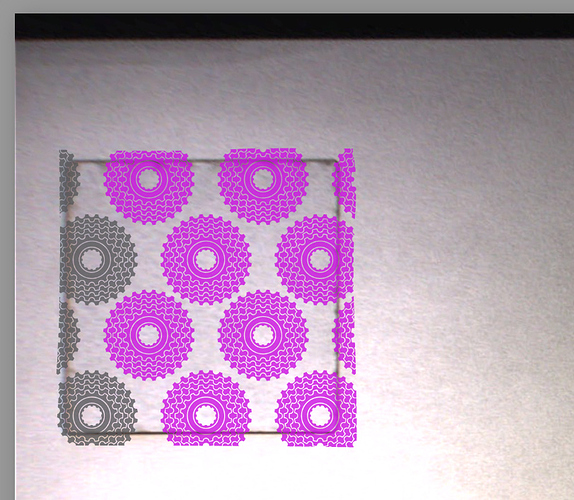 The grey items are placed outside the allowable engrave area, which is partially determined by the LPI settings. Since the overall piece isn’t very large, I’d suggest working near the center.

@dwardio thanks. Did not know that LPI determined the edge margins. I tried lowering the LPI settings, but that didn’t seem to help much. I’ve moved the piece to the center, which will work.

Hopefully, future versions of the software might give a notice when pieces are close to the etching margins.

I think speed affects the margins, not lpi? @Jules , you got a clue here?

As you move the files around the appearance of grey borders tells you that you are near the current limit. If any of it crosses into the grey those object will not be engraved…

Yeah, you can slow down the engraving speed and reduce those margins significantly.