Made the and put it on 4x4 tile, centered it to tile but didn’t come out centered, guess I have to figure that offset out as I don’t have snapmarks yet and can’t be putting stuff on things that won’t be uncentered… but just got my GF 2 days ago… colored with black marker and wiped off!

If you put the tile in the center, under the camera, you’ll have the least amount of position difference, and the further away from the center, the more offset there will be, and thicker the material, the greater the difference thanks to the fish eye. Mostly.

Put a 4 1/4" square centered around your calendar art in your design program. Color it red or something not used in the rest of your project. Make sure there’s no fill.

Upload to the GFUI. Stick a piece of copy paper on the bed, set the material height iin the Use Uncertified Material pop-up window. Set the box to Score - max speed, 5 power. Set the calendar art to Ignore. Run the job.

You’ll have a light square the same size as your tile. (Looks like the standard Home Depot tile, if not then use the actual tile size when creating your square.) Place your tile. Reset your material height (or let the GF do it after you hit print). Set the box to Ignore and set your artwork for the engrave. Ignore how it looks in the GFUI. It will be centered. Hit print.

What @jamesdhatch said or use a corner jig:

Thx for the tips of centering all, came out much better for me now 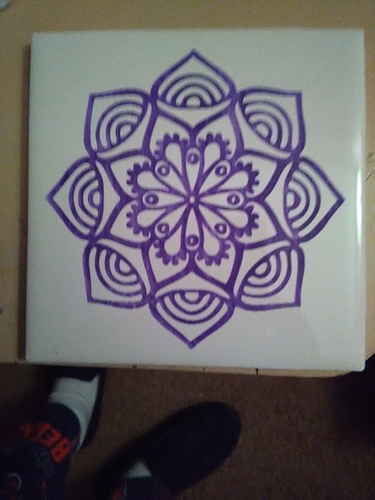 For tiles, I have a cardboard jig that I made to help with the centering issue. Mine fills the entire bed, so it’s easy to just throw in one or how many every I want at the same time. Like @bansai8creations said, the center of the bed is typically pretty accurate, so I usually dont use my jig if it’s one tile. And like @jamesdhatch said, the outline square is great! Just dont forget to turn it off after or even before you’ve aligned it; trust me on that one

Glad to see you’re getting used to your new machine!

Nice! Don’t forget to credit Kyle Emerick for his design per his request and license agreement.

I wonder if Kyle heard from Disney?

Really? Someone does something awesome, you don’t spit in his face. Its ungrateful comments like this that make me not want to share here.

I’m not spitting in anyone’s face, and I’m certainly not ungrateful, I’m just curious where this sort of thing falls in the world of copyright and whatnot, in case I wanted to try my hand at creating something like this.

Disney’s notorious for suing people, and I’m not sure I would publish this sort of thing for fear of getting sued to death by the mouse. I just wonder if anyone knows is this guy somehow worked out a deal with them, or if Disney doesn’t care, or if they’ve just not noticed?

I love the idea of the themed aztec calendars, and Star Wars and Marvel are really good themes; they are deep worlds, with a lot of potential characters and iconic images to include/ The same could be said for the DC universe, Harry Potter, even Buffy the Vampire Slayer. Heck, straying from the fictional themes, you could make a revolutionary war commemorative calendar, or ones themed around sports calendars.

Anyway, I think that the question is entirely on topic. As makers who are eager to share our creations (we’re here, right?) asking about if anyone had trouble with supermegacorp (In this case Disney) suing them is good for all of us.

So, let me rephrase: Has Kyle, the great dude who worked hard on something and sent it out to the world so we can all make great things, been approached by the oppressive copyright holder for all of the characters he is depicting? If so, do we know if he’s talked about it and has any advice for the rest of us?

anyone knows is this guy somehow

He is a member here. Ask him.

Hey @kyle_emerick, I didn’t realize you were a member. I understand if you may not want to discuss this openly, but I’m curious about if you had any advice about the legal concerns that come with releasing things that are copyright/trademark-adjacent. I’m a bit gunshy about liability, I released an electronic project a couple years ago and had someone outline some concerns (a lawyer friend, they know how to put the fear into you) so now I try to tread lightly.

Just like @DesignsByPhil stated, it was released Creative Commons “Attribution + Noncommercial + ShareAlike” licensing. Meaning you are to attribute me if you make it, you can’t profit from it and you can modify it. I feel just fine with another piece of fan art being released. It was released to spawn creativity in the maker community. That should be obvious since I have never once tried to profit from the design. This design is one that people can choose to make for themselves. If people are trying to profit off a companies IP, that is their problem.

To boot, I have a huge email string with the head of the Stan Lee Foundation. She contacted me. They wanted me to work with them on helping to release a new character. We got almost all the way to producing similar pieces to my Marvel design with a new character, but had to stop due to all the legal issues Stan had to shift focus to.

Between Disney even among fans and just about anyone else there is a huge difference, A big to-do was made when Disney sued a child day-care center for paying someone to put up a number of Disney Characters. When it made the news Universal paid for their own artists to come paint Bugs Bunny, Daffy, Sylvester, and many of their other characters, on the freshly repainted walls.

The amount of PR value far exceeded the costs as they got the gold star and Disney got a black eye. But I don’t think that has changed them. I even worked on a Parade project for them and they threatened major pain if I even took out some of my own work as employment work samples.

I was working for a contractor, but it was in engineering and not the actual construction,