I keep on being reminded of projects I never got around to posting! This one the recipient has access to these forums (though I honestly don’t think he’s ever logged on) but just in case I didn’t want to post until he’d received it.

The full thing was cut out of PG ply. There is a layer of green fabric sandwiched between two layers of the outside edge, and the shields are held on with sticky-back velcro (in case things change in the future!)
In the picture it’s being held up by this stand (it worked really well - I’ve made a few of these) 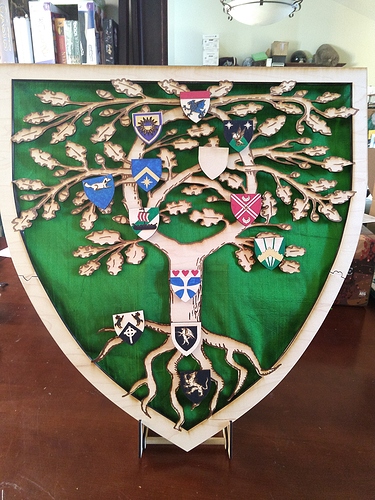 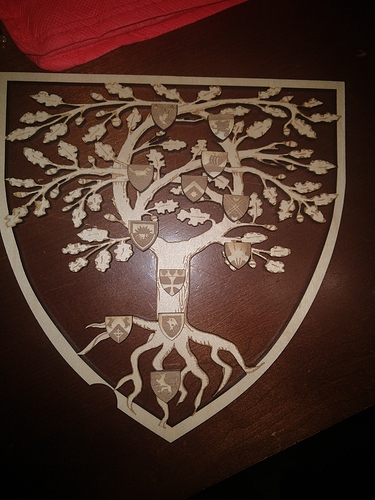 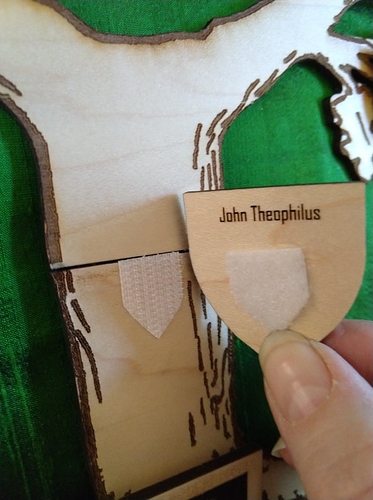 In case anyone wants to give it a shot: Medieval Family Tree.zip (947.2 KB) I have a Basic, so it includes a way to cut it in 2 pieces and then assemble after

This is great! I love all things medieval…so a treat to see this. Nice work!

Thank you for the file.

This looks wonderful! Thanks for the share as well.

Curious as to the connections, Is that a knights tree? It would be also a cool thing to trace the evolution of the kingdoms.

Nice work, bet he was thrilled! Thank you for sharing the file.

A Kingdom family tree would definitely be fun. No roots there, you’d have to start with Berkeley as the trunk

I feel like this is a total gimmie but - Have you heard about the SCA?

I guarantee there’s a group in your area. You’d be part of the Kingdom of Antir in the Principality of the Summits

No roots there, you’d have to start with Berkeley as the trunk

There are many roots to the SCA from King Arthur and Camelot to the somewhat obscure attempt to bring back the Victorian fantasy and being the “Last Tournament” that the event that was five years in the planning was washed out by a huge storm. Much of that Victorian fantasy side of things has been lost much to the detriment of the ideals, and little understood these days the pure goal of an alternative lifestyle devoid of modern horrors that has many non-Medieval roots that were churning like a mountain stream at that time.

By comparison the actual Medieval period was pretty horrid sunk in ignorance and every sort of bigotry all very opposite of the early SCA.

She’s a witch! Burn her!

She turned me into a newt!

No…I’ve never heard of it. I am curious and will check it out. Thanks!

What a super cool piece! The Velcro is a genius idea, and your painting is marvelous. Thanks for the file!

No…I’ve never heard of it

I think at one time the SCA was a large portion of the entire web though the entire web was very much smaller at the time. However there is still a sizable presence that you might find very interesting.

Outstanding piece! I’m the president of the Clan Donnachaidh Society of the Gulf Coast, and just returned from Scotland where I was doing some genealogy work… This gives me so many ideas. Thanks for the share, you’re awesome!