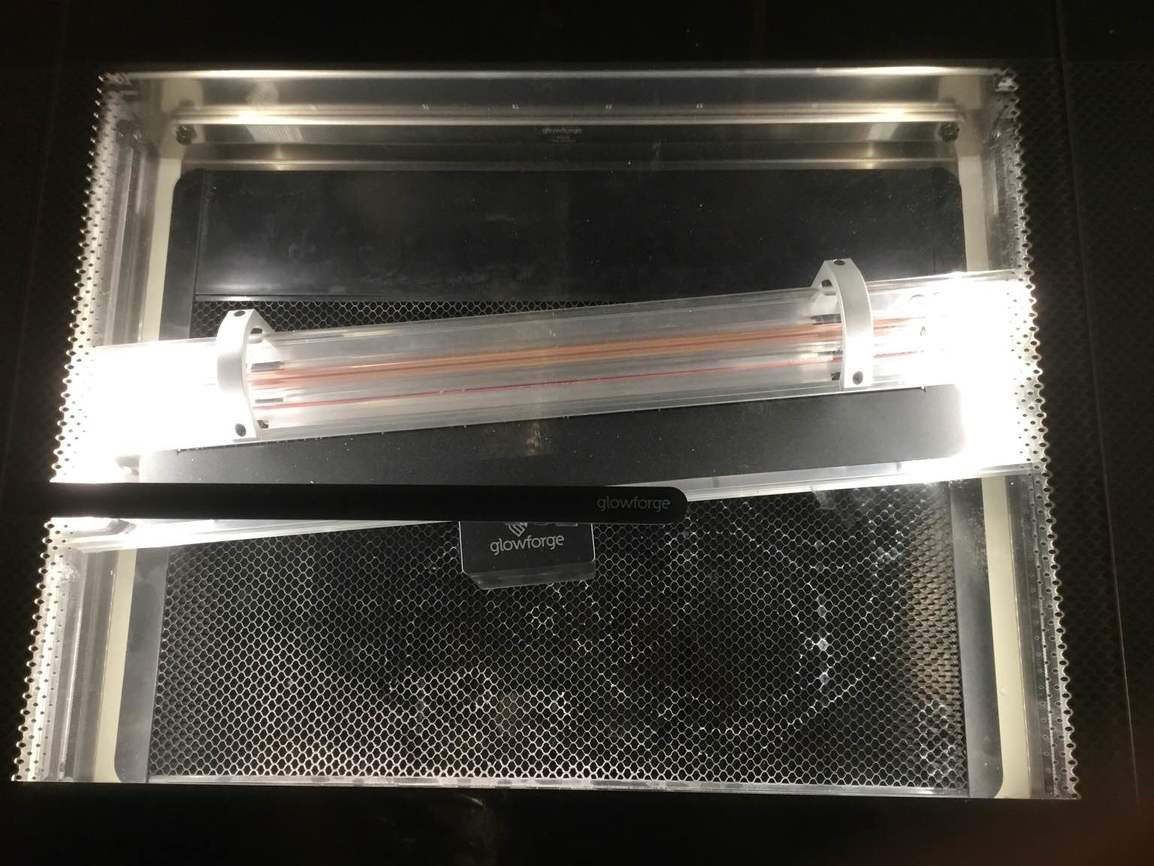 It happens. Try the instructions from Rita here to put the gantry back on the tracks.

(Make sure nothing is placed on the plastic area of the tray - keep it on the gridded portion.)

…and shouldn’t they check for that wire on the left side that you often warn about?

That’s something to check if it happens every time on Startup, but we don’t have enough information on this one yet to suggest it. (It also more commonly happens when something extends over the plastic area of the tray or there is debris in the track and the wheels jump the track. I knocked mine off once by having the plywood extend over the plastic. You can bet I never did that again.)

Hmm, my first unit was toast after this happened…

This happened to me before I figured out your material shouldn’t extend past the honeycomb area of the tray. I was trying to cut at the end of the sheet to conserve material and the gantry hit the end that was hanging over. I thought I’d ruined it because of @timjedwards’s experience, but thank goodness all I had to do was turn it off and straighten it out, and it was okay again. Whew!

went by work and fixed it but it seems it has done it again. There was no debris where the wheels rest. i will look some more tomorrow.

I also did that once due to medium

extending over the lip on the edge of the tray. With the machine off I just remounted the gantry on the rails and have never had an issue since.

You can bet I never did that again.)

It’s been a lot of years since I had a scare like that! I don’t know what mix of hormones were dumped into my system, but adrenaline was chief among them.

I don’t know what mix of hormones were dumped into my system, but adrenaline was chief among them.

Amen, brother! Took half an hour to get my heart to slow back down.

When my gf was caught on the cable causing alignment issues it wasn’t as obvious as in your picture. I don’t think that will be your issue but here is the link to my problem and GF fix.

I made a cut out of the boots for holding the crumb tray in place( which works great ). So I wanted to do some test to see where the cut region would be with the new placement of the crumb tray. I placed masking on the crumb tray and started a low power cut. I noticed that the cut wasn’t even along the bottom and appeared to be skewed. I followed the calibration instructions for perfect square multiple times but no success. https://glowforge.com/support/topic/troubleshooting/perfect-squares …

Thanks for letting us know about this. I’m sorry replacing the laser arm didn’t solve it.

I’ve extracted the logs to investigate your Glowforge, and I noticed the material in the bed moved during the print where the laser arm shifted off the rails. Its possible the material blocked your laser arm from moving and caused it to shift of the rails.

Would you reset the laser arm again and ensure your material lies within the raised bounds on either side of the crumb tray? Carefully watch the next few prints and let me know if you notice anything out of the ordinary. If you can capture a video of the issue, please do, and post it here.

Like others have mentioned, you can also check if your laser arm is getting caught on something in the unit. Here’s how:

Checked the wire and it was fine. I may have found an issue but not sure. Had a couple of small pieces of plastic on the floor next to the crumb tray but they were short enough that the piece of aluminum that hangs down off the gantry should not have hit although if the two had been stacked somehow it could have caught.

It has not done it since so we may be good. Printed a few plates monday.

I do need to get a video camera up and going. Used to have one aimed at the laser till i needed it for another project.

Thanks for the update. I’m glad things seem back to normal!

I’m going to close this topic. I don’t expect you’ll run into this again, but if you do, please don’t hesitate to open a new topic, and we’ll continue troubleshooting where we left off here.