Mirrors... Can it cut/engrave mirrors?

Cause you know… It reflects and such. Haha, I tried looking it up, but with no luck. Also, would the backing be an issue?

In previous google sessions, I found examples of this. So yes, but you would need to apply something on the mirror before engraving. A wet piece of fabric was 1 of the examples.

One technique I’ve had luck with, is using mirrored plexiglass.

mirror your image (sorry for the pun) and engrave it on the back of the material.

Sure, it’s not a glass mirror, but it safely gets the job done.

Oh, that’s genius! Donno why I didn’t think of that.

I’m no expert on this and haven’t tried it myself (yet, plu i plan to try the mirrored acrylic), but I believe glass is opaque at the wavelengths this laser(CO2 lasers) operate at, so you will not have a problem engraving the surface of the mirror(because the laser stops at the surface of the mirror before it even gets close to the reflective surface, which may be able to be cut, I don’t know). As for making deep engraves or cutting it, that is another matter.

Doing standard glass engraving on a second surface mirror (most are. First surface mirrors are expensive and you have to TRY to order them) should be trivial. But may require different settings than for a similar thickness of same material without the reflective backing.

For cutting… absolutely approach from the back (non-reflective) side.

Wouldn’t it be easier just to use something like TherMark to do lines? They even have some different colors.

I have engraved mirror from the back and front. The back is preferable as it is safer (should not reflect back at you). If you are engraving from the front I highly recommend using a green adhesive laser mask. It should minimize the reflection off the mirror. Also don’t hang over the laser and watch you handywork just let it do its thing. Be aware that if you engrave from the front you will most likely end up with a double image in your mirror as the engraving will reflect off the silver backing.
J.

@matt_stark it’s a density and properties issue. Glass has a much higher melting point etc. than acrylic

Thanks, I did have a question about etching the silvering off of the back of a mirror. I was worried about the gases. Sounds like it will be OK. Have some ideas about reversing my image and etching the back, then backing the mirror with another material or contrasting paint. Can’t wait.

There are mirrored acrylics from inventables that work wonderfully. Been on a mirror kick lately with it. 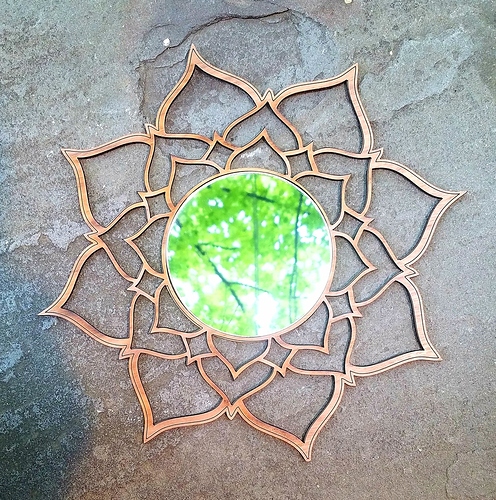