Whipped this little guy up in a few minutes today. Had some small sections of PG walnut hardwood left on my initial sample that came with the forge, so I didn’t want to waste it. Just a simple ornament that my wife already fell in love with. 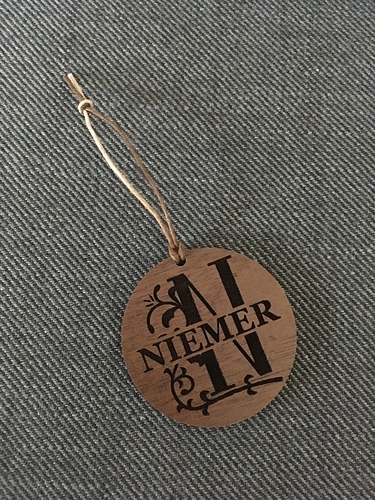 Assume you know this technique?

it was just single sided, but I may have to check that out and do some double sided ones soon

In practice when using this technique the second side is really easy and doesn’t add much time, other than duplicating the engrave.

The one caveat of course is now you don’t want to engrave too deeply, or you might engrave all the way through by accident when you do the second side. I mean I’ve heard, from a friend, who definitely wasn’t me.

Whipped this little guy up in a few minutes today

Use to say that with the 3D printer.

Glowforge has raised the bar. Can still make things on a printer that GF cannot, but for something simple and fast, Glowforge for the win.

I purchased a 3D printer about 4 weeks before my GF came in. It’s only been used like once… luckily I got a good deal on it lol

Yeah you need to spread those kind of purchases out. The 3-d printer is cool in it’s own right but in needs some major attention to figure out how to make it do what you want it to.

Yep lol, I’ll use it eventually. I just don’t have room honestly right now for everything lol

The Glowforge is much better in the way it provides instant gratification.

Yeah, just a different way of making things though. 3D printer is great for stuff too

Yep, I have Makergear 3d printer, Xcarve CNC and Glowforge and they compliment each other well.