@jamesdhatch — are you sure six will be enough? 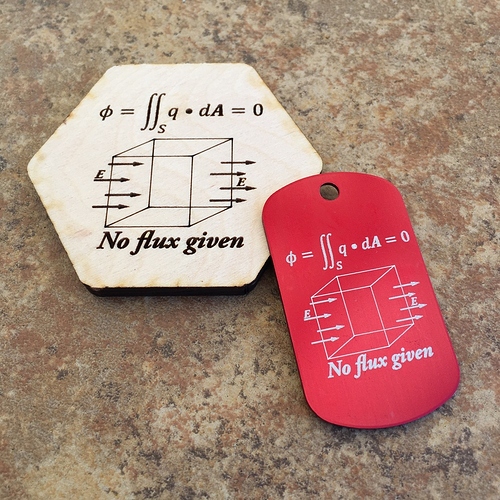 Not sure how far I can safely carry that joke here…great job!

(Where the heck is @jacobturner ? He ought to be getting a charge out of these.)

Please can somebody explain it to me. The equation says the flux is 0 but why is that a joke?

Must be a popular geek/nerd/physics joke, because it sells

Ha! Me too. I think if I remove the wording, I just might get away with making something with this on it. All sneaky style.

No Flux given. Replace the word Flux with plural of the most popular 4 letter word. Means “could not care less”. Might not translate well outside U.S.

Thanks. Makes sense here also, just me being dense.

I love the look of that anodized aluminum one!

It wouldn’t make for a good simple image, but a story problem where you NEED flux in order to solve… but it isn’t provided… would make the joke sentence tell itself.

But yeah… would NOT be a good picture/shirt