Mother of Pearl for Inlays (Part 2)

A couple weeks ago I tried cutting a standard blank of Mother of Pearl for use as a musical instrument inlay. It was a complete failure.

cutting thick MOP (0.06") is pretty much impossible to get a clean usable cut. It shatters, burns or turns into a cement that clogs the cut. No power level, speed or number of passes has given anything worthy of using for an inlay.

Thought maybe a thinner material could work. So I tried a very thin 0.008" Mother of Pearl veneer. This is thin (and expensive) stuff, only about twice a thick as standard copy paper. You can see the difference between trying to cut the thick shell (right) vs. the thin MOP veneer on the left. 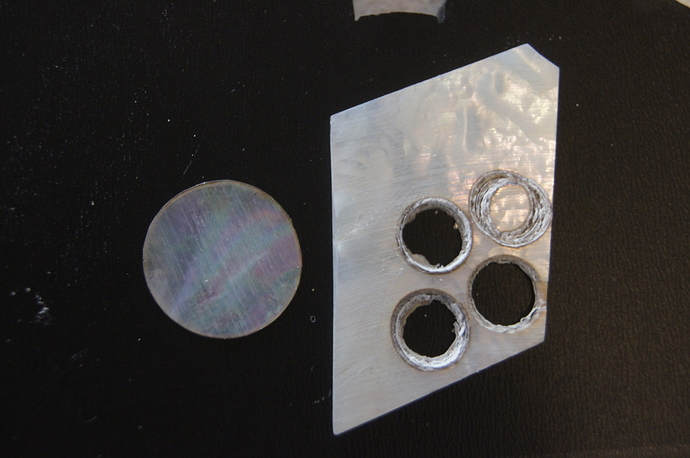 The latest cut is relatively precise with only slight discoloration on the edge and does not require a lot of power. So it could work where additional sanding (thinning) isn’t necessary. Keep in mind that because the material is translucent it is important that the inlay be placed within a solid colored backing, otherwise an unintended pattern might show through any finished work.

I believe it might still be possible to cut material in the 0.02" range with satisfactory results. That would be just thick enough to use for a fretboard application. Will try to get my hands on some.

Thanks for the info!!

Yeah, that’s a great looking cut on the thinner MOP. Thanks for testing it!

Beautiful, thank you for sharing this. This is a material that I’m very interested in experimenting with.

I also cut a larger complex pattern with points, cut outs and edges. It was decent but I used way too much power and accidentally had double lines in the source file. Burned the edges and severely ruined the cut. So won’t show that. The material is $17+ for a 5"X9" piece so don’t want to re-do it just to post.

Thanks for sharing your results! I was very interested in cutting MOP. I wonder if it’s a matter of finding just the “right” MOP. I found here that it’s apparently possible to do. But that’s all I know about it.

Edit: Found this actually showing it with an Epilog. Looks like a super-thin sheet.

Ancient technique was to place the mop veneer over metal foil - gold leaf/silver leaf - but aluminium foil might be good to try too.
John
Edit
Now I think about it, anodised aluminium might be interesting, with a suitable choice of colour.

Have you thought about using a diamond encrusted cutter?

Ancient technique was to place the mop veneer over metal foil - gold leaf/silver leaf - but aluminium foil might be good to try too.

I’ve seen beadworkers do this with transparent stones (FE - amethyst) that might otherwise be dulled by a fabric backing.

Hmm, if color shows through a bit, colored titanium or niobium may be neat as well

Is engraving working at all, or rather ugly?

Good for circles, not so good for shapes !

Er, no.
If I want to make a set of 30 identical ovals for inlaying into a set of fan sticks, the gf is going to be the only option.
I’ve cut interlacing monograms over the last thirty years, in both silver and MOP, using a jeweller’s piercing saw, and believe me, a rotating diamond was not an alternative.
Regards
John

A diamond bit on a cnc mill would not work?

Not small enough for tight corners. The saw is typically 1/32" front to back, and about 12 thou thick.
With the saw, you get to feel the resistance of the pearl against the blade, and can adjust the pressure as you go. The pearl often has weak points in it, and the great advantage of the laser will be to have ‘non-contact’ cutting.

I gotta try this out, now. I have the bits, gonna need to find some mother of pearl…

any attempt using a transfer tape prior to cutting (Amazon sells a 12"x10yd roll for $37)… I’ve used the tape on maple to avoid burn marks. also on teak which takes nearly full power to cut, which leaves hellacious burn marks without it.

similar to tape GF uses on their proof materials…

Necro’ing this thread to see if you (or anyone else) have made progress with this? I’m aware of the crushed MOP for inlay, but I’m more interested in MOP, Paua or Abalone veneer.

Just wondered if anyone else has had success with this, and perhaps has settings to share, since it’s pricey stuff to experiment with.