'My' Glowforge is Evolving!

This is just beginning to sink in.
My Pre-release glowforge engraving options just began offering a spectrum of power and density control… while I was sleeping!

That weapons grade software team just introduced some handy design elements into the user interface. How many lasers offer that degree of control? I don’t know, I’m asking. What I do know is my photo engraving ability improved by a magnitude.

I have been looking to decorate a wall in my home theater with iconic images of my favorite movies/ actors.The ability to do that to my satisfaction just landed in my lap.
Here is a picture I have wanted as a subject.

maple. I did the small one on the right just after I got the glowforge and before the power/speed update. - along side of a bigger, better Josey Wales engraving as I took this picture. Wow! 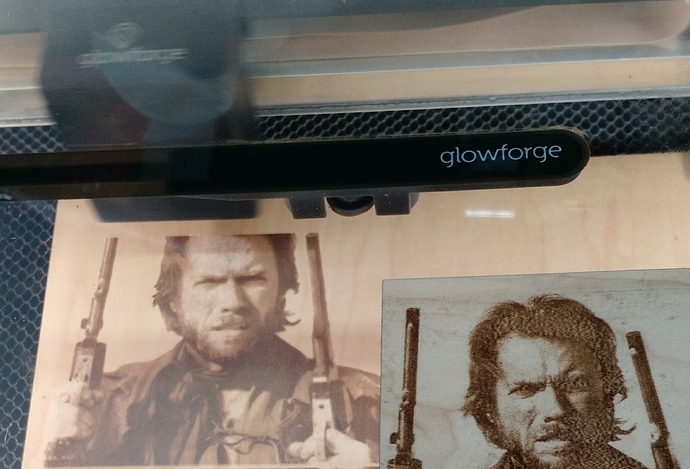 Just as I was beginning to get a handle on IPM, LPI and power, the playing field changed.
Like many here I was confused and frustrated. Were the established standards not good enough?
No. They weren’t.

Now the picture is coming into focus.(< see what I did there?) Besides pioneering new innovations to the technology and bringing it to a larger audience, The degree of control in the user interface will also be redefined. I am not surprised.

One of the biggest innovations is connectivity. This machine that hasn’t moved an inch from my shop continues to add functionality… behind my back. I never had a tool that grew up in my shop before.
Glowforge software team - You people are Rocking it.

Wow! What a difference! (Seeing those side-by-side makes me want to take another look at photo engraving.)

Wow, that’s a pretty dramatic change! The ability to make out his eyes is a huge improvement.

This is a HUGE difference! I’m looking forward to playing with those new settings, too.

Ahh yes. The classic Eastwood squint/scowl.
I dunno about the Good, but I have definitely got the Bad and Ugly covered. 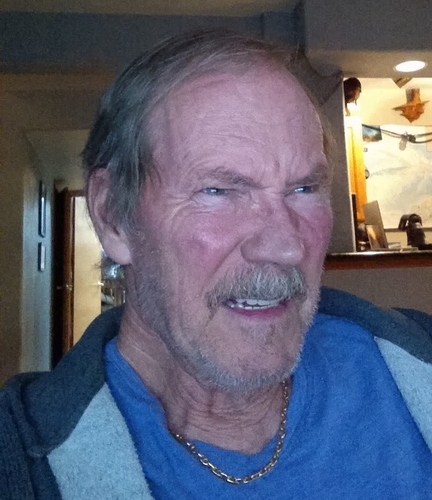 You know, if you zoom that out, you could replace your avatar and no one would be the wiser. Heh!

Yep, pretty much what I was thinking!

Looking forward to trying this. My understanding was that the functionality was there before, it’s just a change to the UI. Is it actually better at dithering or just easier to set up the way you want? I really wish someone had taken more than 3 seconds to write the release notes.

I agree a more detailed explanation of the change and its benefits would be helpful. Exploring the feature felt like a treasure hunt, (the joy of discovery as it were) and the result of the engraving excited me (if you couldn’t tell).
But then I am just a naive optimistic cheerleader, what do I know? Very little, truth be known.

Like the title of the announcement, I think it just simplifies the process.
The basic functionality was there between power and resolution, but the sliders with a preview I think are more intuitive, giving a basic idea of the effect without having to run the file to see.
I have no idea of the difference between dots and patterns on dithering, but I am anxious to explore it!

I have to say, I wasn’t interested in doing any photos … just told my husband that yesterday! BUT NOW!!! Oh yes!

Wow, that is the exact same file?

IKR? I believe the ability to achieve that has been there since the precision power update, but my perception is it got a lot easier to get that result with this interface update.

Now it is entirely possible that I just happened to nail it with my first attempts, but I contrast that with the Indiana Jones engraving I did that took me about 9 tests to get to the sweet spot.

WOW! the difference is incredible!

It is the same file, a PNG image - and I had done a little more work on it, removing the background but that’s it. I have no doubt an experienced user could have made that first attempt look a lot better than what I managed.

Now I admit the older attempt was when I knew even less than I do now (which is not saying a lot) and before the precision power update, but the fact that the machine continues to improve is what thrills me.

I want to do something similar when I finally get mine. I have a lot of scanned images of signed photos that my grandfather collected when he worked in theaters (my grandfather died before I was born). These are really old stars (looking very young) like Claudette Colbert, Cary Grant, W.C. Fields, Mae West, Sylvia Sidney, Marlene Dietrich, and my personal favorite, Daisy & Violet Hilton (who were conjoined twins).

Seeing how well your Eastwood print turned out, has me excited all over again!

How cool to have all those classic images! Almost as anxious as you are to see them.

The gain in my experience is a biggie, but the software improvements make the task easier in my perception. Particularly the visual change with the sliders. Before it was change the numbers and run the file to see what happens.