My glowforge pro is stopping mid-print and not finishing

As the subject says, I am using my glowforge pro to make some standard cuts in 1/8 inch plywood. I load up a basic cut and go ahead and press the button. Somewhere in the middle of the cut it just stops moving and cutting. The machine runs until the countdown stops, and then the fan goes off normally as if it finished but the head never moves.

As I said, its a Pro model and I am using Chrome as a browser. It is in a school and I have been using the machine successfully and often since the kickstarter delivery.

Does it happen with other files, or just that one? Duplicate exact vector cut lines on top of each other can cancel each other out, and nothing will happen.

It has happened with a few files since last week. The job time is only a few minutes for all of the jobs I have ran.

Might be a worn lid cable then…it might appear intermittent. (Support can get you a replacement with instructions on how to install it.). They’ll be able to see more from checking your logs.

Something else thats weird that may point away from that solution is that if i run the same file again, it happens at the exact place every time. Also, like I said the machine keeps running the fan as if its moving and cutting and then stops when the browser counter is over as if it finished. It seems like a software bug.

I should say that I am cutting files made in AutoCAD, saved as 2000 version dwg files, then converted to SVG in illustrator.

Best method would be to run a default file like the Gift of Good Measure, or another Glowforge supplied file and see what the behavior is.

Then, zip up one of your files and post it here so someone can take a look at it and see if something may be up with how it’s constructed.

Does it happen with all of the files? When my coolant pump failed it exhibited the same behaviour

it happens at the exact place every time.

That does tend to point to a file problem, not a machine problem…although it might still be the cable…it’s tough to tell without access to the logs.

CAD generated files can be a little bit problematic, since some programs design with short segments for their curved lines, and it’s really easy for duplication of nodes to occur. But if you’ve been using your machine since the beginning of time, you’ve probably already figured out how to work with it by now.

I think I agree with @jbmanning5 here…if you want to zip up one of the problem files someone might be able to take a look at it and see if there is anything in there that might cause a problem. If someone else can run it without issue, support would need to look at the cable or something else.

OK so the GF Ruler worked fine. I refined the CAD drawing a bit and it froze at the same place.
I am attaching a screen of what the browser shows after every instance of the problem. I am also attach two photos of failed cuts. They were the same file that I happened to rotate on the browser interface and interestingly it failed on the same piece of geometry which leads me to believe you guys are on to something with the overlapping nodes or lines. I never had problems with this before and have not changed my techniques. I am uploading my CAD DWG (autocad 2000 format) and also the SVG I made from it in Illustrator. 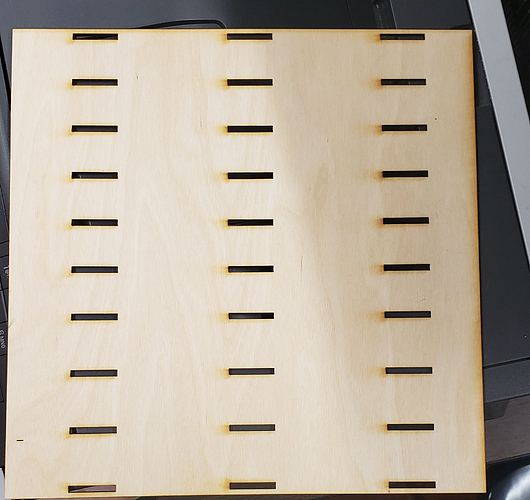 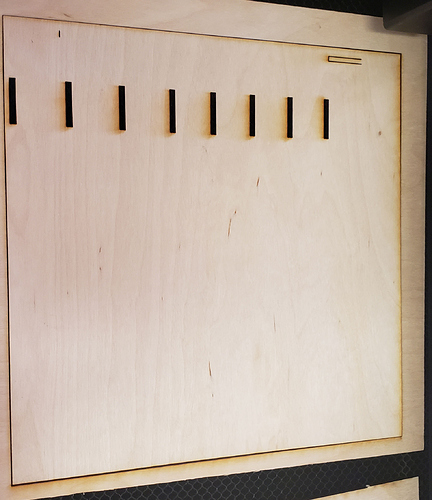 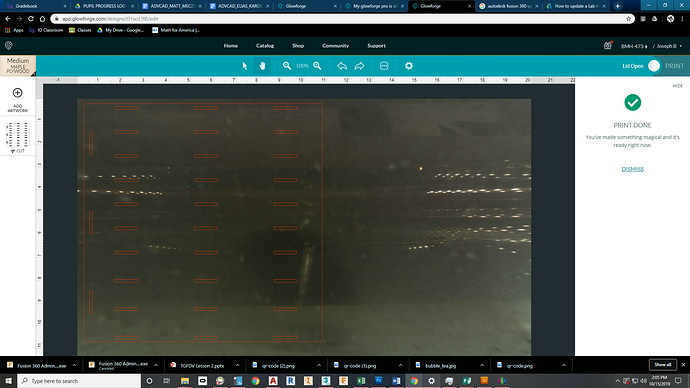 Okay, I opened your DWG file in Illustrator and converted it into an SVG and was able to cut it without a problem…you might have just had a corrupted download to the machine, or something might have been corrupted in the Illustrator file conversion.

Try printing this one and see if it comes out okay… 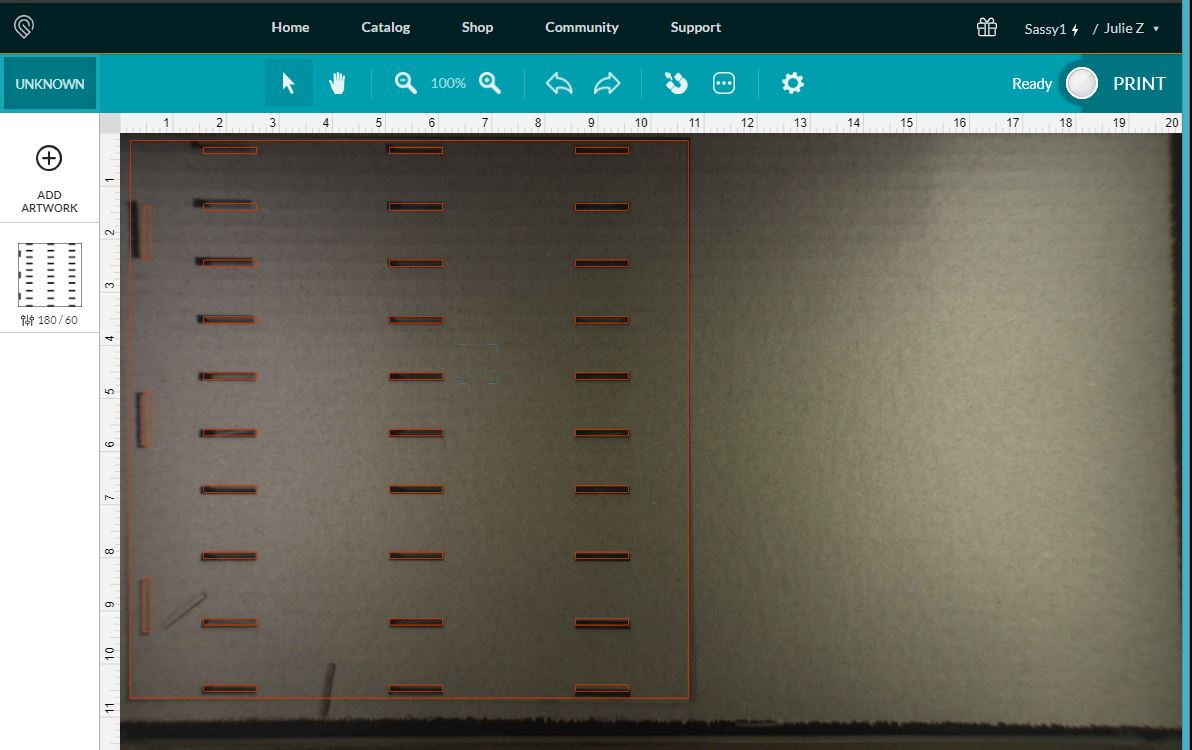 11.JPG1192×750 82.5 KB
Interestingly, after making a couple of cosmetic changes to it, I hung up my machine, so something weird definitely going on with the file contents. I need to go get my machine running again…I’ll check back to see if the new saved file worked for you. (And you might want to cut it in cardboard first to save material.)
1 Like
ben1 October 15, 2019, 11:51pm #11

Try saving your CAD drawing as a PDF directly, skipping the DWG import step. This may solve your import issues. I do this with SolidWorks and have never had a problem with any of my designs.

Thanks Jules! The file did not work. It stopped cutting after making only three of the slots.

However I tried what ben1 suggested below and saved/printed to PDF from AutoCAD and it worked fine. For now I will process things that way until I can look into this further. I don’t like workarounds; I want to understand what I may be doing that can mess things up.

ben1 that worked! I am going to use this method for now and try to look more into why this is happening. I don’t know why I was not doing this from the beginning, it is a nice method.

I’m sorry that you ran into trouble while printing one of your designs. I’m glad that the suggestions from the community got you up and printing. Thanks folks!

Thank you for providing a copy of the specific SVG you were having trouble with. I looked at the plain text version of the file and it appears to have been created with a previous version of Illustrator. If possible, would you check to see if you’re able to save your SVG file with the following settings and then let me know if the issue persists? The options window may look different and have different choices available as this screenshot is from Illustrator 23.1.1 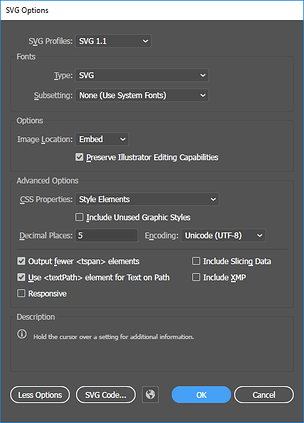 Please let me know what you find. Thank you!

OK so Ben’s suggestion on printing directly to PDF has simplified my process and and made it much easier to control from AutoCAD. Ivan, the SVG settings I used were slightly different, but not the problem. I am using an old illustrator because it does work fine and I never have to pay for it again. It is v5.5.

I thought this resolved my mid-print problem, but it did not. I did a lot of digging online on here and elsewhere. My problem is related to clip paths and what other people called overlapping nodes.

I have seemed to resolve my problem by processing my CAD files a bit more. First I run a an Overkill command to check for true overlapping lines, which there are usually none. Then I am universally applying the Join command to make all connected paths continuous pieces of Geometry, in the form of polylines. I click the objects to verify that they are “one piece” before using the PDF output settings suggested to me, which by the way are “AutoCAD PDF (General Documentation)” as a printer.

I am sad to say that I have been a GF Pro user from the beginning and never had these issues as my workflow has never deviated from AutoCAD to SVG or PDF for doing my vector cuts, and have never encountered issues regarding this problem until recently. I believe some of the backend improvements that GF is making to improve processing speed and other things have become overly sensitive to these issues. What are being perceived by the software as overlaps are not overlaps where the same lines are being cut twice over. They are line endpoints that co-exist, and that really should not be a problem for the laser software to interpret. If anything for a fraction of time the laser would burn the same point, which it was doing anyway when it makes the corner cuts. I know the corner cuts were just addressed in an update, so as I said maybe the tweaking of the backend software has brought about this ugliness.

I trust that the software will be continuously improved and I hope these bugs are addressed because software like AutoCAD has to be considered as an important source of material for the GF community and from what I read this clip-path related issue is around for other stuff as well. Looking forward to seeing improvements in speed and still waiting for the update for the glowforge marks to sync cuts. I don’t like that I do not have access to these improvements and I am a Pro owner. It is probably because I have an early manufactured machine and perhaps the fabrication was not as clean or maybe the parts used have been improved upon.

Unfortunately, it looks like your unit is experiencing an issue that we can’t resolve remotely. I’ll be in touch via email to sort out the details. I’m so sorry about the bad news.