Hello. I’ve read through lots (all?) of the mylar tip threads, and I can’t get the glowforge to make silkscreen-style engraves the same as others. I wonder if Glowforge settings have changed since those old threads–my results are way off compared to where others have it working.

I’m trying to create silkscreen-style holes in a 10 mil mylar sheet by engraving a raster image. This is my material source: https://www.stencilrevolution.com/products/blank-stencil-material

I’m able to gently etch the surface or blow through it with warping and melting but there seems to be no clean way to hit the middle.

Based on all the threads, it seems like people succeed with the glowforge power at a medium or low setting and the speed at medium or high. I can only clear through the sheet at all if I’m running on full power. And even at full speed, it warps and melts areas together versus distinctly cutting edges (pictured). 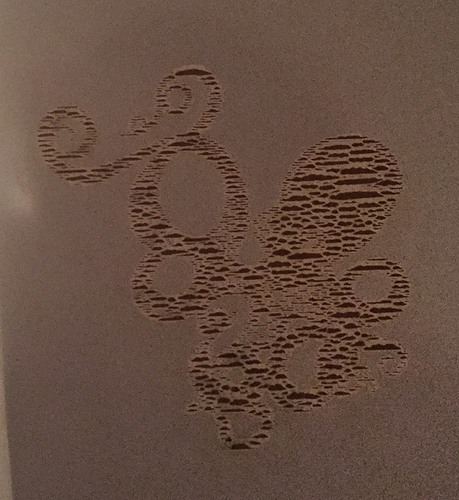 Here’s the example of it gently etching the surface at most/any settings below full power, high speed. (Phone camera flash helps show some parts and blows out others… but it looks good/correct in person.) 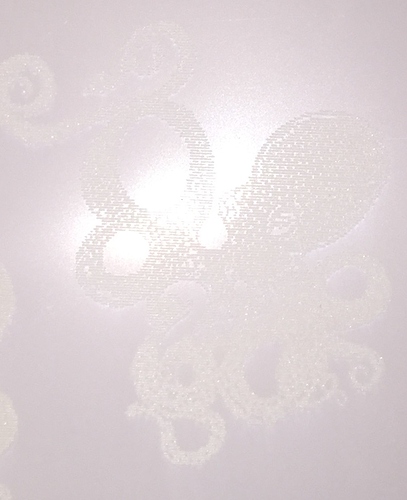 I’ve been setting the focus height at .01 inches. I tried it with and without a piece of plywood backing (changed that number after measuring the plywood). I’m set to engrave and convert to dots at 75 lines per inch.

A year or more ago, I tried this process just with a sheet of paper and got great results (an old test area pictured). 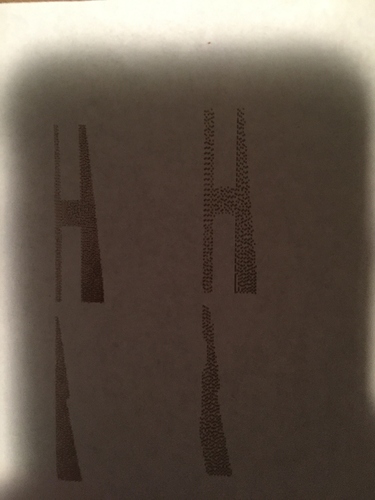 Please let me know if you have any tips or feedback on how to retry this… or could something have changed with the Glowforge in the time that has passed? I don’t use it a lot but cut proofgrade just before all of this, and that worked well/normally.

A very interesting concept! I would think that any melting plastic would be a problem but experimenting could still find what is possible. In the dot raster you can set the density range from very few dots to very dense. By sliding the marker to not use the denser area the dots will be further apart and that should help. Leaving the speed at a thousand and starting at “1” I would create a series if squares each at 1, then 5, then 10 etc power to see which case made it all the way through and use the lowest setting that would do so, I would then look at the maximum dot density to not melt and use that setting.

Each dot is fired at the full power you set so there is no difference in that but experimenting in the two areas should get you there, but paper masking might increase the power/ dot density available.

Although I’ve done plenty of stencil cutting from Mylar, I’m not aware of anybody etching it as you describe. I would think it would be too melty for that, as you are finding. Can you give us a link?

Can you give us a link?

Which leads you here among other places:

No silk, no screen Made on a Glowforge

Continuing the discussion from Create silk screens on a laser cutter?: I have been planning to employ my Glowforge to make some silkscreen patterns. This tutorial was a fantastic springboard. [IMG_8082] I didn’t use the silkscreen frame. The entire supply list for a one-color design is paint, Mylar, tape, a squeegee, and something to paint. In this case, a t-shirt. Start with this Mylar: https://www.amazon.com/Grafix-Clear-Dura-Lar-20-Inch-12-Feet/dp/B0092MJ7J2 Design a t-shirt. For my o…

Totally forgot that one. It looks like she used much thinner Mylar (2 mil vs 10 mil) so maybe that’s the key.

Totally forgot that one.

Heh, I just looked again, and you are actually in that thread back in 2017. There are just so many things on here.

I tried what is described in the links above with 5 mil mylar, and it kind of worked. My design (an anatomical heart) had a lot of detail, and some of the finer details did not come out as I had planned (the print looked like a slightly over inked stamp). However, the process did work for me.

I purchased some 2 mil mylar, but have yet to repeat the experiment using the 2 mil mylar.

I haven’t made a new screen printing design for a long long time.
The default Glowforge settings have absolutely changed in that time, particularly the dot patterns will be different.
I found the .2 mil mylar to be fantastic to work with, and haven’t tried any thicker varieties.
I would be super interested in your results as you try to nail down good settings.
I’ve intended to make new t-shirts for a while, and to post updated process… it just hasn’t got a client and so hasn’t been a priority.
I should really do some more “for me” projects…

Hi All,
I wasn’t planning to spend a lot of time on this today but ran a fairly quick test and thought I’d update. Thanks for your thought so far.

Maybe the thickness is important, yes. I thought “it’s only 10 mil” but I guess it’s still 5 times thicker than threads where others have had success.

Some of the old threads mentioned covering the surface as part of the engrave… so I tried it with blue tape. I don’t have time to run more consecutive tests now, but I saw improved results (while still using surprisingly high settings).

Pictured, clockwise from upper left:
1: old bad test, I think this was attempting multiple passes and I canceled it part way through the third pass because of too much melting/warping.
2: Full power (!) 650 speed. Some parts melted together but less than other tests
3: Full power 950 speed. Doesn’t clear though the surface everywhere, but clean where it does.
4: 50 power full speed. Easily clears the tape surface cleanly, doesn’t make it through the mylar. 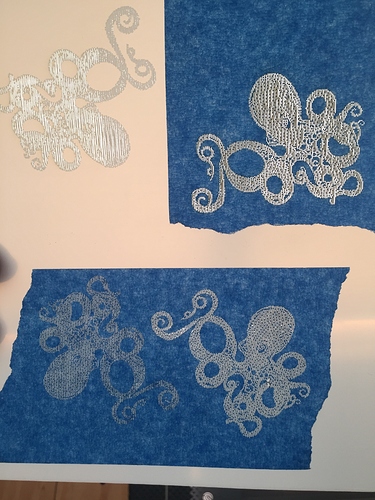 I’m a little concerned that I won’t be able to clear the tape off the lattice cuts without scraping and damaging the mylar, but I’ll have to try that in the future. I guess I could put a piece of paper over it instead.

I’ll also try to source the 2 mil stuff linked in other threads.

Any thoughts on the tape improving the results of this? (Though it still takes full power, hmm.)

5x thickness is a massive difference.

Scaling it up, It’s like 1/8” plywood versus 1.125” plywood. I know that’s not an entirely fair comparison, but it does illustrate the difference in a more human scale.

While you may work this out to be better through some clever technique, I suspect that the physics of 2mil vs 10mil will make a much greater difference than anything else you can do here.

clear the tape off the lattice cuts without scraping and damaging the mylar,

I would try to find what works without the masking if it will do that, but I would test the Mylar with the thick hand sanitizer that it is not damaged by it, If it does not damage the Mylar, then using it on the Mylar+Tape it will dissolve the adhesive on the tape and they will come right off.

I can’t see how masking would add anything in this circumstance… I think it would be dreadful to try to weed that.

masking would add anything

The masking will hold everything in place while it is hot enough to melt and also narrow the blast area in each dot as it would absorb the extraneous heating so making each dot smaller and less melty,

As for weeding ; I use the sanitizer on everything it will not damage and the adhesive dissolves so weeding is not an issue.