Navigation to the Glowforge app and others

I’m curious why there are not navigation links to the Glowforge app, Store and Catalog at the top of the forum page?

My guess is that they are hamstrung either by discourse itself or cross-platform priorities. If they drew a line in the sand and said “tablets and phone users need to pony up for a proper computer” they’d have a lot more freedom for design to fit a desktop browser.

Oh, and they also had to build a laser. UI tweaks will probably come later as people like us say things like “you know, it sure would be nice to have links to the shop, app and catalog at the top of the forum”…

This idea is particularly good for them as making it easier to find the store = more money for GF.

I was on my way over to the shop when I wrote this, so yah.

It could also be that not all forum members have access to those resources. But that’s weak.

I’m really hoping they step on the gas, and start delivering tweaks and features. They should be spending less time at the factory now, and more on the software I would think.

I agree and in general I have found the lack of cross links confusing. I have app.glowforge.com memorized, but it’s not clear to me how anyone would find it if they didn’t.

The Forum is open to the public (non-owners), but the other links are not. Rather than have dead (to the public) links in the forum, they have a perfectly good link to the forum from the app. Also, the forum is hosted externally by a 3rd party – GF doesn’t write that code.

Good points, but it would be no big deal to include members only links that the public can see, they’d have to authenticate and that would be that. It would be convenient for us, the people what pay their bills, so…

I personally don’t mind if gawkers see a link they can’t get to, and if they know there’s a store and catalog it would seem to be free advertising for the great ecosystem that GF provides for its owners, yeah?

Agreed, the link would not be dead to non owners, it would simply ask them credentials. If they don’t have them, tough noogies.

You are absolutely right, GF could spend development time writing custom CSS to be added to the Discourse instance.

My personal preference, and of course YMMV, is that they spend dev hours on higher-priority user stories such as improving placement accuracy, implementing continuous auto-focus, etc. After all, bookmarking sites is as easy as pressing CTRL-D.

I keep a block of GF bookmarks in my Bookmark Bar synced across my browsers: 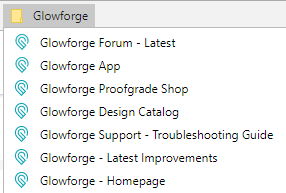 Here’s an import file that should work in most modern browsers:
GF_bookmark_import.zip (2.1 KB)

True that. Most of the tweaks are low hanging fruit that should have been in place on day one, after 2 years of development and beta testing.

I’d love the ability to disable a cut or engrave in the UI without loosing settings when you reactivate it, as an example of “Why on earth is this not a thing?”

The links are “dead” when you look at it from the perspective of site rankings. If the links go to authentication pages, then the page that refers them to those links gets lower ranks… well, at least from my stagnant pre-2010 experience on the issue.

Most of the tweaks are low hanging fruit that should have been in place on day one, after 2 years of development and beta testing.

Yeah, we’re just not going to agree on this.

I’d love the ability to disable a cut or engrave in the UI without loosing settings when you reactivate it, as an example of “Why on earth is this not a thing?”

This is a good example – for each user that wants it that way, there is another that would lament that the GF is inserting old settings when they want to use new ones.

As I said, we’re just not going to agree or convince each other on this one. Now think of this from GF’s POV…

Have a great day!

Ehhhh regarding the “Ignore” option…

Yeah if I have 15 operations in a file, I would LOVE if they could be ignored without the GF app forgetting the settings, because chances are I spent some time setting them all up as the first step after importing.

What. You. Said. This is so irritating.

The ability to turn off an operation without loosing settings is possibly my number one. Right up there with storing non-proofgrade settings.

navigation links to the Glowforge app, Store and Catalog at the top of the forum page

I recall making that suggestion a few months ago. But I forget how it was responded to.

Ditto, man. Those would make every day with the machine so much nicer.

I am worried we’ll never see either since material handling is so highly focused on Proofgrade and the provided settings, and these features benefit users of manual settings.

Maybe some ambitious hobbyist will develop a Chrome plugin for us.

Well, when it all comes down to it, and we write our reviews/blogs and give opinions to prospective buyers, we can give our feedback there, if they don’t listen to us here.

As I remember it, ease of use was a selling point.

Maybe some ambitious hobbyist will develop a Chrome plugin for us.

Someone wrote a plug-in to save files & settings and a week later the GF software update with auto-save was released.

Thanks for the suggestion! I’ll make sure the team gets it.