I really (really) like working with finger joints. They’re such an elegant solution, and I’ve used them for many boxes and trays and even false doors (I’ll be posting about this in the coming days).

But I have a real hard time making these myself on highly custom files. I’ve read everything I can find on this site posted, and just can’t seem to come up with a mental model that helps me grasp how to do these with the correct kerf adjustments and all. I’m an expert in Illustrator and a beginner in Fusion, but I’ve created something I’d like to make with box joints. Below is a screenshot and I don’t mind sharing the actual file.

It’s basically a floating shelf with a false back to allow cables to be passed out behind and up through the top without being seen.

Is there a non finger joint method that’s better I haven’t thought of? 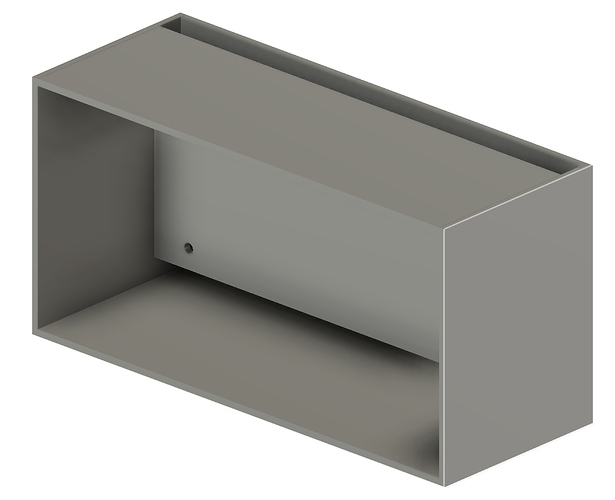 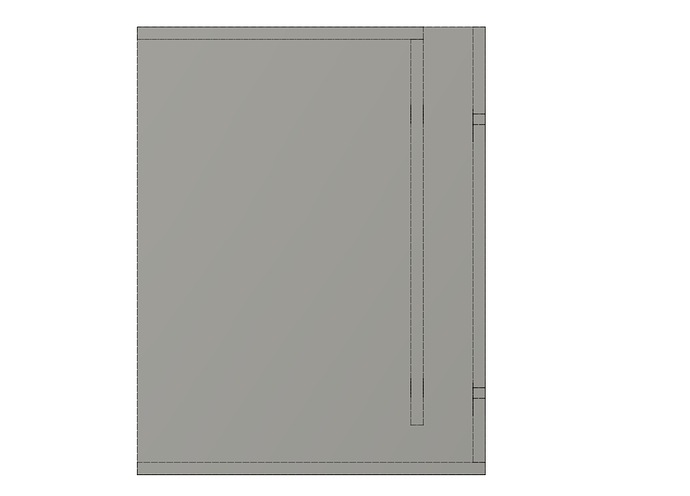 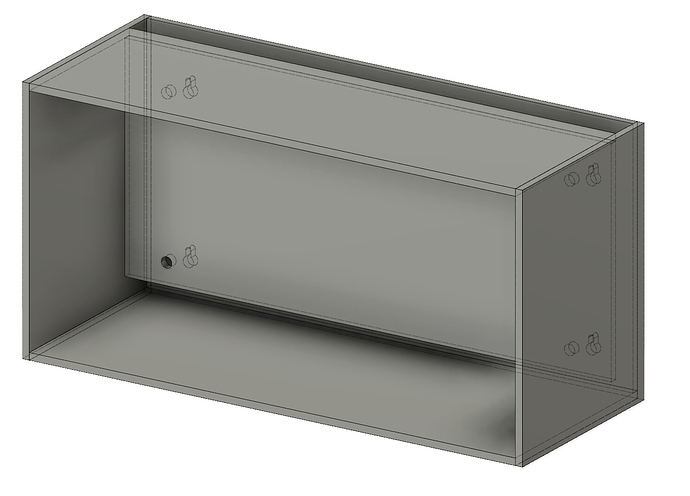 Here’s how I do them:

My method actually focuses on creating the holes, not the fingers. It requires that you kind of think of the process inside-out, but it’s the only way I could create finger joints that actually work. This is the sequence of steps for creating finger joints along one corner of a small box. Sometimes it can be a little difficult to visualize how three rows of finger joints will fit together at a corner. This is what Amazon boxes are for – cut out some trial parts and put them together to make su…

If you’re okay using finger joints on it, a couple of the guys here wrote a tab generator plugin for Fusion that works a treat…otherwise it would take a little longer to create the tabs and kerf adjust it in Illustrator.

TabGen: A new add-in for Fusion 360 Everything Else

If you’re using Fusion 360 (and, hopefully, the excellent Glowforge Colorific Post Processor) to design things with simple tabbed finger-joints you know how tedious adding finger-joints to your model can be. To make the job easier, I wrote an add-in for Fusion 360 called TabGen. Basically, TabGen lets you select one or more faces that form the edges of the material into which the finger-joints are to be cut and adjust parameters like tab length. Like this: [ss3] And then click Ok to create t…

Rabbits? Suppose etching out the rabbit (channel) as a router would do could work.

Yes I actually considered this and realized I’d need to test a few runs for depth and hope the wood is consistent, I know generally with rabbits you need at least a third of the thickness.

Yes I’ve been on that topic since around when it was created, I think we even went back and forth in that post though I could be wrong! I have the latest version installed and it doesn’t seem to work the way I’d intuit. I seem to be having troubling wrapping my head around how to get it to work with the design I have, especially the inner wall, I’d need fingers on the piece and holes in the sides, etc.

Quite possible…I’ve slept a few times since then.

Here’s a quickie writeup on doing it in Illustrator…sometimes it’s actually easier to mentally visualize it in 2D. (Lots of rotating and aligning, but then you can kerf adjust the whole thing at once.)

Shelf Design Everything Else

Pretty easy in Illustrator actually, if you don’t want to get too fancy for something like kerf adjusting at first. (I basically just do a lot of laying out, aligning, copying and rotating before joining parts.) For a simple tray for instance, I’ll lay out the parts as they are going to be assembled, with everything aligned top bottom and center. In between each of the parts, I’ll insert two small rectangles for the tabs, exactly the width of the material thickness. (So usually 3.4 mm for me…

I plan to test it, but I’d like to doublecheck how to review the parameters entered (like kerf) and don’t see a way to. I may actually just start it all over again so I can verify everything is correct.

Also it’s leaving a sliver of a tab at the end of the run, I’m assuming this is because my design is to-the-inch and my tabs are set to 1/4 inch with 0.01 kerf? So the kerf adjustment is summing at the end in the form of a tab? Or am I wrong? You can see it in the top left of the last pic, the side panel. 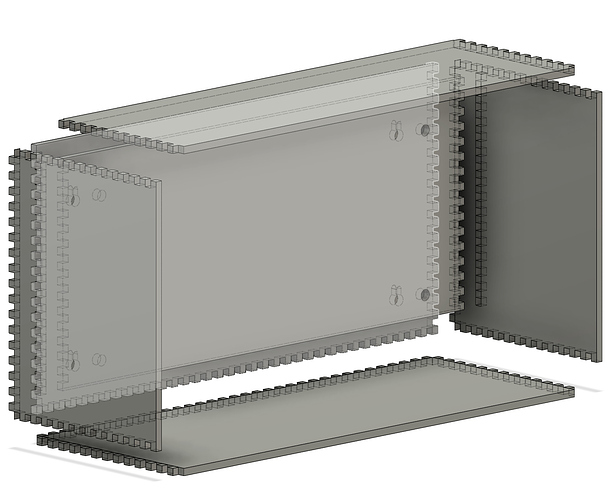 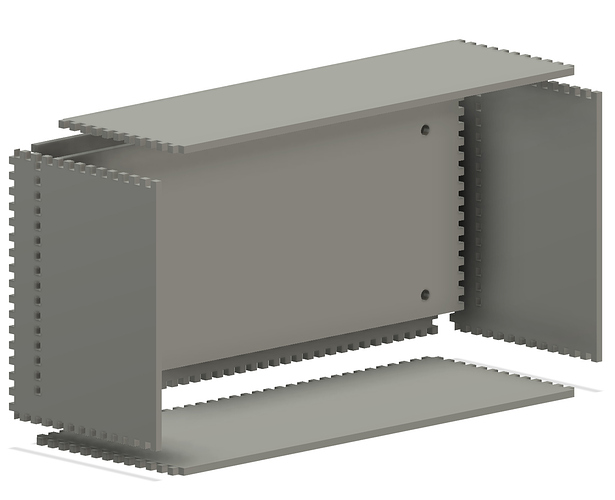 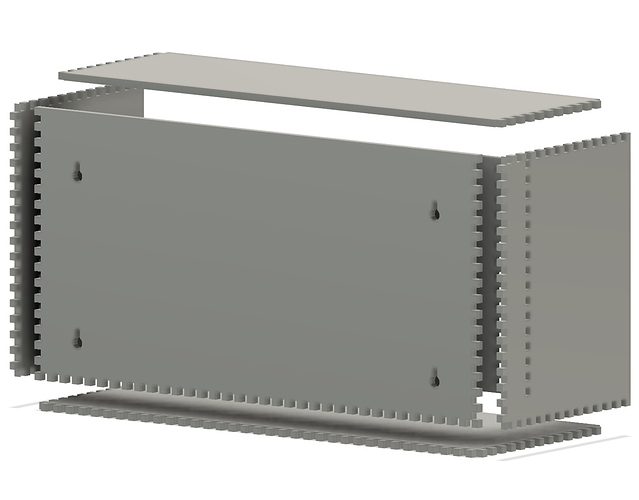 I’m glad it’s useful. You should be able to manually account for what you’re trying to do, but it’s probably not intuitive. I’ll try to recreate your box when I have time over the next couple of days to see if I can give you better instructions. This is a slightly different scenario than I’ve ever tested. Unfortunately, I’m a bit busy at the moment to try testing it sooner.

Thank you Jules! I fixed it a bit, Fusion is actually pretty intuitive if one has any experience with parametric modeling. The Combine feature, used a cut tool, is incredibly powerful.

That’s exactly why I wanted to do something like this with finger joints, to test the complicated scenarios. It looks like it’s going to work fine.

I have been working in Inkscape but have found that having a standard set of fingers that can be applied to any model can be very useful and quick with the additional interest that all the scraps also match and can be made into many useful objects.

Exactly. Once you create a strip of tabs that work for a particular material, you can copy/import that into any design.