We bought a SodaStream last week. Although I told my husband that the “plain” water was always behind the “carbonated” bottle, he asked me to make some labels. So Glowforge to the rescue! I used some elastic string so they go on and off very easily. Since SodaStream states cold water carbonates better, we just keep both in the fridge. Today, however, we used it all, even after carbonating the second bottle, so I just flipped the carbonated label over. If I would’ve thought about it when I made them, I would have flipped them over and engraved the other sides when I made them. Oh well, next time! 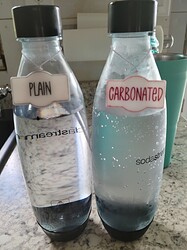 And today I made this. 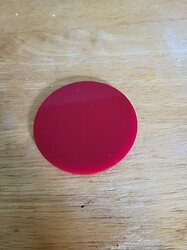 What’s so special about an acrylic circle? Well it goes to this. 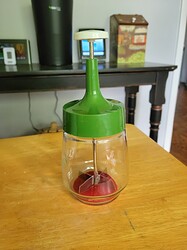 So I can do this! 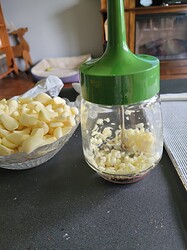 I have had this chopper for probably at least 30 years, if not more. Seems I’ve had it almost as long as I’ve been married, which is 49 years. The little disk that used to be in it broke years ago so I hadn’t used it for years. When I got my GF last year, I made a little silicone disk for it, which was okay, but not great. This week, since I’m working on mincing 100 head of garlic to dehydrate, I wanted to use my chopper. The oil from the garlic made the silicone slip around, so I was constantly having to adjust it. Today my husband said that I should just make an acrylic disk, as that’s what used to be in there. I told him I didn’t know if I could get it to fit inside. He said to just make it slightly larger than the silicone one. I did a test piece out of draftboard and it fit in the bottom perfectly! Which I should’ve realized it would, as the bottom is smaller than the top opening, duh!!

So I made the acrylic one and it works beautifully! Made my chopping so much faster as it stays seated inside and fits perfectly within the little indention in the bottom, so it’s more flat with the chopping surface, but it also slips out with all the garlic so I can scrape it off easily and put it back in for the next batch.

I just love being able to use the GF for such practical cuts. I just wish my husband would’ve suggested it a couple days ago - I’ve been chopping garlic for the past week! And still have a few more days to go, but at least it’ll be a lot faster now!

I love that you made the disk out of bright red - I’d likely have done clear, and then would have been annoyed that I couldn’t tell from a distance whether I’d remembered to put it back in!

Thanks! And that is exactly why I did the disk in red! I definitely have plenty of clear to use, but I also had some pg 6" red that I had used for other things, and this circle fit in a little space that was left. And since I also love the color red…and my dishcloths are red, and I have red on my Ikea towels… red it is!

I have had this chopper for probably at least 30 year

I have one just like this…all our married life probably…which is 53 years. I think my mom had one, too. Love practical ideas like you made for this…and wow…so simple.

I love that you used the Glowforge to give your chopper new life!

I’m also impressed that you are dehydrating 100 head of garlic. What process do you use to dehydrate? Is is for long-term storage, or do you use the dehydrated garlic regularly?

I have gone through several electric ones. All had a key weakness that made it break when pushed just a bit. I could see that a simple cad choice had made the last one a lot weaker and had in the back of my mind to make my own with my first working 3d printer. Another had a soldered-in resister that could easily have been a circuit breaker or a fuse, so that one died young. The last is really small and has so many “safety” glitches that it takes more work than that chopper. The one I recall of my parent’s looked exactly like that so the design has been around at least 70 years and still working, though I think the disk was hard maple.

I bought a big thing of dehydrated chopped garlic that turned into a solid mass, so it is almost gone now as roasted dehydrated garlic.

I have had this same chopper for over 30 years and love it. I have always wondered what I would do if I lost the little disk, now I know! Thanks for the idea!

@LauraZM, we grow our own garlic, so we dehydrate it for long term storage in a Cosori dehydrator. One harvest usually lasts us all year, just a little over. After dehydrating it, I just store it in jars in our storeroom, which is always kept cool. I then take some out and grind it into garlic powder. I’ve tried to make “granulated” garlic, but the grinder we had at the time didn’t work well. We have a new grinder now and I’ve still just made powder, although I am going to play with the settings and see if I can’t get it coarser. I’ve just been leaving it on the setting for our coffee beans we grind every day. Although I do love fresh garlic in recipes, knowing that our dried garlic is organic and stored with no preservatives, I do love the ease of using the dried. It’s just the process that takes so long! I did learn to wear Nitrile gloves when I handle this much garlic though, as otherwise it almost feels like chemical burns on my hands! Last year I also made some roasted garlic oil, which works well also. But I preferred the dried.

@rbtdanforth, I thought ours had the wooden disk as well, although my husband says it was acrylic. But if it would have been acrylic, I think I would still have the original disk. I’m pretty sure it was also wood, and it had split down the middle. I do shake our jars about once a week to keep it from any chance of clumping. With my powdered garlic in my spice drawer, I put in some food-grade desiccant packets that come in some of our herbals, which seems to work well.

Some great solves with your Glowforge!

Nice job on those cuts! If you find that the acrylic doesn’t hold up over time due to its brittleness, you could make another disk out of Delrin (acetal). That’s what I made the liner pieces out of to go in the bottom of my dishwasher silverware basket (we like to put knives in pointy side down). It’s been 3 years and no sign of damage to them so far.

love me some practical cuts.

Good idea. I’ll have to keep that in mind. Thanks!

I love that you made the disk out of bright red

Probably a good thing to dye the wooden cutting board bright red as well, less freak out by the other folk in the room.