Needed : an interface from Glowforge to Filter

Well, My Glowforge pro is one week since the Golden Email and I have a problem that is beyond support. I purchased this filter and discovered that the black hole in the side is actually 10 inches across and will need to connect to the 4-inch Glowforge hose.

I made a drawing in Inkscape of how it could both not take too much room and centrifuge out anything big enough to be affected by the centrifuge, 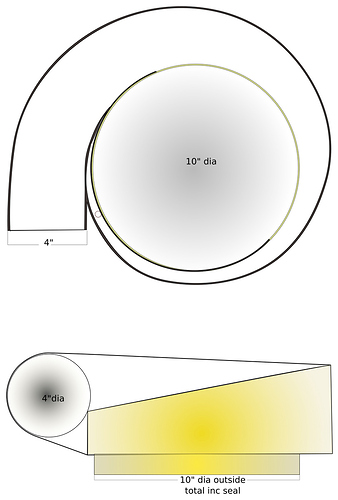 and am asking if anyone can make this by the time the Glowforge gets here. the design is also freely available to anyone who also got one of those blue monsters.

I’m not a very technical person so I don’t really understand the drawings, and I’m sure your design is much more elegant, but in case you can’t get someone to make it in time, you could just get a reducer from a home improvement store. Or, well, 2 reducers probably.

It is a cool idea but I think you may be over complicating your design. You’re going from small to big so your worries about a smooth transition are not as big as if it were the other way around. Also centrifuges work best if you’re tightening the air channel and have a pretty fast flow rate with particles that are fairly large. I’m not sure how effective your design would be at removing much material, and it’d need somewhere to go in any case.

Meanwhile @erin beat me to it, a duct reducer would probably be my go-to as well. There are probably less expensive options but here’s one: 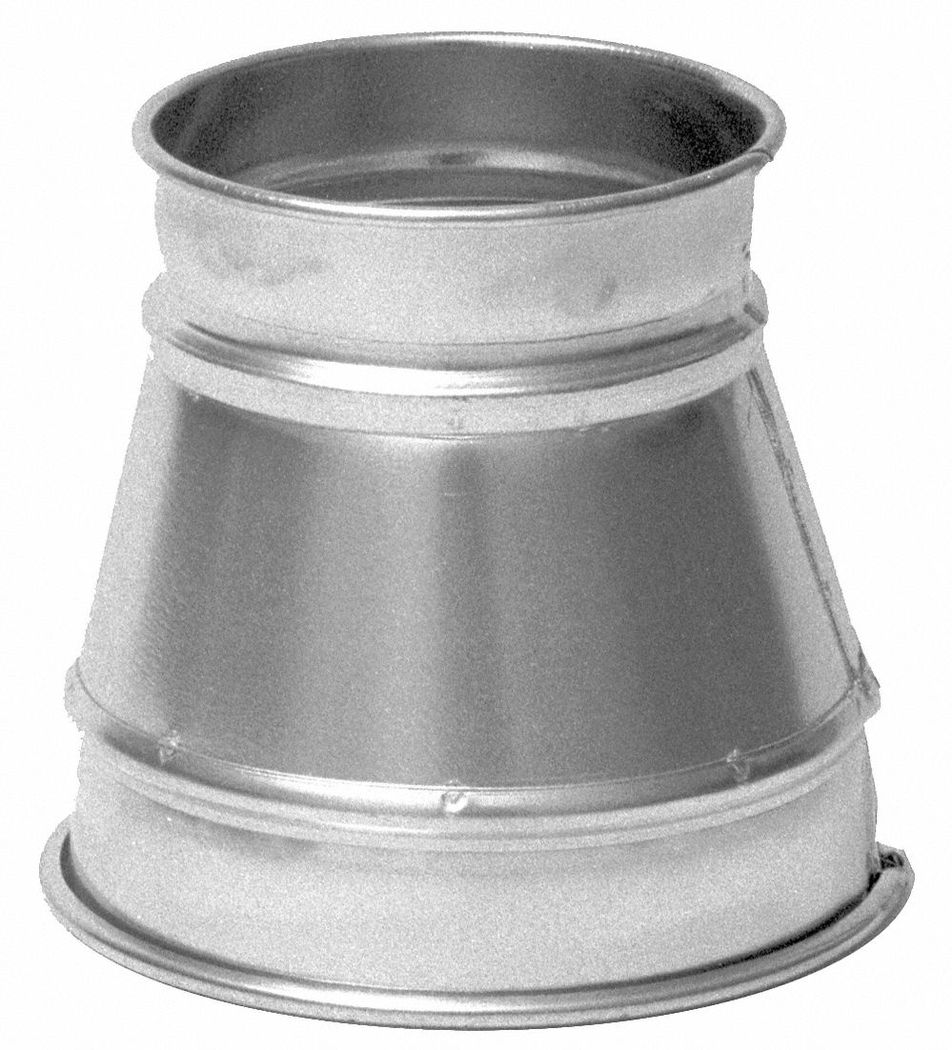 You may find something smaller if you hunt but this may be the simplest option.

Two or three in line reducers would be a minimum of two feet long and probably closer to three. This spiral design would be six inches beyond the filter, and have the additional advantage of separating out any larger bits before it even got to the filter…

There are probably less expensive options but here’s one:

Sorry as I was on a tablet I did not see your post. there is a small hole in the side that would empty stuff trapped when the Glowforge was finished cutting but my expectation is cubic inches and not cubic feet as would be with a saw.

So to expand on what I meant: Cyclone designs are rarely that compact for a reason, I’m afraid. You can buy inexpensive cyclone units off banggood, they require a tightening spiral to get some serious flow rate and then someplace for debris to drop into.

@shop has some experience with filters, maybe he’d care to weigh in?

Thank you for your thoughts on this, I did look at traditional designs and all I could find were for two inch intake and exhaust that emptied into a five gallon bucket and three feet tall plus the bucket at best. Those would be nice for something like a router where the result would be mostly chips and it would probably take something like that when such chips are most of the volume processed.

My design would overflow instantly if processing a saw or router volume but it would be a small part of a laser output . Likewise a sudden change in direction like an elbow brings a lot of turbulence and a drop in volume where I think the centrifugal shape would not have the same effect. All these thoughts have occurred in the month or so since discovering I needed it.

Yeah. The low profile aspect of it is really nice. You might look at Matthias Wandel on YouTube, he’s a maker who sort of specializes in making his own tools. He’s done a few videos on filtration solutions, might give you ideas.

do you have a 3d printer? I would just print a coupler, I don’t understand why you need a centrifuge as there is no chips, only light dust and smoke/fumes. the airflow will increase anyways when going up to 10" and certainly it will be better than a hose going out a window vent.
only issue is t hat for a 10" piece you need a 254mm bed, which makes it a bit bigger than many standard 200mm -250mm printers…

@shop has some experience with filters, maybe he’d care to weigh in?

my experience is, basically, “which industrial filter do you recommend for the universal pls-6? we’ll take that one.” it works great, but it’s $5000.

I started out thinking 3d printer but I don’t have one and someplace like Shapeways would cost more than the Glowforge. As a final last resort the Glowforge itself can make a ten inch disk with a four inch hole but that would be pretty unsatisfactory.

Yes this one was a bit pricy, but not that much. At 500cfm max with HEPA and charcoal filters it was a bargain by comparison, and for anything else I looked at. There is just this one smalll 10" problem…

well, the one i’m talking about is an industrial filter for an industrial laser. it’s 4’ high and a little over 2’ square. and it sucks every bit of odor out of everything. a beast.

, i can let it run until i’m ready to open the door, just to be safe. still can’t figure out why we can’t either have a software control so we can have more fan run time or at least another 10-15 seconds of run time for the fan after the job completes.

well, where do you live?

This one too is a beast. I imagine it being brought in when someone has a fire in s room that does not consume the whole house. At a max of 500 cfm it could clear a whole house pretty fast. 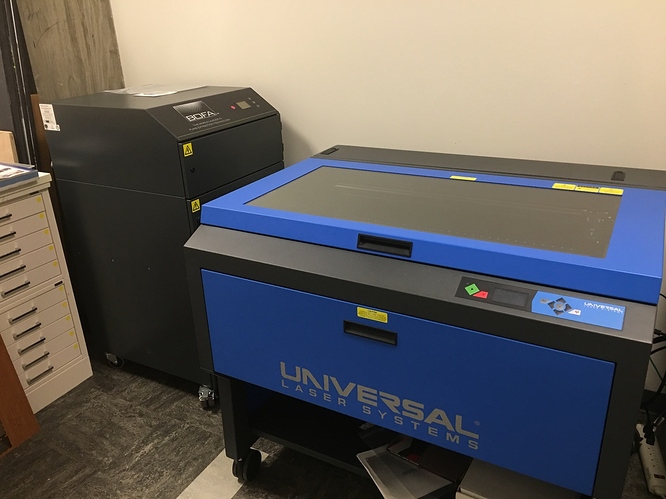 It actually is designed to sit upright or on its side and yup, it would be about three of them high so will be needing replacement filters much sooner but then four of them would do an amazing 2000 cfm and still cost about half. However the Glowforge seems to be a smaller beast than your Universal so may be sufficient

I saw this before the first response and have been thinking about it ever since; my thoughts are:
a) It’s probably overkill to worry about larger particles escaping through the GF fan unit.
b) You could more easily build your centrifugal reducing spiral inside a box than without a box, and it won’t impact the low profile nature of your design.

btw, How loud is your fan/filter?

A ten inch I’d octagonal box with one face made to fit the 4-inch tube and a short bit of 10 inch tube or similar, the end of the aluminum hose could even be made square instead of round though it would restrict flow there somewhat it would be easier to build.

Even as I type this a simpler design is forming if I abandon the idea of collecting dust and think of squaring off the end of the hose as it would only be the last few inches and pi x4 divided by 4 is a square pi so three and some inches on a side plus whatever stretching I can accomplish.