My daughter wanted an iPhone, so I printed her one, 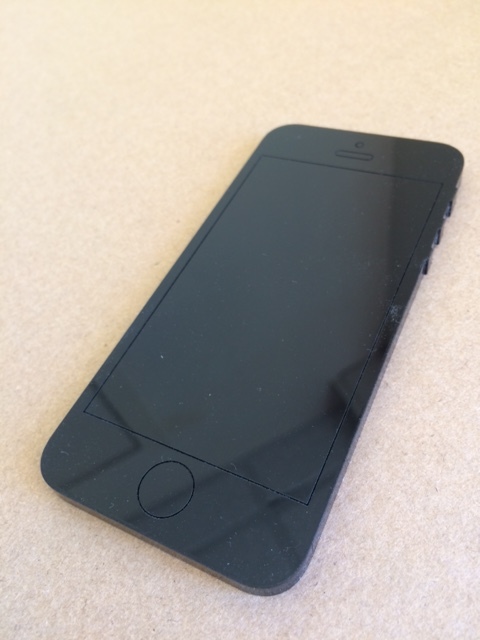 I accutaly made it for my one year old

Got the 3D model off of GrabCAD and then just picked the lines I wanted.

The file isn’t the cleanest, I have been having trouble exporting them from Rhino

Ha! Ha! Great idea! Having a reflective surface would help…for a while!

Heck, I need to do this for one of my teenagers. I’ll provide a phone and service, you can have the smartphone when you buy it. LOL. I know, by some standards, I’m a terrible parent.

The file isn’t the cleanest, I have been having trouble exporting them from Rhino

Yeah, something really broke up that file into a bunch of little lines. Can you link to the original file from GrabCAD?

Are you using Rhino 6 WIP, 5, or something else? It looks like the file you posted was created by Inkscape, what filetype did you export from Rhino?

Here is the link to the Grabcad
https://grabcad.com/library/iphone-5-precise-detailed-model-for-case-designers

I am using Rhino 5 on windows, I had been using export .DXF as lines and arcs but it kept doing weird things like leaving out lines and changing the size of arcs so I exported as just lines and then imported to inkscape to save as a svg.

Cute, but that’s awfully young to be getting started on an iphone habit!

I think he has a crush on Siri, he will learn to hate her!

Wow, I honestly thought that was a real iPhone. Great decoy!

That’s both awesome and cute!

Installed WIP 6 and see there is an svg export option, but didn’t have any luck with it loading in to the GF app. Have you?

I don’t have a Glowforge yet, so I can’t try them. I have exported a few SVGs. One thing that seems screwy (to me) is that the resolution/DPI setting seems to effect the quality of the vector paths. I set it to 1000 and that has made the files look good in Illustrator.

Hmmm. I’ll try that, didn’t think that would have anything to do with it:-)

If it’s simply not working, it prolly won’t help. Does the SVG open in other programs? If you resave it, will the resaved file open in the GFUI?

I had been using export .DXF as lines and arcs but it kept doing weird things like leaving out lines and changing the size of arcs

If you tweak the settings the exported DXFs will open fine in Inkscape.

… spoke too soon. With more testing I see that even with tweaked settings the DXFs only open mostly fine in Inkscape. On the plus side they seem to be completely fine when opened in Rhino, Fusion 360, and SolidWorks.

The picture almost fooled me! Hopefully this keeps drool off your actual iPhone