So this was a fun test… I want to run an LED strip light in one of my next projects. But the criteria of what I want is pretty specific -

So, here’s what I came up with.

I use WIZ lights in my home as I like the simple app, I find their quality to be pretty good and consistent, and the app seems to connect to the lights and onboard them to my network easily and quickly every time. No small feat. So, I chose the 3.3 foot strip at it should be sufficiently bright and an adequate length. 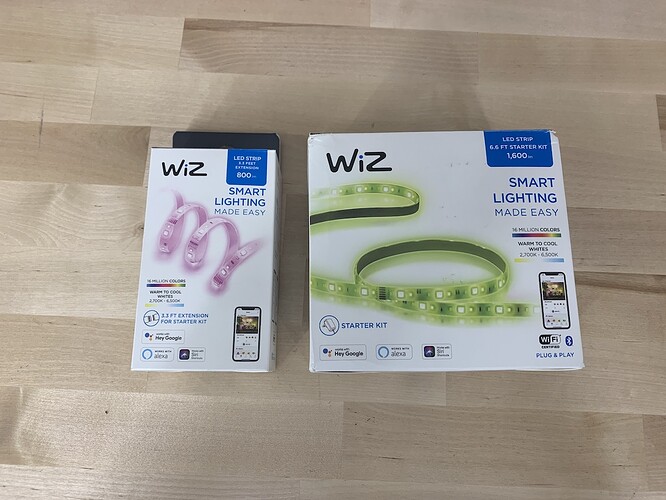 Oh, and I also chose WIZ for this project as their controller uses a wall wart, of course, and the output is 12v dc. So, what batteries do I have on hand that are 12v, easily / quickly rechargeable and easy to adapt to a power plug with an adapter? 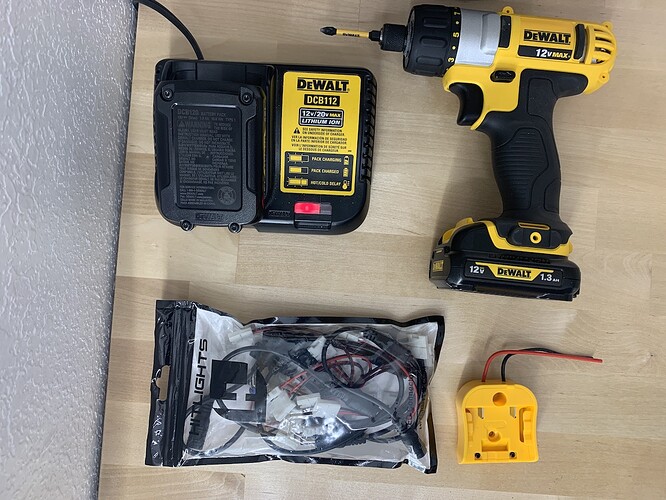 Go with what you know. So I decided to also try this “High precision Watt Meter and Power Analyzer”. Just to get an idea of the volts and watts being used, and to estimate the runtime. I hooked up the analyzer to the freshly charged battery and confirmed, 12.12 volts. 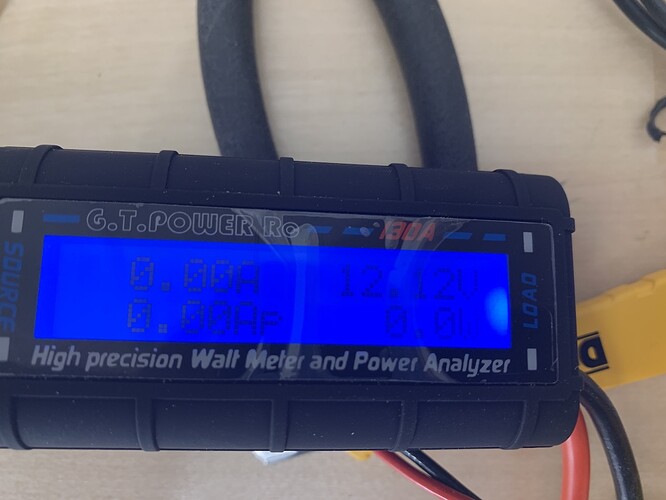 Next up, connect everything else - Battery to watt meter, meter to light controller and sync to the WIZ App. The default light output level is ‘Wam White/Full brightness’. It works, but what’s the watts? 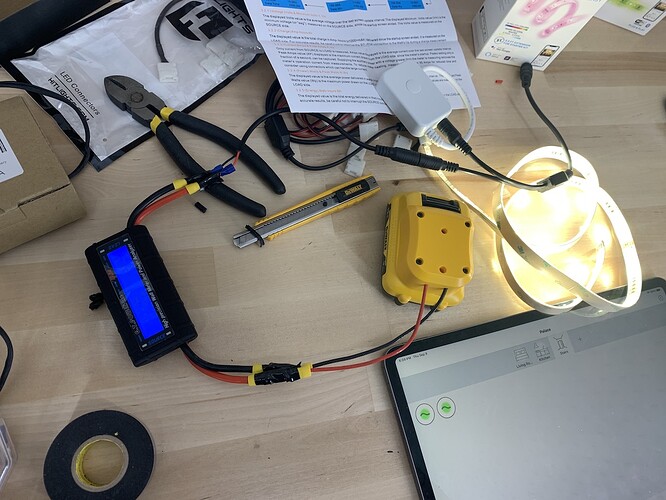 I did all the math, of course, based on the rated power output of the wall wart and the maximum claimed strips you can use on one kit. All very boring, to most people. So here’s the pic. With a light output of Warm White, full brightness, the meter says it was using 3.2watts. 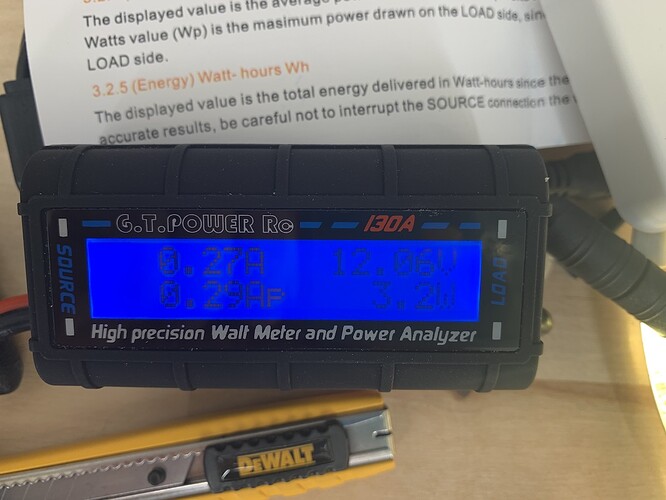 Ok, so do the math - 3.2w/12v=.27ah divided into the 1.3Ah rating on the battery, and it should run about 4.8 hours. Short of my 8-12hour goal, but, I don’t want Warm White and don’t need full brightness. So, lets try some other colored light. Green at half brightness = 0 watts? Seriously… 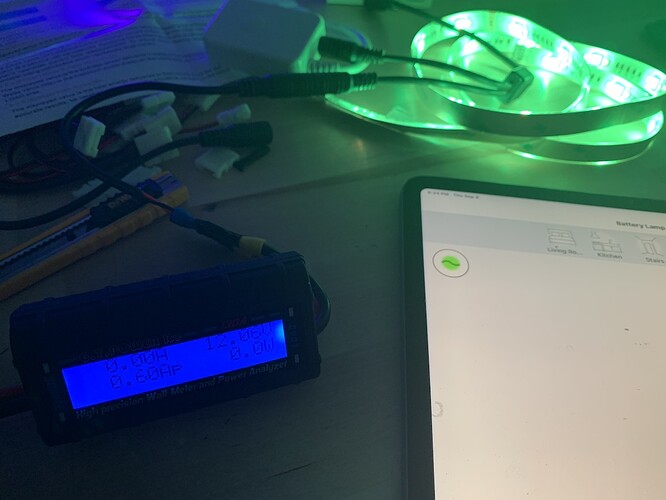 Ya, the meter is clearly having some difficulties, probably with the power factor of the lights. But that’s a whole different discussion, and borefest… So how about red at half brightness? 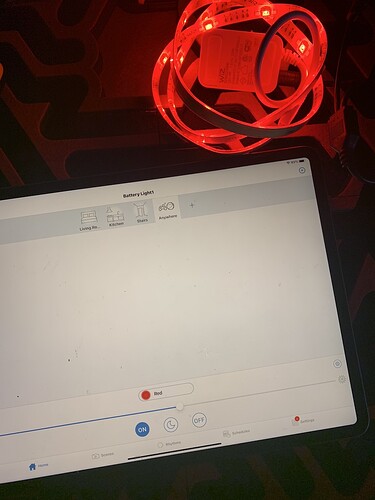 Seriously, .2watts. Ya, that’s not right either. 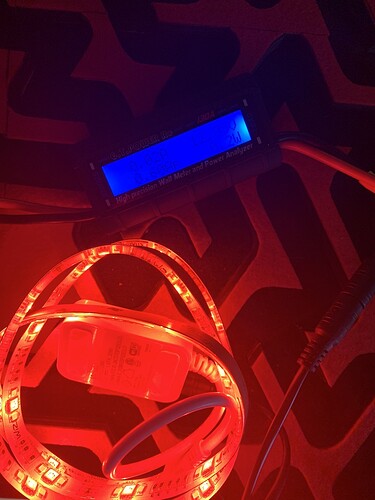 Ok, scratch that idea. I’m just guessing, based on the perceived brightness, that the strip is probably using 1-2watts, and the electronics are minimal. So let’s just try this thing. I’ll do the color and brightness I think I want and just let it run on a stopwatch. Here we go, Deep Dive (Blue) and 50% brightness. 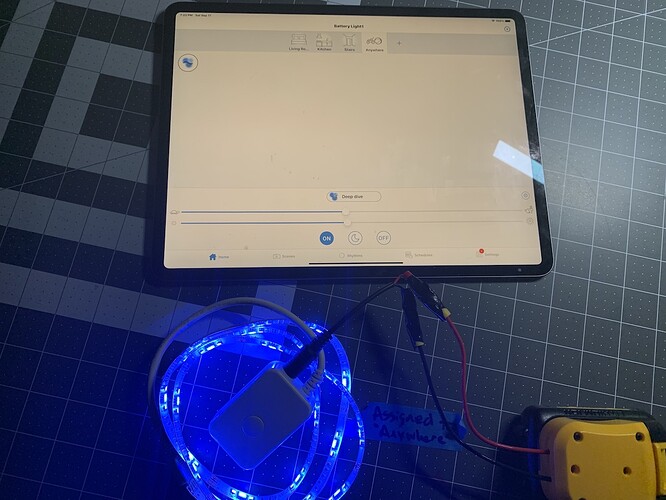 Well, over 9 hours later, it’s still going. But, as you can see, the battery is down to 10.5volts. And interestingly, the controller was still reachable on the network so that’s cool. The light was dimmer than at the start, but still sufficiently bright. So I would call this experiment a success. 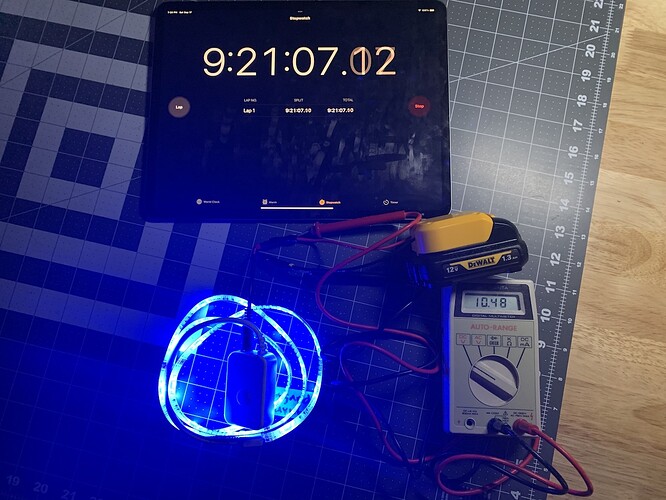 Just to confirm, If the battery is 1.3Ah x 12v = 15.5 Watt Hours / 9.3 hours = 1.66 watts (average). Clearly it started out using more watts (brighter) and as the battery voltage went down, so did the brightness and the wattage used. So I think my initial estimate of 1-2watts is in the ballpark, and it doesn’t really matter as I know the LED strip will work as long as I need it to, regardless.

On a side note - I also tried to run it until totally dead… I used red on half brightness and let it run overnight. After about 13 hours the lights were still on and only a fair amount dimmer. I checked the battery voltage and it was down to 8.5v. That would normally be doomsville for traditional battery’s, and could be damaging the lithium one as well. But shortly thereafter it did go out. Could have been the battery, or the controller could have cut off too.

I put the battery in the charger and the charger didn’t recognize it was there… Doomsville? I let it sit in the charger 5-10 minutes, took it out and plugged it back in and it registered this time and started to charge. So the experiment didn’t totally kill it. When it was charged I remeasured the voltage and it showed 12.06, so maybe I took some years off it’s life, but hard to tell.

For the real project I’ll solder a decent barrel connector directly into the battery adapter to be much more tidy.

On a super side note. In the WIZ app you have to choose a ‘Room Type’ for light when you connect it. There’s no assumption that it could be portable. That’s short sighted. 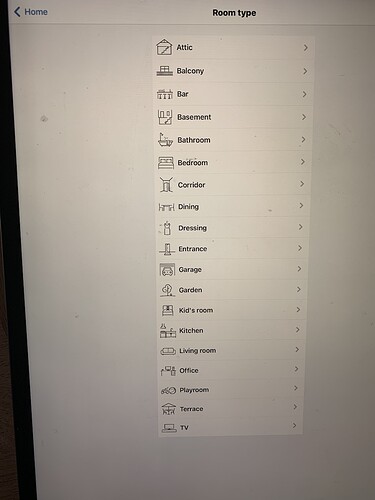 But you can give it a custom ‘location’ name, although you are stuck with the supplied icons. So it’s located ‘Anywhere’. Seemed accurate. 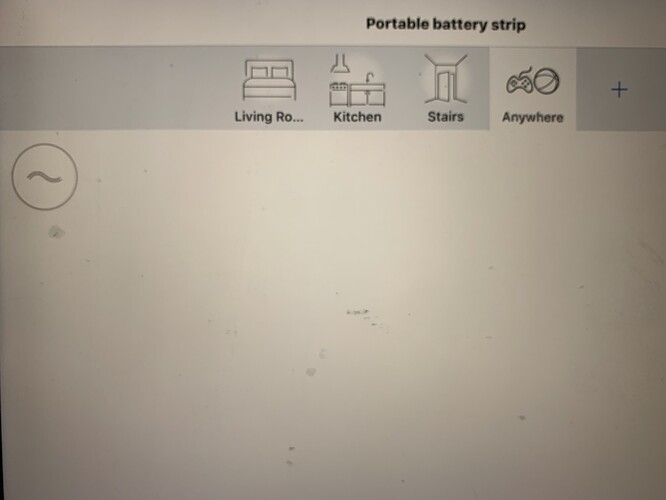 With that, we’ll call it a wrap…

A terrific outline. I am wondering about powering the lights. Did they come with a connection? Or how did you do that part ? Many here would have a faceplant at the simplicity of the answer, but others I think can be as confused as I am.

Not certain it’s the same one but I ended up just donating it to goodwill, as the app required your location to set up. No way I am providing my physical location to a chinese app that also has access to my wifi.

For a similar project, I ended up buying a LED strip that used a simple IR remote. Most of my lighting is Hue, but I had a clock with an IR LED strip for a while - until thunder threw it off the wall and broke it!

Generally speaking LEDs like this run at 0.02A per color channel at full brightness. Each “LED” on the strip actually has three tiny LEDs in it, red, green, and blue. You can get a magnifier to see them or look online for a handy picture. Here you can clearly see the three tiny LEDs that make up our RGB emitter:

So you can estimate watt draw at full brightness based on the formula:

At full brightness white that is about:

This is complicated by the fact that the leds are driven to hit that amperage and therefore have a forward voltage of probably something a bit under 3. At some point in your circuit the voltage is dropped from the 12, and that will cost a bit of efficiency. Also the led colors are driven by a microprocessor (or microprocessors depending on the type of strip they use), which has some small amount of draw.

All of this is to say that it’s really hard to calculate this stuff out to high precision, in general the LED draw is the largest factor, and you can ignore the rest.

As for half brightness it gets tricky and might explain why your power meter can’t read it reliably. The brightness is controlled by turning the LEDs on and off very quickly at full power. The concept is called pulse width modulation (PWM), meaning that you change the duration of on/off times to get the desired brightness. In practice it’s not a linear arrangement, meaning that 75% on time does not necessarily yield 75% brightness, but it does inject a problem for a digital reader because it’s trying to read a moving target. Interestingly (or not) it turns out that half brightness is right about half PWM duration, but it’s not clear whether that equates to half power draw. It’s probably close enough for the number of LEDs you’re dealing with.

Here’s a graph of pulse length vs brightness: 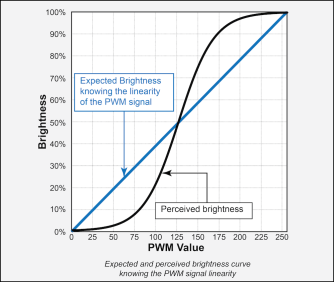 Add to that the complication that because red green and blue LEDs have different brightnesses for the same power draw and the microchip or circuit compensates for that by altering the power to the LEDs to balance the overall light output to make a neutral white and we’re down a whole other rabbit hole.

… and on top of that advertised battery power is often inaccurate, and battery voltage curves as they draw down means your input voltage drops[1], and a whole host of other external factors including ambient temperature

So yeah your calculations are slick and have you a ballpark, but I think you were right about simply timing it. There are just too many variables to math it precisely.

If we knew what LED strip they were using here you can probably get detailed power draw data from the manufacturer but I’m assuming they’re not telling you that. It’s probably ws2812b LED based but who knows.

Ooo can they connect to Alexa?
Nobody beats the Wiz.
Great project!

Thanks for the comments. The box says they are good for Alexa. Thanks for the full detail on the watt usage and cool pic, I didn’t know they use PWM to dim. As for the connectors. The WIZ controller just uses a ‘Standard’ 5.5mm female dc input for the male end of the wall wart cord to plug into. I just used the battery adapter wires and spliced them to a cut off male DC connector. There’s no real ‘standard’ for these DC barrel connectors, but it looks like the 5.5mm (tip positive) is pretty universal now. Atleast for LED lighting. Here’s the battery adapter and the splitter kit I used to cut off and adapt. It says 8mm but that’s the other strip splice connectors that I’ll use for another project.

Here’s a close up of the connections. The adapted (Black) connector looks bigger in the photo, but it’s not, they’re the same. Or close enough. 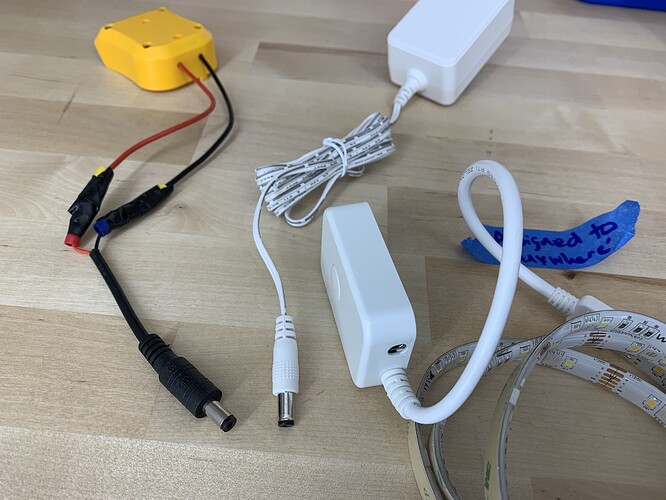 I liked the HitLights splitter above as the male end I cut off had a red and black (+/-) in side the sheathing, so it was easy to know which was + and -. They probably all do, but this made it easy.

I’ve got two separate projects in mind for this lighting method. One is a GF cut acrylic project that is going to take a little while to figure out. Another is just a simple nightlight out of a cheap AA battery powered ‘candle’ that I’ll gut and stuff this into. Should be fun and pretty easy… 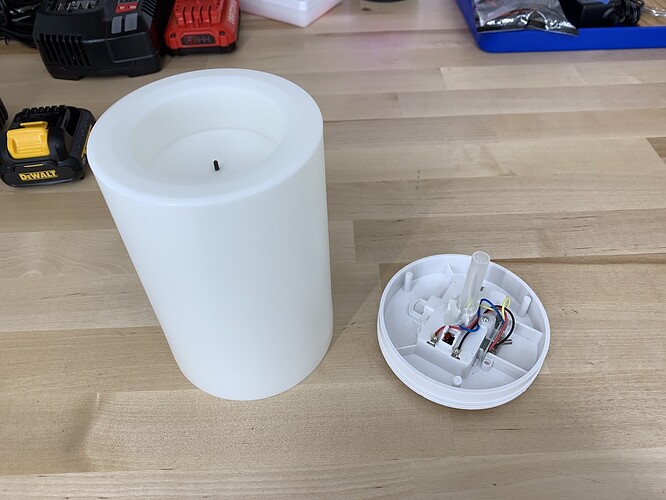 I’m thinking a white acrylic box cut on GF to stuff the battery, adapter and controller in, with a slot in the top to feed the strip light out and wrap it around the box 4 or 5 times. Something like this, but more elegant. 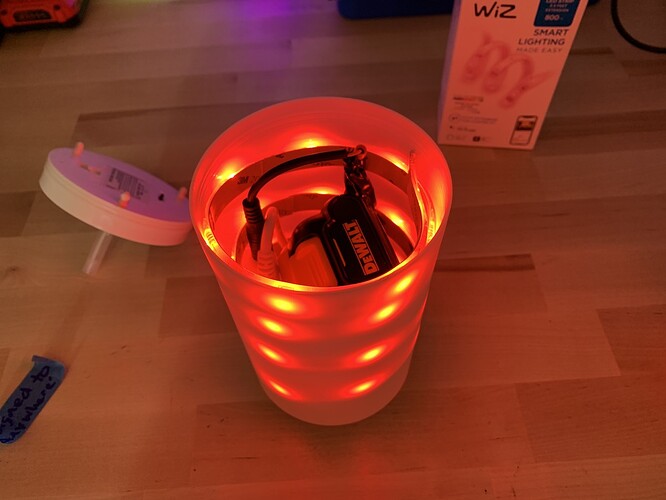 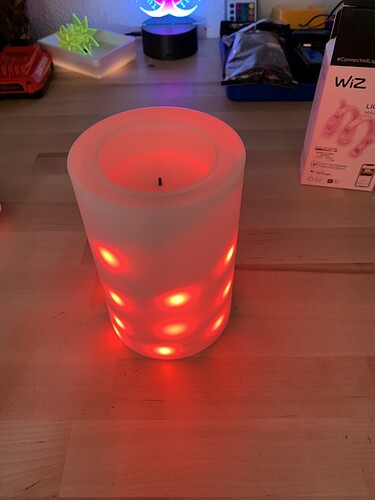 And wire in the switch on the bottom of the candle, to turn it on and off without opening it up of course.