Apologies upfront - I have I no idea what I’m doing. Bear with me for a minute. I have an image that I want to build a puzzle out of, where the pieces are the same shape/size as geometric-ish patterns in the picture. My goal is to generate an svg of paths in Inkscape, where each path represents an individual piece. Different pieces will be cut from different materials (envision one of those gemstone globes where each country is cut from a different type of stone, like so: http://www.ebay.com/itm/282243983199,) therefore I want each piece to be a stand-alone path so that I can consolidate same-material-pieces into a small area when cutting, to minimize waste. I have to create each path by hand by manually tracing over each piece in the image.

So here’s my question, using this honeycomb as an theoretical example. If I manually create a separate path for each of cells 1-6, then by doing so I’ve already traced all the edges of cell A as well. Is there a way to “automagically” create a path for cell A without manually re-tracing every side of that cell? It’s not a big deal when talking about this honeycomb, as it’s just 6 straight sides. But if the shared sides are long and convoluted, like the borders of a country on a globe, then retracing cell A would be a big waste of time. The same question applies to any shared path segment, like that between cells 2 and 3 for example.

Is there an easier way to do this? 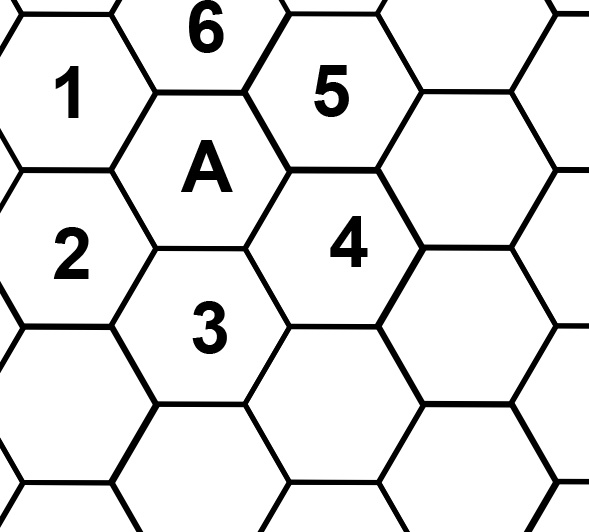 I don’t know if it can be done in Inkscape, but Illustrator has a Shape Builder Tool that would do that pretty easily. (If you are open to other options besides Inkscape.)

(That’s not to say it can’t be done in Inkscape. Just don’t know.)

I don’t see a way in Inkscape that is as intuitive/easy as the Shape Builder in Illustrator, but it can be done.

You would basically need to have another path in your file, from which you would “Path>Cut” or subtract 1,2,3,4,5 and 6 leaving behind A. In this case, that path could simply be a circle or rectangle directly underneath where A is, but just slightly larger than A so there is some area that can be cut/subtracted away from it.

ARRRRGGGG… i am converting an old Avalon Hill board game into a PC Game and it involved a LOT of Hexagons.
When i saw the OP’s post i nearly started screaming…

SO
OVER
HEXAGON
LOGIC

I don’t recall all the details, but what I think you want is Create Tiled Clones. Look for YouTube tutorials for that. Here’s a quick link :

Repeating Patterns Made Easy in Inkscape

In this quick tip, we're going to go over a tool called Create Tiled Clones. It's a very useful menu with tons of options for creating large amounts of identical, yet dynamic objects, such as...

Hmmm. I don’t think shape builder will do the job, as that appears to merge complete paths, as opposed to creating a separate new path from segments of multiple other paths (for example, 1 line segment each from paths 1-6 to create new path A.)

Create Tiled Clones may apply to the example hexagons, but the real-world puzzle would be more map-like with every piece a unique shape. So I don’t think that would work either.

But thanks for the suggestions everyone. Looks like I might be in for a lot of manual tracing!

Hmmm. I don’t think shape builder will do the job, as that appears to merge complete paths, as opposed to creating a separate new path from segments of multiple other paths (for example, 1 line segment each from paths 1-6 to create new path A.)

No, that’s exactly what it does. You just select all the surrounding shapes, making sure they have zero fill and a stroke color, and then click on the empty space between them and it creates a new closed path, shaped like the empty space.

Oh, well then that’s exactly what I want! The tutorial I was reviewing earlier didn’t illustrate that particular trick. I’ll give it a try. Thanks Jules!

Just make sure you have the nodes lined up exactly over the top of each other for the separate shapes…use the snap option. (Make the empty shape a closed path.)