Hi, I’m wondering if anyone has a lot of experience with Ocoochhardwood’s maple/cherry 1/4 plywoods? I started using it, and in the beginning it was cutting reliably with modified settings. Now, it just doesn’t cut. I’ve actually turned a few pieces to charcoal out of frustration - running an absurd amount of passes – and it still didn’t cut through.

I’ve already searched the forums and I know plywoods are variable, but something seems off about it suddenly not cutting at all. I’m wondering if my machine is having issues. Before anyone asks:

I tried the default proof grade settings which never worked for this plywood (even though it’s really only about .23+ inches). Started with 143/full power which worked fine for a while, then suddenly just stopped cutting through. Tried 135/full - still didn’t cut. Tried multiple passes. Still didn’t cut (but charcoaled nicely!).

Anyone out there with experience with this particular plywood that has a recommendation?
I’ve opened a ticket, because I feel that it’s an issue with my Glowforge, but I’m not sure what they’ll do since it’s not proofgrade material – which I cannot afford to use or test with at $30+ a sheet and $25 dollar shipping.

I’m disappointed and thinking that maybe the Glowforge just isn’t a reliable machine for anything over 1/8" and/or engraving. :-/

Thanks in advance for any helpful pointers.
Kristy

I’m sure you know this but there is zero the company can do for you without testing on company supplied material with a known test pattern (Gift of Good Measure). A proper optics chain cleaning by the user is also necessary. There are WAY too many variables with 3rd party materials. I have a stock of material from a 3rd party that appears to be consistent, looks the same, weighs the same and has the same SKU number. But material I bought in one month will cut, and stuff I bought in the next will not. Composition, glues, binders, etc change regularly. Especially at a time when wood products are difficult to source.

have you tried rotating the wood, try a different piece, maybe the issue is the wood,
@rpegg is right, try a test with the gift of good measure on proofgrade, lets start making sure you GF is working properly, eliminate that, then you can work on the wood issue.

I have been very happy with Ocooch in all I have used, but there is something in general that you need to pay attention to. If at any time you see like a candle flame where it is cutting It will not be cutting through at that point. If you slow it down it will just flame more and still not cut. Ocooch Mahogany (.25) is the best of any of the mahogany I have used but mahogany is one of the easiest to over flame of all woods I have used. If I am getting flames I do not slow down but increase power or make more passes. If I still cannot cut through (and mahogany is the only case I have had to do this) and I can see the cut almost cuttting through I have flipped the wood over and cut (very lightly) from the other side after very careful alignment and a test at 1 power that will show where the cut will be.

Still you need to test any piece pf wood you are having trouble with as small as possible test. This is one I made specifically for that mahogany…

I was having a lot of issues with some mahogany (it burns easily but is hard to cut) so on my last bit of scrap, I needed to see what settings made the best cut. The design happens to fit the bit of scrap I had, but you can move stuff about. I used the Glowforge text so you can change what it says (and the Glowforge rectangle) as well. [cut test 2] Edit: Unfortunately it auto re-arranged everything so all the text is at the top instead of over each rectangle as I have it. By setting each rect…

This was specifically about ply, though, I think you’re referring to hardwood?

Not that your advice is really all that different in either case, the same techniques should work in both cases, I just wonder if anyone else has had success with 0.25" hardwood plywoods from Ocooch.

Like you, I’ve had nothing but success with my Ocooch purchases, but they were all solid hardwoods.

but they were all solid hardwoods.

As you know I am looking to avoid anything with MDF either Proofgrade or otherwise as I have had nothing but problems long term as it eventually returned to the sawdust from which it came. Add to that the glue to hold the sawdust together is not necessarily the same from source to source or even the same source over time.

However, as you point out the design I referenced was deliberately universal so the text could be modified for reflecting any settings you want to try. By the OP they had settings that worked on other pieces of the same material but not now. The mahogany was particularly sensitive that the range between not cutting and burning is very small and thus the need for several variables. Since that sensitivity was what the OP was about, that is why I added the test design in.

Yeah, I sort of figured that, but decided to poke around and see if anyone had any more info than I already found in the forum on this particular product. GF support responded with the auto-reply, but I’ve already tried everything they recommended. Thanks though.

I have gone through several panels of wood now. I have rotated it, tried different spots, etc. I seem to start having issues after about the first 10 minutes of cutting. I haven’t done the gift of good test simply because I don’t have 1/4 proof grade plywood, and paying $55 to get a piece seems excessive at this point. I’m going to see what happens when I try to cut 1/4 piece of solid hardwood (not ply) from the same company – and maybe that’s my solution if it works. More than I wanted to spend on my product per piece, but still better than proof grade if it works.
Thanks though!

It sounds like you’re using 1/4 hardwood (maybe not plywood ?), but that was going to be the next thing I try - so thanks for the info and the cut test file. I do run small samples on each panel first, and they usually cut. It seems to happen after I get a couple of pieces cut, and it’s happened on several different panels. I did try going a bit faster with multiple passes, but still didn’t succeed – although I’ll admit I only tried that with one setting.
But thanks for the info!

On another note, since you obviously have experience with Ocooch’s hardwood, have you ever used the 1/4 maple or cherry – and if so, can you offer up a good starting setting to try a first cut?
THanks!

and if so, can you offer up a good starting setting to try a first cut?

That is what I use this for,

it lets me know what happens at a set of standard settings. Even with simple things like cherry and maple there are several different species each, and even then each tree has a unique circumstance. Often when getting ten boards of the same species the grain will even be the same pattern as each piece came from the same bit of log in an order you can follow in the end grain seeing each with the one above and below. But buy more a month later and it will be a different log and may or not be the same species, so is worth a test.

Mahogany may be the most flammable I have tested, but hard maple s the least flammable and I have found a reasonable cut from even 100 full power though you want the fastest that makes it through and 1/4 inch would likely allow faster.

Thank You for the great info. I’ve ordered some regular hardwood (just maple and cherry) to give it a try. It’s a little more than I wanted to spend for this particular product, but if I can get it to cut with regularity, I’ll be happy.

Plywood such as Baltic Birch that has many layers that makes it very strong and not warp, but this is quite different from MDF with veneer on each side. nice woods like cherry, maple, or walnut, or more exotic stuff that I prefer to make things I hope will become treasures. This however increases the thought necessary so you have a more expensive cost but more beautiful and lasting.

Woot! I found I had ordered a piece of the 1/4 as hardwood from Ocooch when I ordered the plywood. So I tried it with your test file, and I think I found some reliable settings to cut the cherry and maple (those are the only kinds of woods I had).

They all seem to cut, but the faster speeds can be a little “iffy” on the cut in spots, so I’m still trying to decide on one or another. The 250 speed gets slightly more burned on the edge than I like, but at least it’s not a black char.

I’m kind of exhausted with testing at this point, but maybe in a day or two I’ll pull out one of the Ocooch plywoods again, and test multiple passes at faster speeds and see if I can get something to work there as well.

Thank you again for your help.

I engraved three kinds of wood. the top is Mahogany (cleaned up a lot) Below are Maple and Walnut (hardly touched from how they turned out. the Mahogany is much darker than new, 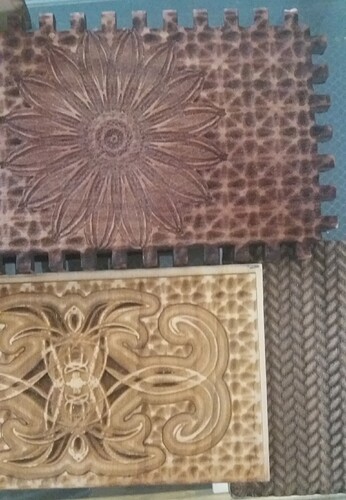 Beautiful! Much more complex than what I’m doing.

Those must have taken some time to engrave though.

Those must have taken some time to engrave though.

Like making things on a 3D printer that also makes many passes the time taken will always take longer than making a single pass as when cutting. If you were to build the same design on a 3D printer of the same size you would be very happy if it took 4-5 hours if not more than 24 hours. If one sets their expectations in that range, engraving goes quite fast.

Many here are quite happy with 340 LPI where you can see considerable “grain”, especially when doing deeper relief engraving. Working at 1355 LPI that “grain” can almost be eliminated, As making more LPI cuts deeper than fewer LPI the head can move much faster, but as the head has to decelerate and accelerate when going the opposite direction the time saved can even go negative, depending on the width of the material,