Hi! The wonderful tech support team fixed my poor burned up GF. If I’d known it would cut this well I might have burned it awhile ago! (Just kidding). I did want to post this - maybe someone thinking of getting a GF who lives in this area will see it and do what I didn’t, i.e. get the air filter. I’m trying to cut a new marker box. It has 88 holes, and due to the heat I can only cut 6 at a time before overheating. I know- no one will believe me, and I’ll get all sorts of advice about cleaning this and checking that, but I live 10 miles north of the Everglades. It is THAT hot and THAT humid and it doesn’t really cool off for months - l think the lowest temp we’ve had in 6 weeks was 74F, and that was during a night thunderstorm. Under these conditions, the poor thing is really struggling. It’s going to take awhile to save up for that filter, but I’m going to get it! 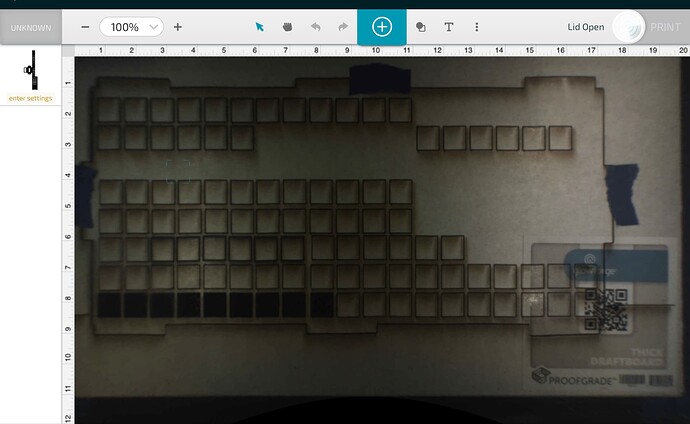 it IS in an air conditioned room. thermostat is only at 74, though. i’ll try it cooler.Thanks. BTW I wasn’t complaining. it’s physics, I get that.

Have you tried a high volume external fan vented outside? Not only will it rid you of all the smoke, it will draw more air through which will move heat out.

When near the max temp the Glowforge itself will add a couple of degrees while working, and then stop and try to cool off. If your pro is in 80-degree air that cooling-off time might be quite long when even the fan still running will be heating things some.

I lived in central FL when I first purchased my GF basic. I vented it outside with the external fan and it never overheated. The AC was kept pretty cool at all times as I don’t do well with heat.

We used to live in Orlando- it’s actually a lot cooler there.

That’s something I’ve been considering for awhile, but I have no idea how you would go about doing it.

It’s the best way to go. Just make sure you put the fan and the end of the hose and have it blown out your window/vent.