One of the fan blades broke off during cleaning

Hi All,
I was performing a deep clean of my GF. I ran the fan cleaning module and when I turned the fan on one of the blades snapped off

Can the GF run anyway on a missing blade or do I need to get a whole new fan? Anyone else have this issue?

Gosh I think that “spray degreaser into the fan” thing they came up with years ago was one of Glowforge’s worst ideas. It doesn’t clean anything, it just builds up a coating on the fan that makes it become unbalanced and louder over time, and you are NOT the first person to have their now-unbalanced fan decide to throw a blade.

The easiest way to deal with this is to buy an inline fan to pull the smoke out of your Glowforge, and turn the broken fan off by toggling the “air filter is attached” setting under the cog icon in your Glowforge app.

This is the fan I am using: https://www.amazon.com/gp/product/B07FPFVZTZ

If your machine is under warranty, the company would likely offer to replace the whole machine with a refurbished one if you contact them. Seems like a lot of hassle and wasted money / CO2 emissions to me, I’d just buy an inline fan. Not only does it get you back up and running, but it’s MUCH quieter which makes running the Glowforge more enjoyable.

I should’ve ordered that a long time ago, thanks so much for the reply! Until it arrives though, can I still run the laser? Or is that a bad idea :-/

And that in-line fan is a 6inch? How does that work with the 4inch section?

one of Glowforge’s worst ideas

One THOUSAND percent. That whole idea of “put a solvent on your electronics that are coated with a gunky mess” is just terrible.

I think the fan placement and arrangement (especially in a pro) is the worst design flaw in these machines.

can I still run the laser?

No, the fan is way out of balance and will vibrate hard.
The advice for an external booster is the way to go in my opinion.

There are both 4” and 6” fans. The 6” are more effective but require a reducer connector.

Which Glowforge do you have and how long have you had it? Even if you run an external fan the exhaust fan will spin and vibrate badly. If still under warranty I would go ahead and let them provide you with the refurb, even if you use the external fan. If out of warranty and not a Pro then removing the fan yourself is not a crazy idea.

The 4" inline fans don’t move enough air to replace the built-in fan. 6" is the smallest you should consider. You’ll need to either use a 4-6" adapter and use 6" vent hose, or two 4-6" adapters to continue using 4" hose. 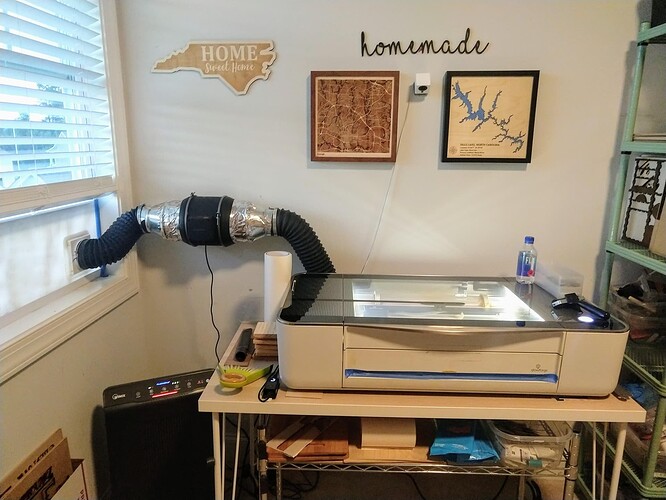 I used a 4" inline fan in conjunction with the stock fan because my ducting was so long, but when my stock fan failed, debris quickly built up inside the machine. I switched to a 6" Vivosun which is virtually silent, with a home-made (laser-cut) coupler from my 25’ of 4" hose from the machine, then and additional 10’ of 6" hose to the window. 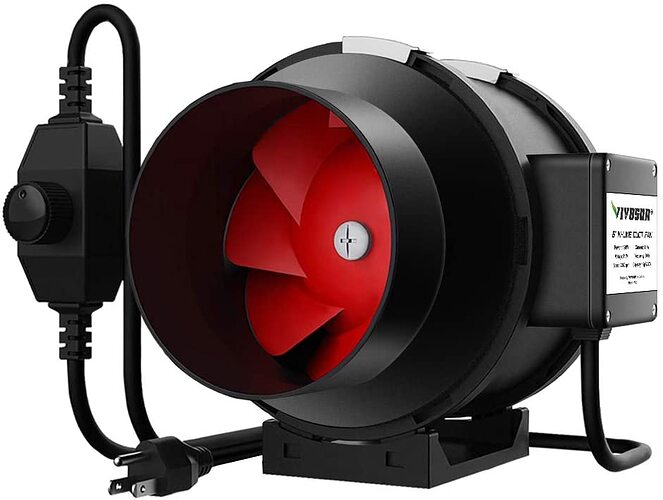 Basic, I’ve had it a year and a couple months now. I’ll check on my warranty thank you, but now this sets me back

Basic, I’ve had it a year and a couple months now.

It is out of warranty. The good news is that the fan is accessible.

Am I the only one who has noticed 80% or more of the problems occur after cleaning these machines?

Perhaps there’s a special property to laser dust that makes it unlucky to remove? (Everyone knows that it’s unlucky when the blue smoke escapes from an electrical component.)

80% or more of the problems occur after cleaning these machines?

Over-vigorous cleaning by folk not yet understanding how everything works is a serious risk. The number of nonworking machines in the first few months vs those that get problems after two years or so seem from here to be considerable. Only the company knows for sure.

I’ve been using a 4" with no issues for coming on 4 years. I have a 2nd one right at the back of the machine for when truly smoky things are being cut. YMMV, but it’s definitely not a yes/no answer. My run is only about 6’ but it does turn three 90ºs in that space.

@tupouleota I definitely echo the suggestion of an inline - they are SO much quieter no matter which setup you use:

As far as what to do with the now unbalanced fan - can you get in there and remove the other blades? There are instructions on here somewhere about how to remove the entire top of your machine to get at the fan, but that may be more than you want to attempt.

I saw a YouTube video on how to remove the fan, but I’m not confident in my abilities and I don’t even have the tools. I’ll just order an inline.

Is it better to get a 6” than 4”? I see the same brand has a 4”, but I don’t want to spend extra on the reducers or the 6”, but would like everyone’s opinion. My work space is small, I use the 4” inch hose right to the window, it hangs about 3 feet.

The 4" version does not move enough air to replace the built-in fan. Smoke will not be cleared efficiently, and the Glowforge will start overheating and pausing jobs to “cool down” often as the exhaust air flow is all the cooling it gets in a GF Basic or Plus. Many a person has bought the Cloudline S4 only to then have to buy the S6 when they realize the 4" doesn’t do the job.

If you know anyone with a 3D printer they can print up a 4 to 6 coupler fairly quickly. I’d offer but I’m away from home and shipping eats up the offset for DIY printing