Im curious as to which of you have additional laser from another brand, and if so, what is it?

Did you get it before or after the glowforge?

What do you think of it/how does it compare to the glowforge?

How much do you use it compared to your glowforge?

I had a Full Spectrum model from about 6 years ago. It was pretty basic and futzy to use. The only advantages were cost ($1200) and direct printer driver connection. Everything else made me preorder a GF the minute I heard about them. Gave away the FS model a couple years ago.

Ive seen a lot of that with FSL users. For a long time they were the only thing in the low end of the market.

After using my friends FSL I refused to buy one while waiting the years for a GF because of the horror stories. Im so glad I did.

I did buy a k40 in that time to play with, and turns out its practically the same thing as their old hobby lasers, just at the actual price its worth lol.

Internal cooling alone is a huge improvement. I had to run the FSL with a 5 gallon bucket of distilled water and small air compressor. It was a pretty ridiculous set up.

I got a Blacktooth laser in 2013. I never got it to where I was able to do anything useful with it. I think that is mostly because of interest – I wanted to use a laser to make things, not make a laser.

With additional experience I have now from working with the Glowforge, I suspect I could do a lot better with the Blacktooth. No real reason to bother, though.

You can read more detail than you could possibly want about my Blacktooth experience here:

Also, if anyone in the Phoenix area (or within driving distance) wants a deal on a barely-used Blacktooth laser, I would love to have the space it takes up back.

I had a K40 which is a tinkerer’s machine. And unsupported except via the users (at the time a loosely coordinated Google Plus group).

The Redsail was next but can’t live inside which is a problem in CT - it’s too big for my space. Multiple boxes for air, exhaust & cooling. (But with the chiller it can keep plugging along at over 90 degrees.)

I liked the size/footprint & all in one box), domestic support company and 3D engraving.

I’ve never really done much with 3D engraves and support isn’t far different than the Google group but worsened by the proprietary nature of the hardware. That’s why I might not elect to repair this one if it’s a 1K repair - I’ll look at the alternatives that have copied the GF form factor. I can learn a new software/operations model if necessary.

A lot of people just don’t get how big of a thing this is.

I see a lot of people making comparisons saying you can get an Epilog or ULS (their smaller desktop ones) for about the same price as a pro. I have to ponder the definition of “about.” Yes, you can get them… but I wouldn’t say for “about” the same - especially if you got in on pre-order prices.

I have had K40’s which means I spent a good amount of time and money to get the machines (yes I said plural) to the the point of being remotely useful. I have a Dremel at my shop because of my internet connection or lack of. I have had hardware and software issues, Hardware required a new machine (but to be fair my glowforge pro was also replaced). Software interface may have resolutions in the future as Dremel seems to finally be aware that they need to do firmware upgrades. Glowforge for the money is easier to use and seems to have a better power output, but both these machines have growing to do. I just think that Glowforge is better at it.

A lot of people just don’t get how big of a thing this is.

Seriously, a water bucket has no ability to maintain a constant temperature level, resulting in horrible banding.

This is a photo an FSL rep uploaded to their own group the other day as an example of a perfect engrave.

They’re all bad, but the banding in the middle one is just atrocious. That’s what a water bucket will get you

Oh wow, I was just talking about convenience, I didn’t know just how bad of engraving they resulted in!

Yeah I gave up on engraving pretty quickly and just stuck to cutting.

Seriously, a water bucket has no ability to maintain a constant temperature level

But you can use a chiller instead. I’ve found the one on the Redsail to be good until about 92-95F. It has a readout so I know what it’s running and it’s interlocked with the laser so if it gets too warm (I have it set for 90F because I’m conservative) the laser won’t fire.

There are lots of nice things - not having to do a mirror alignment is good, masked PG materials are good, camera/visual positioning is good, set focus is good…but there are good things about the Redsail too - 450x600mm bed, no need for Internet or wifi, pass through that accommodates 9" thick material, motorized Z control for the bed (with 9" capacity), industry standard field replaceable parts (I had to replace the e-stop and a circuit breaker in the past 5 years and got both off Amazon), rotary attachment…

I see a lot of people making comparisons saying you can get an Epilog or ULS (their smaller desktop ones) for about the same price as a pro. I have to ponder the definition of “about.” Yes, you can get them… but I wouldn’t say for “about” the same - especially if you got in on pre-order prices.

No one can get one at pre-order prices anymore. An Epilog or ULS that’s used is in the same price range as a new GF. They bring different strengths and weaknesses but if my GF dies to where it’s not reasonably affordable to repair, it’ll get binned and I’ll move to a used Epi. I won’t feel too bad about it as I have gotten a goodly amount of use out of it but I won’t buy back in for current prices with the current support model. So a tube replacement, yes. A mysterious $1000? That’s a nope.

They bring different strengths and weaknesses but if my GF dies to where it’s not reasonably affordable to repair, it’ll get binned and I’ll move to a used Epi. I won’t feel too bad about it as I have gotten a goodly amount of use out of it but I won’t buy back in for current prices with the current support model. So a tube replacement, yes. A mysterious $1000? That’s a nope.

I really hope they get their defecation into a single piece of hossery on repairs but if they don’t, then this.

After going to ISA Sign Expo last year, I’ve had my eye on a Universal laser if I get to the point of needing an upgrade. Their laser that is the same (more or less) dimensions/specs (kinda) was incredibly fast at engraving. As it is, my designs avoid engraving if possible, it just takes too much time on the GF.

Any one have experience with them?

What do Epilog machines cost? I’ve never gotten a straight answer out of them, just a chance to talk in circles and a weird “tell us how much you can afford, then we’ll tell you what it costs” approach (note: trade show environments). I mean, is there an actual price list?

What do Epilog machines cost? I’ve never gotten a straight answer out of them

They are priced based on configuration. You can spec the bed size, motor type, tube type, optics, power, etc. A Mini at 35W with a 12x18 bed is (or was not so long ago) 8 grand. Used you’ll see them for 1/2 that. I haven’t seen detailed Zing or Helix pricing but those can really jack up in price…but you can get a dual model with both CO2 and fiber!

ULS lasers are a bit bigger & cheaper both new and used for comparables. You can get a larger format 50W for what a Mini will cost.

Any one have experience with them?

i have experience with one, but probably not the one anyone here is likely to get. my office has a PLS6-150 (but with a single 75w tube and a slot to add any number of different tubes, from another 75w to get to 150w or to add something like a 30w tube, which would be a better engraver, especially 3D).

but, that PLS6-150, with separate air assist and a BOFA filter (plus installation and some level of support for the first year, which i don’t know exactly how much that was) was in the $40-45k range.

that said, it’s a print interface, which i like, although it’s not as user friendly and takes a lot more playing around to get the hang of. but it also has a TON of basic preset starting points for a ridiculous range of materials. physically, it’s solid as a rock. 32x18 bed, 9" z height. it’s a beast. and it engraves lightning fast (at least 2x, sometimes more the speed of the GF). watching that head move back and forth at those speeds is crazy.

i couldn’t justify the cost/size/space of an industrial laser. i caught enough crap from my wife when i spent $2400 on the preorder (i missed the first window). and my GF is upstairs, and up old attic stairs (narrow) at that.

thankfully i have access to the beast. i hate to say it, if my GF craps out and i decide not to deal with stuff, i’ll probably just have to live w/going to the office if i want to make stuff. i would miss being able to run upstairs and do whatever i want whenever i want, but it would be hard to justify spending a few thousand again. especially w/access to the Universal at work. i got my GF before we got that in the office.

Their laser that is the same (more or less) dimensions/specs (kinda) was incredibly fast at engraving.

Just about every laser I’ve seen or used is very much noticeably faster than the GF. I think (no direct knowledge or special sauce involved) that it’s due to the trick power supply and the sprung weight of dragging the tube all over the bed. The variable power supply likely has some switching timing constraints and the gantry suffers from a mass acceleration effect. Just endemic to the design. Proportionately speaking the acceleration/decel time is a huge factor the faster the travel time gets to be.

I saw this at a Rockler store in St. Louis this week. (Sorry @cynd11, I was on s tight schedule and needed some t-bolts).

Anyone have experience with Laguna? The sales guy was non-comittal about it. Needed external chiller and was hooked up to a filter about the size of a compact GF filter. 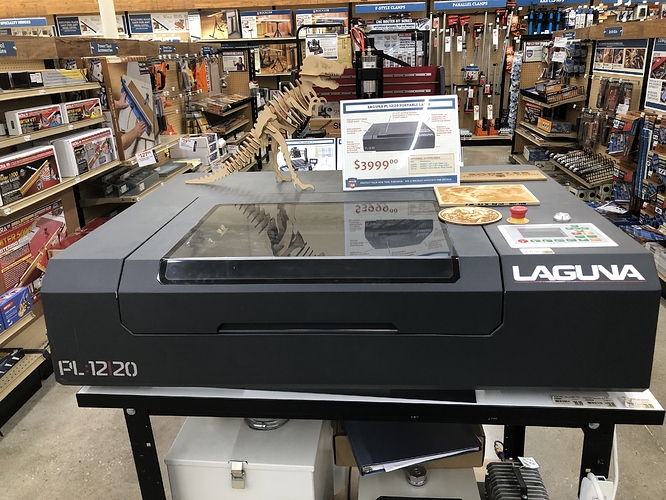