Inspired by @steph and my ongoing desire to master parametric design I have come up with this.

If paper had been involved I would have gone through reams of it to get here. A simple two piece thing and it has kicked my butt for days. I have started over from scratch several times. It makes me have a deep respect for those who can do complex assembles parametrically.

I can’t promise you can’t break this model but I have been testing it and using reasonable numbers it is not breaking for me now. 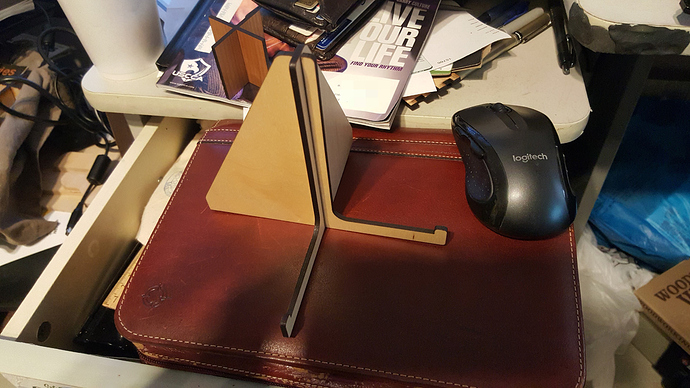 Continuing the discussion from Picture Stand:

That’s going to come in handy for avoiding having to convert units…super!
(And I can’t test.)

Looks good! Is there a parametric picture frame in the works?

That’s actually a great idea for my next assignment. Or maybe a box. I hate having to design a box every time I want one.

Oh, I don’t think the drawings come through when you download. Could someone confirm this?

Anyway, this is in inches so it won’t export as DXF to Inkscape well. I made mine by making drawings right in F360 and saved as PDF. The Kerf is in the model and you can change that if you need to.

The fusion file appears to be working fine parametrically. (The sketches are there - were there other drawings affiliated with it?)

There were separate drawings, I guess those don’t get saved. I guess that will be an assignment for the end user.

Wonderful. It’s so worth it in the end to use 3D design programs. I know that when I finally got the basics of OnShape down, it made a big difference in my ability to think in differently dimensions for design. It’s one of the things that pushed me over into by a 3D printer. Until I couldn’t design for it, it really wasn’t worth getting.

This kind of reminds me of when I discovered pivot tables in excel. So hard at first and made me wonder if I had actually known excel in the first place, but then the payoff comes.

I had no idea how many ways a simple two pieces could fail to work parametricly? It’s in the hundreds at least, I know, I tried most of them!

I rarely get all my sketches to turn into black lines. I pay for it later though.

I tried and failed many times to figure them out. When I finally did, it was so easy. But it’s like 3D design. You are thinking in different dimensions. Same thing for me with cross tab queries in Access. It took me a while to think them through.

Yeah the drawings that are part of Fusion 360 projects do not get included when you share a 3D model, however you can invite users to use your projects collaboratively and then they have access to the drawings as well, but then you need have other users provide their email so you can invite them.

Or maybe a box. I hate having to design a box every time I want one.

Try out the parametric box design I shared a ways back. I found some issues with the split box design but the original finger jointed box is still good I think.

I’ll certainly study these but you should know me by now, I’ll not be happy until I figure it out and have my vision of one done.

Oh yeah totally understood, nothing like figuring it out after a hard-won battle!