I designer we worked with got me an air plant for Christmas and I felt it was pretty enough to deserve a stand. My original thought was to create a cylinder with an engraved granite circle as the top. @madebynick suggested having a hook come off the side, so I added that in. The hook has a slightly “Tim Burton” vibe, which I kind of like, but I’d probably aim classier if I were to do it again. My ability to make pretty curves is no match for the mighty @Shell.

Still unsure of whether I should stain the wood-- it’d lower the contrast but also make it feel more “finished”.

I’ve got some black marbles coming to put in the glass thinger under the plant, which I think will be neat too! 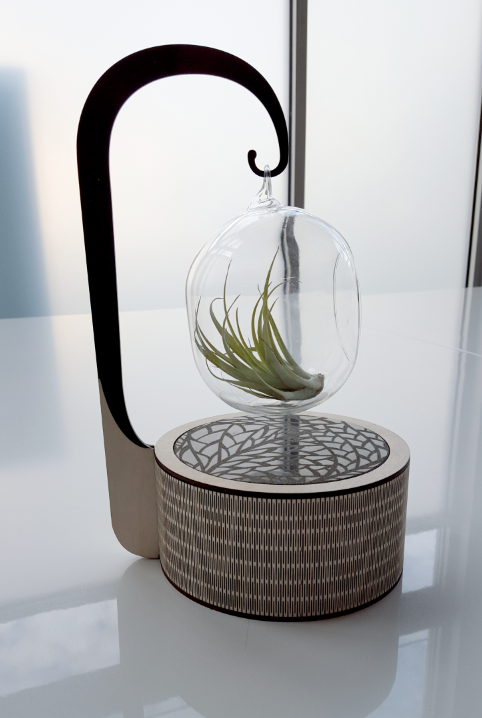 Well, that’s flipping amazing!!! Wow. Was it difficult to get the living hinge so round? Would love to see different angles.

Awesome! Any walk through photos?

Great work. I can see the improvements in the GF with these latest projects.

Very nice!
I really like the idea of building structure and fully 3D shapes from wrapped/folded wood.

I thought Tim Burton, too, when I first saw it. Nice!

That’s beautiful @Tony ! The living hinges aren’t just functional, they give a really nice pattern to the base that would be missing if it were a solid texture.

That actually gives me a good idea to use living hinges for other plant ideas, like baskets where you want to retain soil but still allow water drainage.

Love it. Any chance of a closer-up on the engraved rock? I’m interested to see what kind of rock it is as it appears to have taken the engraving well.

This is spectacular! I too would love to see some other angles though, having trouble figuring out how the hook is made from just the one 2D view!

That is some fine kerf there and excellent material to do such a curve. Nice design and execution. Good design. Wonder how a mirror too would work. Excellent idea for a display of some small object.

Nice! Btw do you already have a glowforge?

Tony’s our cofounder and chief product officer, so… yes.

Love the design. Any chance you could share the file so we could make one? Or add it to the future catalog?

Beautiful work! Was the Glowforge used for the rock?

It was - I think @Tony sourced that particular piece on the internet, but we’ve engraved black granite floor tile from Tiles-4-Less down the street just as nicely.

That’s really cool, Dan. I didn’t know that Glowforges can do stone at all. This will be quite an upgrade from my 2.8W home-built setup.