Hi Everyone, S’me again! This one is my smallest book box I’ve made so far, measuring about 3.5" x 5" x 2", give or take, and it kind of flowed pretty well, so it went fairly quick. Took me down a rabbit hole…literally!

I had experimented with making some vegetables, bread, and dishes out of clay, and then this idea of this cute little kitchen started to form. A few pastel jars later and now I’m thinking something like Winnie the Pooh, or…then it hit me, I need a Christmas gift for the mother-in-law and she loves Peter Rabbit! So, here’s my take on Peter’s (Mother’s) kitchen in their burrow, with a little stick-frame window overlooking a field. There are no lights in this one, I just printed out a picture of a field for the background behind the window. 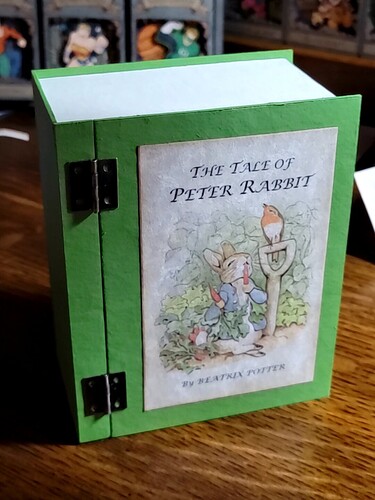 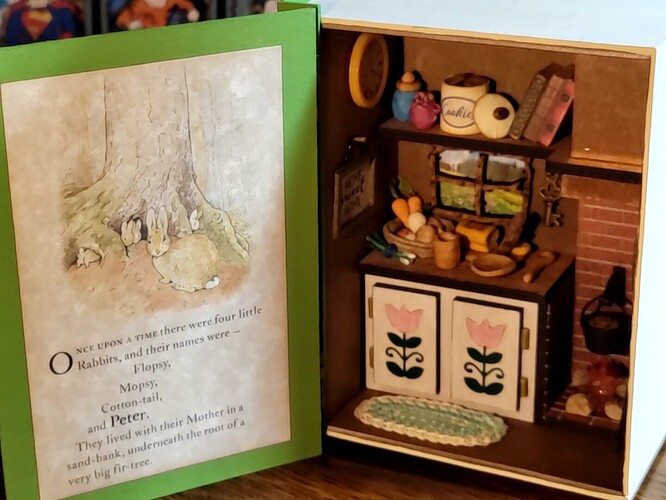 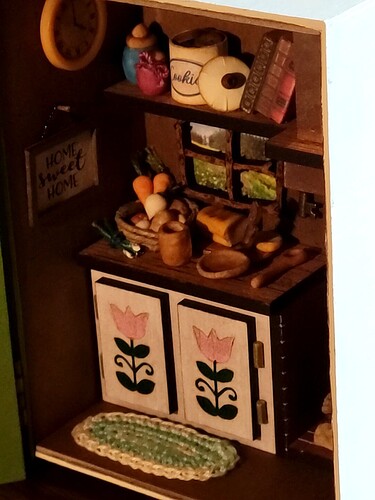 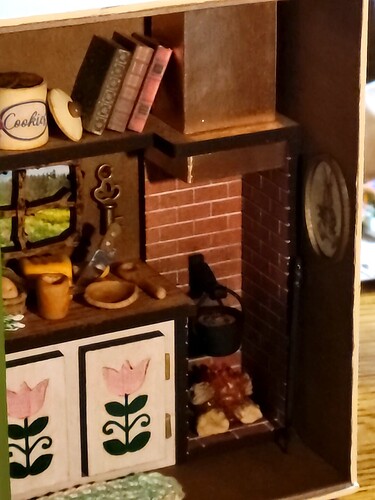 I thought about using an actual page from my own copy of the book, but my soul had a hard time with that, so I just printed it on parchment. The box is 1/16" chipboard, I used the GF to engrave/cut the cabinet/counter, fireplace, pot hook, shelf and window frame from medium PG draftboard, The cookie jar, books, hood and flashing, knife, and cutting board are cardstock, the other jars, food, dishes, and logs are clay, the fire is hot glue. The pot of stew is the tip of a nerf dart, filled with hot glue, painted, and a paperclip handle, clock is a button and some UV resin over a clockface. Crocheted the rug. The food basket is strip of twisted paper bag (same technique I used for the vines in the Voodoo Magic box) Here’s a little better view of the food, apologies for the bad lighting: 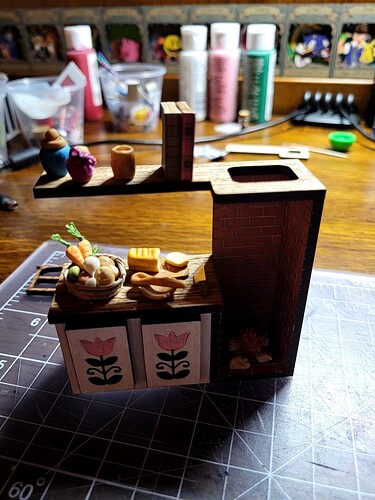 I’m really enjoying these books, they’ve been a good way to stretch my PG materials as detail elements while the bulk of the structure comes from cheaper bulk chipboard sheets, and it’s fairly easy to play with the depth of the back wall and spine to make room for wiring. What’s going to be next? I have absolutely no idea, we’ll see where the crazy muse leads me next. Until then, though, thank you for stopping by and Happy Forging!

Just amazing! Can’t wait to see where your muse leads you next. Thanks for always sharing.

Wow, it just seems like you keep adding more and more detail each time! Your creations are so amazing, thank you so much for sharing them here!

What a beautiful gift for your mother-in-law. Thanks for brightening my morning with this project.

Some people are dabblers (me), some are crafters, and some are makers. You, my friend, are an artist.

Simply delightful! Your Mother-in-law will be enchanted!

Completely adorable! I love the printed page so that you know specifically what it’s from whether it’s opened or closed

Love miniature books, and of course yours is extra special (as we’ve come to expect)!

This is fantastic. I have thought about thinking about attempting to try to think about how to consider a way to imagine how you do these but then I get to overthinking about it and just give up. I’m in awe!

I purchased my first iPad Pro in June 2010. The Peter Rabbit Interactive Pop-Up Book was the first app I purchased. It is absolutely the most beautiful book. The music and colors are extremely mesmerizing.

This is fantastic. I have thought about thinking about attempting to try to think about how to consider a way to imagine how you do these but then I get to overthinking about it and just give up. I’m in awe!

And that’s exactly why I don’t think I could do any tutorials, because half the time I don’t know what I’m doing either until it’s done, and once I’ve figured it out, I usually have zero desire to do it again!

But, I’ll happily try to explain my process if you don’t mind a read. Generally I don’t start with an end vision in mind, if I do that, it’s too daunting and I never start. Maybe a general idea or theme, but usually it’s one small focal piece, which then train-of-thought eventually leads to a full vision, with little successes along the way to keep me motivated on it.

In this case, the pot of soup was actually the first thing I made, and that led to a fireplace, which led to veggies, cutting board, bread, knife, can’t cook without fire, one thing sparks another until I have enough physically in front of me that I can start playing with arrangement and visualizing depth, height, proportions, relations, what furniture or structures do I need to design for the forge, etc. I don’t really use measured scale, I eyeball it, visualizing a small hand grabbing something, and then grabbing something else, or counters generally being waist height, and we bend about this much when we sit, and could we actually reach that thing or is that thing really just way too big for the rest of it? It usually works out to around 1:12.

Then I try to capture some movement or action, and use details to tell not just A story, but many stories, as many as I can fit in. The knife could have been calmly placed on the counter, but sticking it down in to the cutting board might be Mom a little upset at having to stop cooking to go see why Peter lost his jacket again. The cookie jar open with the lid off suggesting maybe Flopsy and Mopsy snuck a pre-dinner snack. I try to damage or disturb things in a way that makes sense and allows us the freedom to fill in our own stories about how it got that way.

Then comes a lot of math, a lot of measuring, how wide/deep/high for the box to fit it all, everything is custom to the project, nothing re-used from other ones because I just need an extra quarter inch. False backs or walls for windows and lights and wiring, clearance allowances, the cover to go around it (all while keeping the thickness of the material at butt joints in mind), a lot of hand cutting and carving chipboard, re-cutting pieces because I measured not twice, but 53 times and STILL managed to cut wrong somehow because it’s just not fitting together right, and…this is usually the frustrating stage where I’m almost ready to drop the whole thing in the trash.

And then, at some point, it all just…becomes…as I fragment my soul again in to yet another horcrux

So very stinking cute! I don’t know how you manage to make all the tiny details so perfect, but once again you have! She’s going to love it.

Your mother-in-law, and in fact all your friends and relatives, are so lucky!

Your projects are always so fun to see and marvel at! Your mother-in-law is going to be very touched by this wonderful gift, knowing that you took such time and care and thought into making it. Truly a very special gift.

Actually this makes a lot of sense. Most of my best projects have gone through a lot of evolution and morphing before I find success. I’m somewhat of a perfectionist with OCD and ADHD (which leads to PTSD) trying to create masterpieces without possessing artistic talent or imagination. It’s extremely frustrating but I slog onward until I witness a wonderful project like yours then I have to decide to be inspired or give up and cry. Truthfully your projects are wonderful and we all enjoy seeing them. Thank you for sharing them with us.

Never give up and cry. Take a break and cry, OK. Try something different, OK. Perhaps maybe, in truth, the particular forms of art/medium you’re doing aren’t the methods that your soul speaks with. My artistic journey has taken me through crocheting, ceramics painting, a little flat canvas painting but was never good, drawing but never got good enough, paper crafting by hand, paper crafting with a Cricut, and now a GF with everything I’ve learned going on 2 years now, and now I’m starting to integrate lights. I’ve been making ‘stuff’ since I was 9, and it has definitely been a journey built on challenges just to see if I could do it.

And the thing about journeys, they are all unique. Only you know where you are on that journey. But don’t give up on finding your artistic voice, it IS there if you listen.

I too compare my work to stuff I see on Pinterest and think it’s chincey and pffft, so I feel ya.

I never really give up, I just go a different direction until I’m satisfied. I have been blessed with the means to pursue many many interests and have the toys every where to show for it. But my imagination comes alive in the kitchen. Hand me some ingredients and I’ll create you something to delight the taste buds (I also create quite a mess too

) I don’t measure out things, I cook by sight, taste and feel. The first time I cook something I will review a recipe (or several) but then I make it my own. I cook at a local homeless shelter preparing 100+ meals, sometimes by myself. I never cook the “soup line” standards, I try to create something that they would order at a restaurant if they had the means. At times if I can gather up some others to help we will serve it to them “sit down” style and let them be waited on. I also cook for groups at my church and organizations I belong to.