Pick up where it left off?

A quarter of the way through an engraving, the wifi disconnected and stopped the job. I have not moved the item. Is there a way to finish this job? If I start over it will be twice is dark on the part that gets two passes. Can I pause and change settings? so can I start over with a very light or no actually engraving setting and then change the setting once it reaches the point where it stopped? Any advice?

I was afraid of that. THanks for the response.

I could be wrong, but I thought the Glowforge downloads the entire file before it starts printing, so that it doesn’t depend on staying connected to the Internet. I wonder if it was something else (power glitch?) that interrupted it.

Is there a way to finish this job

Absolutely as long as you haven’t moved the material or the graphic.
You can cover the section already done. You need to be real careful so as to be right on the edge of the area already burned. Use a scrap piece of something that will fit under the head but not so thin as to burn through with the settings you are using. Then re-run the whole thing. I’ve done it and it worked.

Dropping wifi will not interrupt a print. Something else caused that.

As stated above, once a print has begun, the machine no longer depends on the wifi connection. Obviously, you won’t see any updates in the UI if you open the lid or pause the job with the button, but the print will complete just fine.

I had tested this before, but just tried it again to verify nothing had changed. Set up a 50+ minute print, pressed the button, then unplugged my router. The print completed as usual. 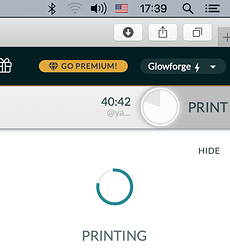 I could be wrong, but I thought the Glowforge downloads the entire file before it starts printing, so that it doesn’t depend on staying connected to the Internet. I wonder if it was something else (power glitch?) that interrupted it.

Only potential caveat to that could be a very long engrave job. I say potential and could because I don’t know.

The onboard storage available for storing a job is only like 100mb. Back in the day, jobs were limited to about 3-3.5 hours. They started compressing the motion plans which allowed for much longer jobs. How that extra data is handled though I don’t think has ever been stated. I’ve seen people talk about 10+ hour jobs which should be 300mb or so. It’s that extra data that I don’t know how is handled (and subsequently, if a dropped connection could impact a long job).

@kim6 I’m so glad to see that @beerfaced was able to solve the print issue for you. I’m going to close this thread now. Please don’t hesitate to reach out again should you need anything. Thank you!