There are many facets to the playing card world, and one of the newer ones is called “cardistry.” Basically it’s extremely complex card manipulation and it’s super popular. Here is a video I had a cardist do for one of my decks a while ago to give you an idea:

To learn this, the kids these days have been using “trainers” which are generally 5 acrylic panels the size of a card so that you can practice the various cuts and moves without potentially dropping 52 cards every two seconds. Most of these trainers are pretty basic, many have no detail at all, so I figured, “why not stick one of my insanely detailed designs on there and see what we get.”

The result is quite impressive and based on my Instagram comments already, this is something that people will go nuts over. They do take a while to make at this level of detail but some of my other designs may work better and go a lot quicker. Still, it’s so rad to be able to have a whim and hold it a few minutes later. 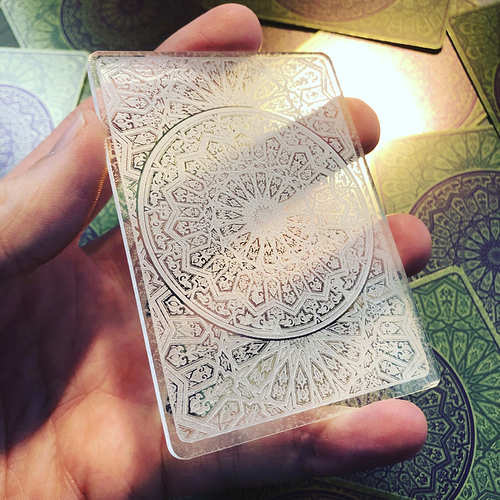 Are you using cast acrylic? if so, do a piece that is not and come back to cast. It will still stink but won’t seem as bad.

This is on the Proofgrade stuff at the moment. I have some other thicker acrylic I’m going to try but I think no matter how you cut it (haha, GET IT!?) cutting plastic is always going to be odoriferous.

That is insane!! Love it! Great idea

Yup, non-cast 1/4" is the only material that has drawn complaints from throughout the house.

I’ve come to believe that different acrylic manufacturers add different scents to their acrylic, and some add none. I could be totally wrong but I’ve turned a lot of acrylic pens and now tried a few different acrylic sheets in the Glowforge. Some acrylics do indeed smell worse than %@$#, but then you get a few that don’t smell horrible. Honestly the proofgrade is better than most.

That was fascinating (obviously helps to have large flexible hands for that gig) and the trainers look fantastic!

Stunning, as usual. Even your “simple” tester projects are amazing.

No foolin’! I ordered quite a bit of acrylic, with a couple of special/large projects in mind. The first time I tried to cut it, it instantly made me violently nauseous! I’ve noticed that this effect seems to depend somewhat on the color and type. Some day, I’ll go through and try a tiny cut on several different colors/types of acrylic in hopes of discerning which ones are okay for me to work with. Have to work up the courage first, though!

Wow – to both the cardist handwork and the acrylic trainer with your artwork! I’ll bet you could make some nice prints using the fancy trainer and a little ink. . .

Sawing the stuff also gives off a strong odor. Never revolted me until I cut black. Made me envious of the ability camels have to clamp their nostrils shut.

@joker, class trainer you did there. Amazing manipulation! A couple hundred years ago you would be burned at the stake for exhibiting that!

I’ve done very little acrylic, mostly proofgrade, and to me it is sickly sweet but not a big deal. Mostly I detect odors long before others, but sometimes I can’t smell what others notice. Perhaps I have a dead spot for the nastier side of acrylic. Or maybe it was being packed off to visit relatives on a dairy farm every summer for two weeks as a kid and having to shovel $%^& twice a day that rewired parts of my olfactory sensing array.

To learn this, the kids these days have been using “trainers” which are generally 5 acrylic panels the size of a card so that you can practice the various cuts and moves without potentially dropping 52 cards every two seconds.

It will still stink but won’t seem as bad.

LOL Hard to imagine. The leather smells terrible like everyone says, but nothing gives me a headache as instantly as acrylic. I hold my breath when I open the GF, bump it a bit and then shut it again.

this smell topic brings to mind a feature request that perhaps @dan would throw in the hopper. I think that for some cutting scenarios, it would be nice to have the glowforge run full exhaust for a little longer after the cut. It only does it for a few seconds but I’d love the ability to set how long I want it to continue exhausting (like maybe 30 full seconds for acrylic), or have a button in the interface that lets me crank on the exhaust manually for a while to get any lingering odor outside.

Interestingly, with the proofgrade dimension acrylic, a stack of 5 trainers is within a millimeter of the thickness of 52 cards and only a few tenths of an ounce lighter. It’s remarkably close to the real thing.

Nope…my hands are smaller and I did that stuff quite a bit in my younger years…can still do it but a bit slower…lmao. Learned one handed flourishes while driving across the country several times…

Sounds like it would have been fun to have that skill during some of the poker games with the fellas!

a feature request that perhaps @dan would throw in the hopper. I think that for some cutting scenarios, it would be nice to have the glowforge run full exhaust for a little longer after the cut. It only does it for a few seconds

Already in the hopper

User control over how long the fans run has been a request ever since the first PRUs went out (& probably the Betas as well). They have increased the time they run slightly but the user control still is awaiting its turn.

Yeah not so much…you get accused of cheating…lmao