Some tips from my polyhedron project in progress (pictures when done):

Still not quite done, but some pictures and important notes anyway.

First: The file at the top of the thread has the wrong connectors for the icosahedron. (The connector labeled icosahedron is a duplicate of the dodecahedron connector. The dihedral angle for that is close enough that you can assemble triangles into an octahedron… with some difficulty… so it’s easily mistaken for that, too. My kids and I sure did the first time we tried to assemble it.)

I made my own icosahedron connector (144°) and updated the original file:

Whichever connector you’re using, you’ll be counting and printing and peeling a lot of them: 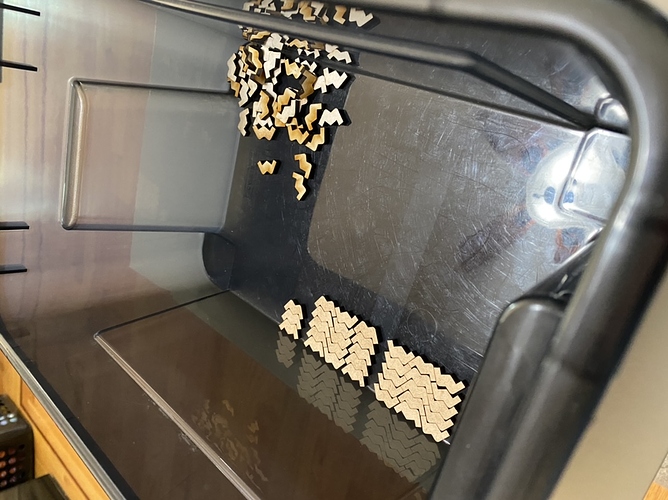 And then assembly is fun. (We’re taking a break between steps because we didn’t print as many connectors as we thought. It’s not easy keeping track while you’re making and arranging copies in the GF UI to use up your scrap!) 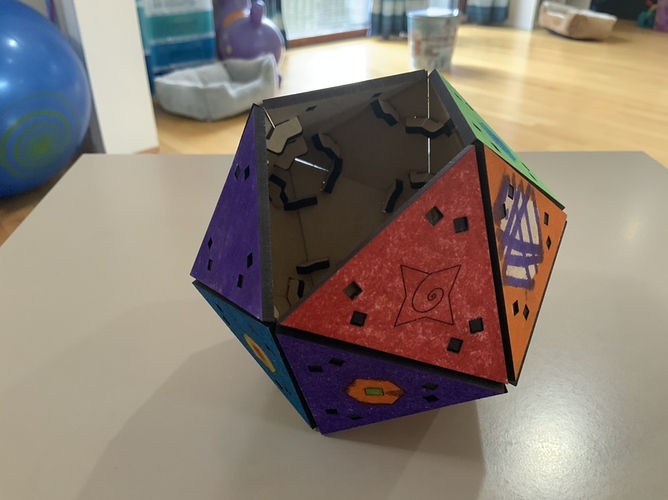 The bigger kid is learning vector design software, so some of the faces have scored designs of his; both of them got to color the sides. Proofgrade draftboard soaks up magic marker pretty well, but it still needs a lot of drying time if you don’t want it all over your hands.

I’ve never made one of these before… How do you get the last piece on? lol

How do you get the last piece on?

So helpful. Now I have a new way to sit in my room and ignore my family…Thanks!

Oh My Goodness - this rocks! Thank you so much!

@geek2nurse Thanks so much for this resource! Clearly they work as is since many people have posted successful projects. But for my own (GF newbie) understanding – when I pull this into my CAD program and measure, the offset from the face edges to the holes is 4.88mm, while the distance on the connectors from the internal angle to the tab is only 4.61. So it seems like maybe they wouldn’t quite reach the holes. Is this difference to account for kerf, or something like that?

@geek2nurse will have the final word here, but in the meantime:

0.19mm is about 0.007 inches, which is a pretty good approximation of kerf in 1/8" materials on a basic Glowforge (especially when cutting slowly, like with proofgrade ply), so I think probably yes.

Faster cuts generally yield smaller kerfs. Basic machines are a bit slower than Pro models, and proofgrade ply is made of MDF core, which requires a fairly slow speed anyway (compared to BB or other easier-to-cut materials), all of which adds up to 0.007 (or a bit more even) being about right. The good news is that for projects like this even discrepancies of 0.005" (or maybe even more) is small enough that the end result won’t be noticeably affected. I think you’re good to go.

Because of that general “faster = less kerf” concept, things like cardboard and cardstock have tiny kerfs when focused properly. It’s rarely enough of a difference with most projects that you’d ever notice, but when doing tight inlay, for example, veneers cut with far less kerf than 1/8" materials, so it can be quite noticeable.

Thanks @evansd2 (and @geek2nurse !) for confirming my understanding (and quickly, too!) I’ve done 3Dmodeling/printing for many years but am brand new to laser cutting, so this whole kerf business is taking some getting used to!

I have a Pro, not Basic - will this have a pronounced effect on the kerfs I can expect? Also, is the kerf “centered” on the cut lines? I realize this probably doesn’t matter for this application but inlay IS on my radar…

Kerf correction is a deep topic, I’d suggest looking at a few posts on the forum, it’s been discussed in some serious depth.

I like the “stroke to path” method in Inkscape. These will get you headed in the right direction.

This is an inkscape-specific thing, but may apply elsewhere. Kerf adjustment is well-trod territory at this point, but I recently decided to see if there was anything to improve performance. The issue: when doing a “stroke-to-path” action on an irregular shape, you can sometimes see deformation of the resulting paths. The solution: add more nodes. The software is making a best-guess estimate, which you can improve with extra nodes. Illustrated: On the left, the original shape. On the righ…

@evansd2’s approach to kerf helped eliminate a lot of my confusion; I was just 'way overthinking it.

I’ve started defaulting to about a 0.5pt stroke when I design, because that is pretty close to the laser’s kerf, and helps me visualize how the kerf will affect my design.

defaulting to about a 0.5pt stroke

In Affinity. It should be the same in other apps, but tbh I’d use a true physical measurement if I were doing this. Points are supposed to be 1/72nd of an inch, but I wouldn’t put it past an app to go off the reservation on that.

Oh, you and your Affinity-hating.

You can input line width in any dimensions you want; it just displays them as points after you do. And yes, it handles them accurately. 0.5 pt is about .007 in, which generally gives me a pretty decent fit on things.

Oh, you and your Affinity-hating.

Not this time! I trust affinity to get that part right.

He said he imported them into a CAD program, though… CAD tends to like to speak DXF or some such, so I might be a bit leery of SVG stroke dimensions coming in cleanly to something like that.

You two are cracking me up!

I do work in a CAD program (Rhino) where stroke width doesn’t exist - but luckily offsetting curves by X amount is trivial and reliable - so I just need to get used to when and where I need to do it.

@evansd2 you’re right in general that SVG in and out of CAD might be squirrelly - luckily Rhino brought in @geek2nurse 's file perfectly. Now I get to see how its SVG export behaves… Luckily, already a few posts by others here who work in Rhino so most of the gotchas have already been found and worked around. God bless the trailblazers!