Looks like IWOOT is selling a 4” vent with fan and filter for just under $70. Might just work with the GF. Anyone else have experience with this?

I bought this before my

arrived…haven’t hooked it up yet. Maybe today. I’ll let you know how it works.

Gotta be from New Zealand, no charcoal i met can claim that

I’ll be darned, lots of sales to Colorado, Maine, Oregon, and New York.

I hooked it up today and it works great! The fan is 190 cfm (shouldn’t stress the internal

fan too much), attached to the 8 ft dryer hose from the

and venting through 20 ft of dryer hose out the pet door on my sliding glass door and into the back yard. Very quiet when running… inside and outside. Really does a nice job extracting smoke and fumes, especially when cutting the stinky

draftboard. BTW I’m not using the charcoal canister…I’ll try that at a later date. The fan, though, works great.

Great thanks for the info. I am planning to make a cart to put my GF on and I wanted to vent to the filters underneath or off to the side. I went ahead and purchased one. I’ll add pics once it’s all done, now that my pro is shipping. :

That’s a smaller version of the unit I’ve been using - it does a fantastic job of reducing the smells. I bought it to run at a Maker Faire, where it did the trick, and I’ll be using it outside my house, to reduce the impact on neighbors. It’s not good enough to use indoors in a small enclosed space - I’m relying on the Glowforge filter to do that trick.

Note that eventually you’ll have to replace the carbon canister. In agriculture they get replaced annually. No idea how often replacement will be required for laser printing - much stronger smells to filter out, but more occasional. Anyone know from experience?

Working on the dedicated workbench for my GF. I installed the ventilation system and now I am securing the top. I will sand and wax the surface soon. The single plug on the back is connected to the “Start/Stop” button on the front and the dimmable light switch runs the 200CFM fan internally. Finally the outlet is for things like charging my phone and whatnot while I am working. I wired everything to spec for 20 amps as well. Finally, the whole thing can pop-up on its wheels and move around quite nicely and still sit very firm when retracted. I did this for going to makerfairs and whatnot. Overall I am happy with how it turned out. 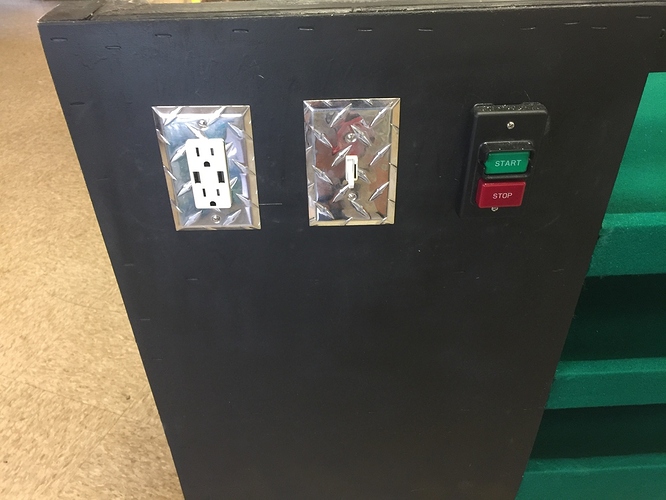 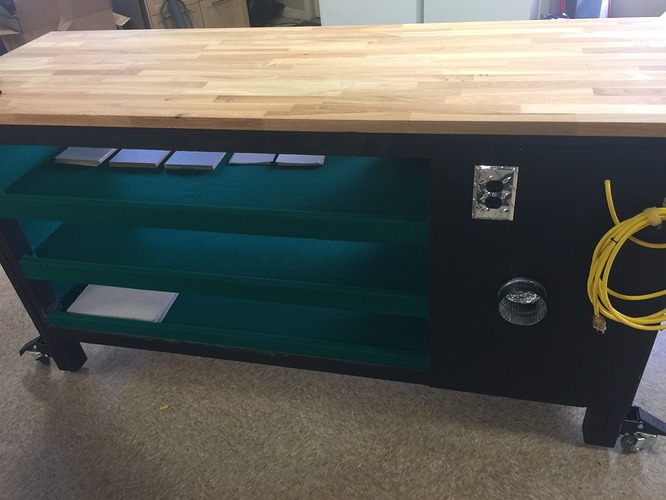 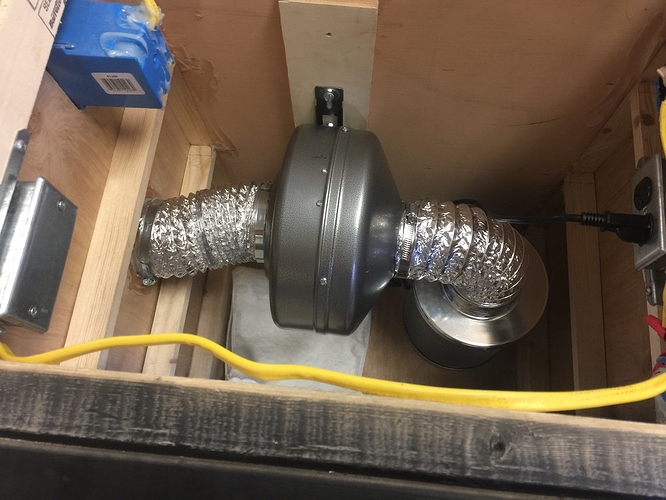 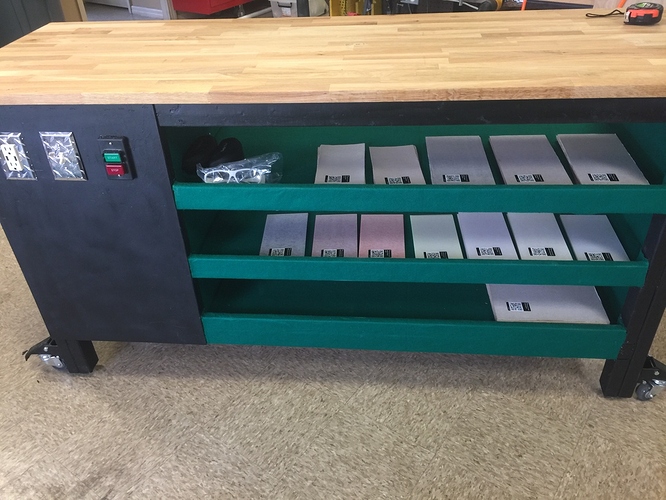 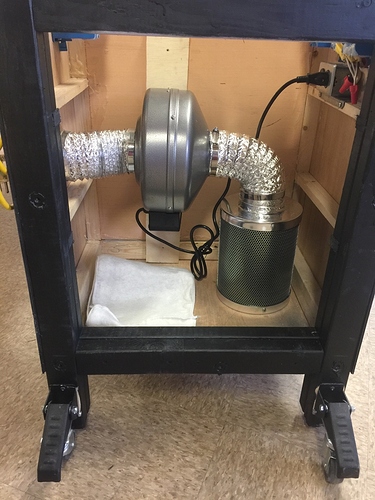 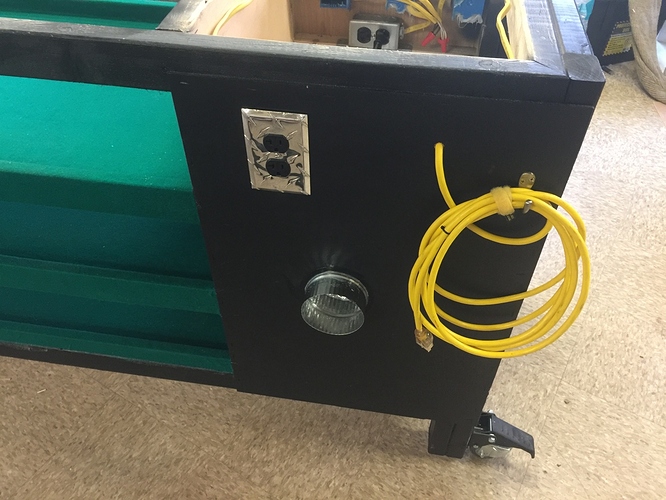 VERY. Nice! (You ought to build those to spec for other Faire goers.)

I had the IKEA table top from their scratch and dent section. I managed to pick up 7 of them for $50 each. Really I tried to keep the build as cheap as possible. I used 2x3’s instead of using 3x3’s because the price difference was about $22 per table leg. Overall I spent some money on the felt and the wheels but I wanted it to be portable and the felt will keep the material from getting scratched up. It was definitely a labor of love and now I just need my GF.

Also, I made the end panel that covers up the ventilation system removable so I can service the equipment inside. It also has a screen to allow the air to escape. I may still put a filter on that as well but I am not sure it’s needed. 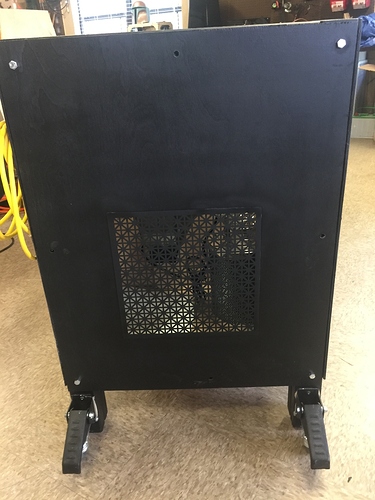 Thanks for the comments.

That’s pretty sweet… I’ve got that exact same booster fan and barrel filter being shipped to me. How is it for noise?

I was wondering about those wheels. It looks like they’d lift smoothly as you step on them, but do they drop suddenly when released? I’m assuming you lift them with the toe of your shoe to unlock?

It’s really quiet. I also connected it to a dimmer switch so I can control the speed

Since you flip one at a time, you can control how it drops down. They support up to 800 lbs as well.

I’ve used the same filter system and gave it a test last night. Seemed to do a pretty good job extracting and filtering - but what do I know? I’m pretty new to this stuff. I’m planning to jerry-rig a HEPA filter to the box that I have the Australia Charcoal Filter in to help clean it more.

I need this type of solution until a) my filter arrives or b) I figure out how to vent externally in my modern house which doesn’t have traditional windows.

Do you folks think this will be adequate for the various materials for now? Including Acrylic?

Do you folks think this will be adequate for the various materials for now? Including Acrylic?

Caveat: I have that same setup. I haven’t tried it on my GF yet.

…but insofar as acrylic? Comparative to wood, Acrylic is really smelly. If you equate ‘odor’ to ‘toxicity’ and have the aim of completely eliminating the smell of it, you’re going to be disappointed. The only way to completely avoid acrylic smell is to dissipate it outdoors and to its much greater volume of air.

But if you want to reduce the significant smell by capturing some of the more offensive off-gasses, then yes, that should work. But you’re going to be storing the components of those smelly gasses in the cylinder filter, where you’ll still smell them if you’re in the immediate vicinity. And you’ll have to change the charcoal more frequently if you’re doing lots of acrylic.

Thanks for the thoughts, Dan. Sincerely appreciated.