Super excited to share this with you guys! This is the thing I’ve been waiting for the most, and it turned out pretty awesome! I picked up some .25" poplar from Home Depot tonight and decided to see how it held up to 3D engraving. Well… check it out! 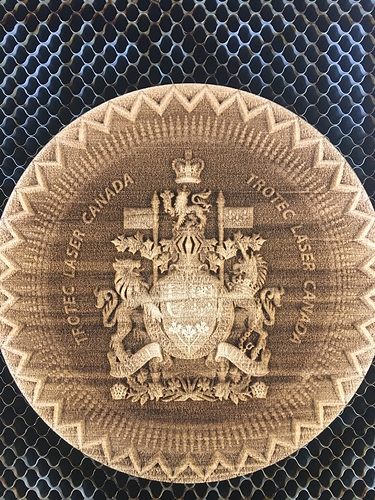 After the first pass: 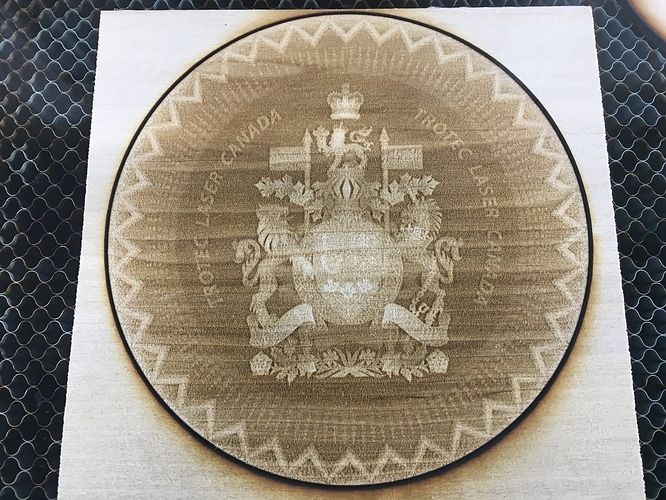 During the second pass: 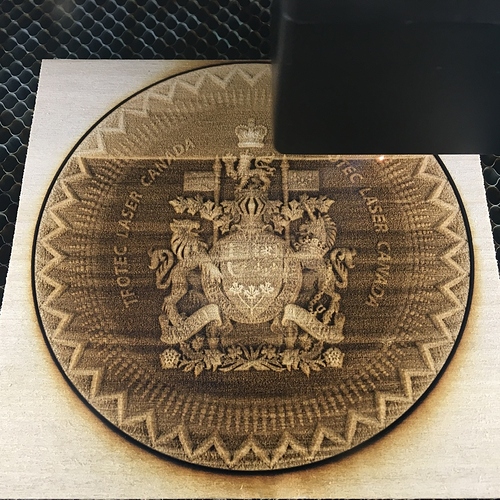 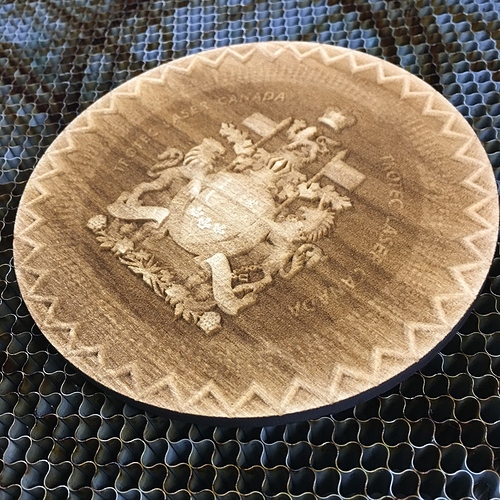 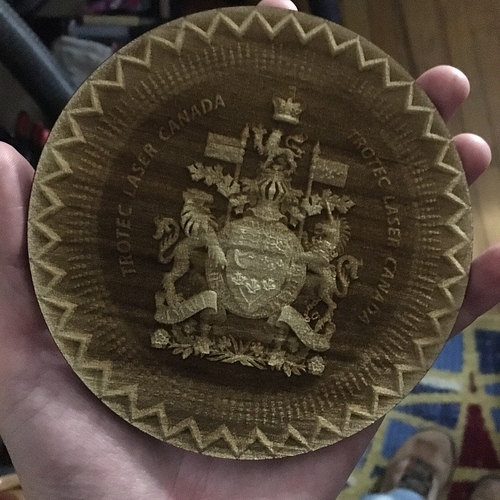 Ahh, for a minute I was wondering why you were showing off a Trotec video, then I read it heh.

Wow! That looks pretty awesome.
I apologize in advance for the barage of questions, but this is very exciting.

Did you set it up manually or do they have the 3D engrave function working?
Have you tried it with Proofgrade hardwood?
How long did it take?
In your opinion, how does it compare to the Tortec version from the video?

Did you set it up manually or do they have the 3D engrave function working?

I did this manually. I was running engrave tests on the poplar I picked up, and wanted to see how it would do on 3d, as it didnt seem to burn much at all even on really slow speeds.

Have you tried it with Proofgrade hardwood?

I have not! I probably will at some point. Maybe not this exact engrave, but one similar. Now that I know I can do it, im going to start making some depth maps of my own =)

How long did it take?

If you look above the first image there is a specs section that details everything. First pass was about 30 minutes, second pass about an hour.

In your opinion, how does it compare to the Tortec version from the video?

It turned out pretty good! They were using better quality wood, and ran 4 passes on theirs. I only did 2 on this one, so its not going to have as much contrast in the detail as if I would have run it through 4 passes. I really wasnt even planning on doing this tonight, but it came out so well by the second pass I just had to share.

Thank you for indulging my questions! Can’t wait to see some of the other 3D engraves you are going to do!

Awesome! I feel our

are getting closer with this

This is very good. Thanks for the demo. I know you have been working hard on these things. Not too bad for a engrave time.

Looking good. Thanks for sharing your tests.

That’s fantastic! Thanks for sharing!

It’s really interesting to see how much the underlying texture/density of the wood comes out. Has anyone engraved MDF (which should in theory be uniform)?

Are the horizontal streaks artefacts from the wood grain or the engrave process?

Yeah that’s the wood grain. This is Home Depot material, so it’s not hand picked for engraving, but it works pretty well

Wow! Awesome work – it is beautiful!

What?! You can 3D engrave? Fantastic!! Excellent work.

I take a weekend off for moving, and wake up to this – so exciting!

Aye, I spent a good bit of time this weekend testing a number of materials for cut depth and detail holding ability. Theres a pretty big variance. I picked up a bunch of materials last night that I want to try out soon as well.

I just can’t wait to see what you’re able to do! Super, duper exciting.