As the final touch for the Cat Perch project we figured we needed some sort of cat toy, so I had the idea to hang a dog tag in front of the shelf. So i put a mouse on one, but one of the staff suggested I put the hospital logo so when anyone takes a picture of their cat, it will have the hospital info on it. 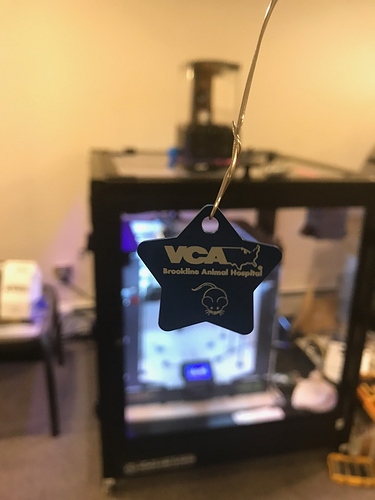 Originally I was just going to use copper wire, but I figured A) it bends and stays bent too easily and B) how is that crazy enough for me to have done it.

So I realized I had a pack of expired sternal sutures… yeah the things we wire your chest back together after open heart surgery. It’s a high grade springy stainless steel. 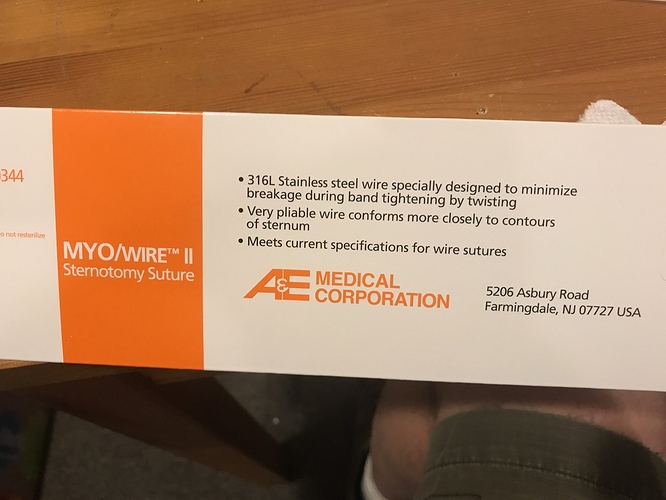 Then I cut a little escutcheon and engraved a channel into a second plate to hold the wire in place. Behind the escutcheon are a pair of fender washers to clamp the wire. There is a small dab of epoxy over the end where it is twisted to blunt the sharp end. 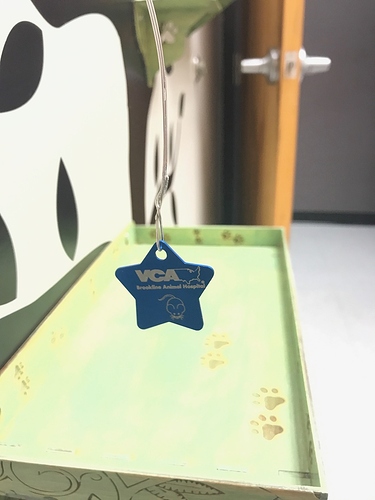 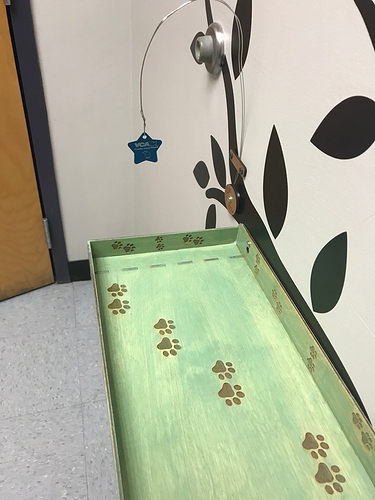 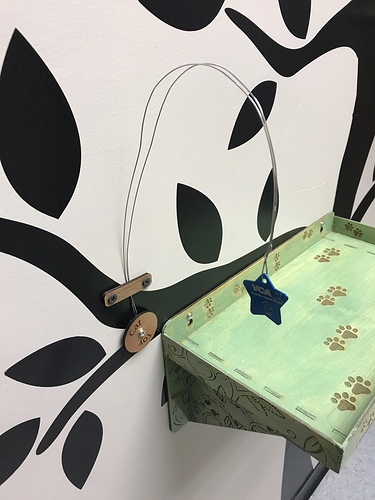 A stunt kitten was fetched by my daughter who is home from college and loves animals. 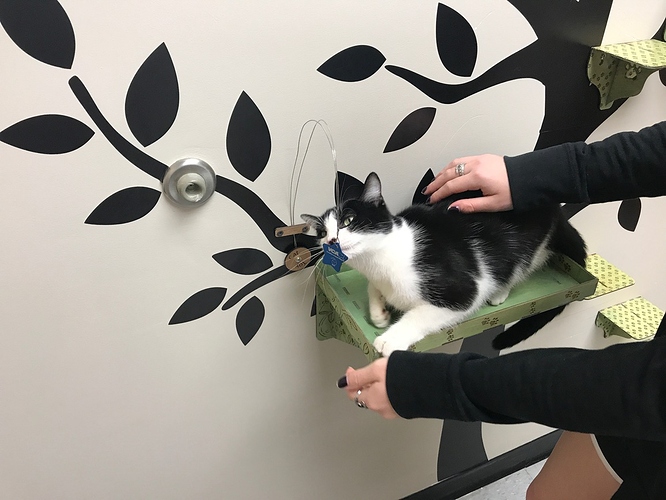 OK, the kitten has a 2 second attention span, and the beta test went awry… 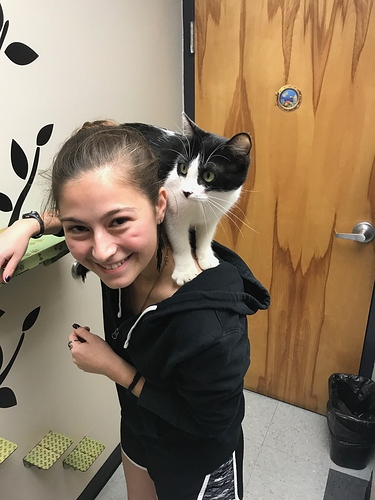 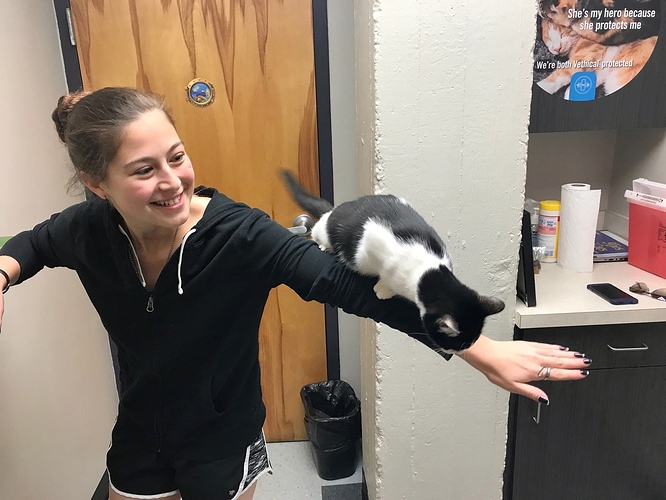 That little mouse on the tag is so stinking cute! (Could smear a little catnip oil on the tag…might increase the attention span to 3 or 4 seconds for the pics.)

Oh man, curse you and all your enabling! Now I’ve got to get me some high grade springy stainless steel.

Just kidding. It’s a great project and I’m sure it will be appreciated by the client kitties!

So I realized I had a pack of expired sternal sutures… yeah the things we wire your chest back together after open heart surgery. It’s a high grade springy stainless steel.

Just curious, but why in the world (besides medical device manufacturer profit margins) do they expire??

Just curious, but why in the world (besides medical device manufacturer profit margins) do they expire

In this case the concern is how,long the sterility can be maintained. Presumably there is some lifespan on the polymer of the package seal.

Stainless wire can also be found commonly as safety wire. Usually used in Avionics or Race Car applications. It is passed through a hole drilled in the the bolt head to keep them from turning in high stress, high reliability applications. Wrapping safety wire is an art form in itself.

I picked up a spool of it with my Powdercoating kit where it is used to make hangers for parts being coated, and while in the oven. 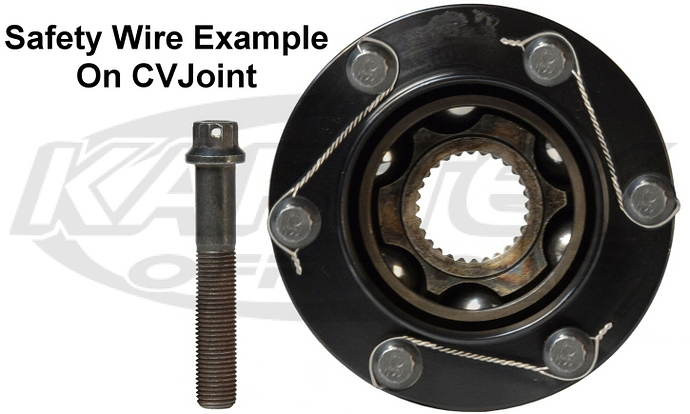 All three are incredibly adorable

Truly is an art!, We did several trade show models of some airplane landing gear and had to do this. Took several attempts to get to look correct!

We just got into this at my hospital. Stuff we bought that was “just good” suddenly had expiration dates imposed. If we could pop open sterile packages from WWI and it was still sterile 70yrs later, it’s all about profit at this point(and why the heck is it good for 360 days only?!)

it’s all about profit at this point

Or lawsuits and resulting liability concerns.

it’s all about profit at this point

Or lawsuits and resulting liability concerns.

My guess is it’s actually the former, using the latter as the excuse. There’s no reason we can’t have packaging that keeps sterility for years and years.

The short answer is the medical device space is regulated by nearly every country you can sell into.

It’s about what the manufacturer has records to prove. This becomes a real PITA when you want to make a change that has to be proven over shelf-life. If you have a one year shelf-life and you make a change you have to make several lots and put them in storage for a year. It can become a lot of money and time waiting to prove something before you can start to sell it. The longer your expiration dates the longer you spend waiting on changes and improvements. So it’s a judgement call factoring in, how long do we need for our customers, how long can we prove, how long do we need to be competitive and how short can we be so we can release new product quicker than the Vatican updates policy. Why have 20 year shelf-life if 99% of your customers only stock six months of inventory?

While no manufacturer is going to complain about you buying stuff and throwing it away just to buy more stuff, in my experience you lose more than you ever make on it. Distributors and customers hate managing their inventory for expiration (but they do it) and will jump at the first guy to come along with a longer expiration date. As it will take you possibly years to extend your own expiration date that is a long time to leave the market to the other guy.

And to clarify not every change requires going through shelf-life testing. Larger manufacturers may have an accelerated shelf-life testing protocol that doesn’t make them wait the full term, but they have to have records that prove their protocol is equivalent and that takes time and money.

Now for pictures of the first dog that thinks it can stand on one of those shelves!!!

I don’t think that’s the issue. Its like lots of other stuff with “expiration” dates - still fine but perhaps not quite as fine. With a box of frozen vegetables or a bottle of milk, no big deal if it’s not quite as perfect after the expiration date. In a lawsuit happy industry anything less than 100% performance is an invitation to sweep someone into a lawsuit just to add to the potential pool of payors.

There’s a state in this country that has laws about labelling things “new and improved” because that implies there was something wrong with the previous version which might still be on the shelves.

General aviation is a great example - for years, half the price of a small plane did nothing except pay for the manufacturer’s insurance premium on that plane. People could sue and win arguing manufacturing defects for something built 50 years earlier. So innovation ground to a halt. To get anything new you needed to go to the experimental market. You know, new things like alternators instead of generators on the engine.

Anyone gets a post-op infection and they can prove the doc used a 5 year old needle and they’ll argue that it couldn’t possibly be sterile. And a jury of the best & brightest amongst us (yeah, right) will believe them. How does a manufacturer prove it was good? It’s been disposed of. They can go to the expense of opening and testing hundreds or thousands of old packages and proving those were sterile. And the plaintiff’s attorney says “but you don’t know they’re all good…isn’t it possible the seal was compromised over 5 years of handling & storage?”

Well, that comment specifically was “why 360 days?” and not say 1 year… but no… it’s just a couple days short of a full year… just kind of a screwy that it’s that many they picked… I’m guessing THAT was to guarantee yearly profit.

Well, that comment specifically was “why 360 days?” and not say 1 year… but no… it’s just a couple days short of a full year…

Not uncommon. There are often legal issues related to UCC warranties based on predicted life being less than or more than a year. Less than a year removes a lot of potential liability just because of a few days. It’s simply a matter of everyone needing to draw a line somewhere as any date is going to be arbitrary - the regulator lawyers picked 1 year, the manufacturer picked 5 days less to keep under the 1 year. 360 days is a nice round number vs 361 or 364.